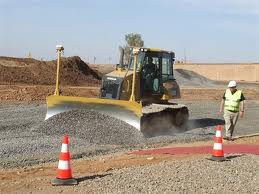 Caterpillar and the LiDAR Division of Velodyne Acoustics, Inc., have announced an agreement that allows Caterpillar exclusive rights of use and manufacturer for Velodyne’s patented HDL-64 LiDAR-sensing system, which incorporates proprietary laser-imaging technology, that will be used for off-road vehicles, in the areas of mining, construction, quarry and aggregate, earth-moving, and worksite planning when used on any vehicle designed for those markets.

“The agreement with Velodyne’s LiDAR Division provides yet another valuable tool for Caterpillar as it works toward implementing machine technology that promotes safety on worksites while increasing the efficiency and profitability of the operation,” said Geoff Ginzel, Cat Electronics product manager for software technology and information products.

LiDAR (Light Detection And Ranging) technology enables a vehicle in motion to send out pulsed laser light signals and to time the return of the reflected signals to calculate a real-time distance measurement at light speed. The laser signals are safe for human eyes and offer many advantages over radar, such as providing return signals from a wider variety of materials at greater distances and with more useable points. The system instantaneously provides a high-resolution image immediately compatible with computers.

According to David Hall, chief executive and founder of Velodyne Acoustics, Inc., the HDL-64 LiDAR system incorporates 64 spinning lasers and accumulates 1.3 million points per second, allowing the system to create a high resolution virtual map of its surroundings. “We believe this agreement will help advance LiDAR-based technology in the future, including Velodyne’s interest in self-driving cars,” Hall said.

“This exclusive contract with Caterpillar is a validation of Velodyne’s laser technology,” said Stuart Woods, executive vice president of Velodyne Acoustics, Inc. “It allows Caterpillar to immediately benefit from our years of technology development, and it provides Velodyne with funding to enhance the efforts of our Advanced Research Group and Audio divisions.”

About Velodyne Acoustics, Inc.
Velodyne Acoustics, Inc., located in California’s Silicon Valley, established its roots over 30 years ago in audio technology. Velodyne’s legacy has been built upon a reputation for designing high performance, low-distortion bass subwoofers and subwoofer technology. The company’s LiDAR division evolved after founder and inventor, David Hall, competed in the 2004-05 DARPA Grand Challenge utilizing stereo-vision technology. Since its first commercial sale in 2006, Velodyne’s LiDAR division has emerged as the leading developer of laser imaging technology. Today, Velodyne continues to build on its iconic history by introducing groundbreaking technology and design to tr