/ Feature / Going Down Under Down Under: Brisbane’s Complex Airport Link Achieves Innovation and Cuts Costs

Going Down Under Down Under: Brisbane’s Complex Airport Link Achieves Innovation and Cuts Costs 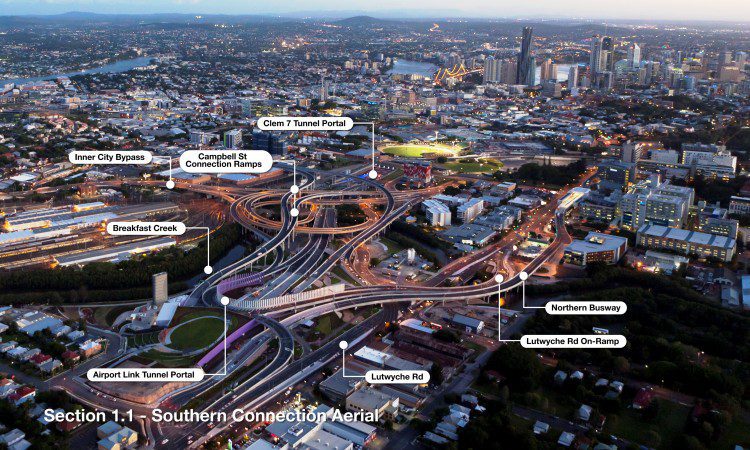 When the city of Brisbane, Australia, and its suburbs needed to reduce heavy congestion going to, from and around Brisbane Airport, Brisbane City Council initiated development of a massive infrastructure project to solve the problem. The council’s goal was to reduce traffic congestion by 45 percent, fixing notorious roadway bottlenecks and minimizing travel time to the airport for people living in northern suburbs—all while improving overall connectivity with the city.

The project consisted of two tunnels and a new airport connection: 6.7 kilometers of a mainly underground Airport Link toll road as well as the Windsor-to-Kedron section of Northern Busway and an upgraded interchange improving access to the Brisbane Airport precinct. Once built, these roadways would become a vital addition to Brisbane’s road network, linking the city’s northern suburbs and two of southeast Queensland’s most important economic centers: the airport and the city.

Each of the three distinct projects had to be designed and constructed concurrently due to the tightly integrated nature of their alignment and surface connectivity.

“We identified early on that we couldn’t deliver the entire project using conventional methods and a team located in a single office,” explains Andrew Lewis, an associate at Arup as well as structural modeling leader for the roadway project. “So we teamed up with Parsons Brinckerhoff in 2006 to form the Parsons Brinckerhoff–Arup Joint Venture (PBAJV).”

Together, PBAJV bid and ultimately won the design and construction of all project phases.

“In order for our global, distributed teams to work together efficiently, we had to create an integrated project team of 2,400 staff working in almost 50 different offices,” states Mark Patis, technical executive at Parsons Brinckerhoff. “To do this, we chose to deploy Bentley’s ProjectWise to create an engineering collaboration tool and 24/7 data source. We also used integrated Bentley software to support all design and documentation phases of the project, further enhancing team performance for a successful outcome.”

Each of the three distinct projects had to be concurrently designed and constructed.

The project’s sheer size and complexity brought huge collaboration challenges, including coordinating and managing design teams; ensuring people worked on the latest project information; and the massive number of drawings to be produced and reviewed.

“Our challenge was finding a way to manage the production of nearly 600 design packages that would involve more than 20,000 design drawings and an estimated 2 million documents over the course of the project,” states Patis.

At the same time, the PBAJV team faced unique engineering challenges, as the Airport Link project involved the design and construction of underground roadway interchanges, multiple bridges, a large “jack box” structure, and connection to an existing interchange. For example, the Kedron Interchange involved constructing a unique, multilevel interchange that combined surface roads, elevated flyovers, multiple bridges, underground ramps and merges/diverges, which work together to provide free flow for all traffic movements.

“What sets the Airport Link tunnels apart is the integration of surface interchanges and the tunnels,” explains Patis. “This brings with it huge challenges in terms of geometry, road safety, tunnel fire and life safety, and constructability. In one location, five levels of roadway exist. The road geometry associated with these elements, combined with poor geological conditions, required some innovative design solutions to allow construction.” 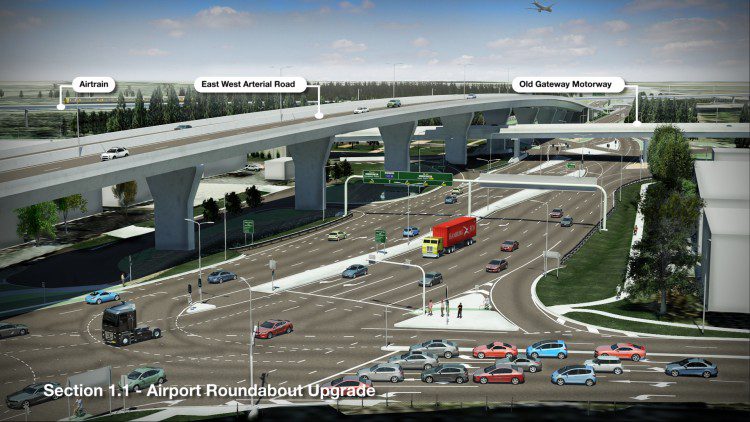 Paving the Way to Success

Given the project’s large scale and complexity, the joint project team would require strong document-control systems and processes across all project documents—especially when moving into the design phase.

“It was clear we would not be able to deliver this complex project via conventional methods and processes,” adds Lewis. “After evaluating a number of solutions to address these issues, we selected Bentley ProjectWise as our EDMS collaboration tool.”

“We worked with Bentley services to have everything up and running within three weeks of the project being awarded,” explains Lewis. “Eventually, we had 2,400 staff in different geographic locations, all working from a central document store, in conjunction with seven caching servers to provide a global collaboration environment.” 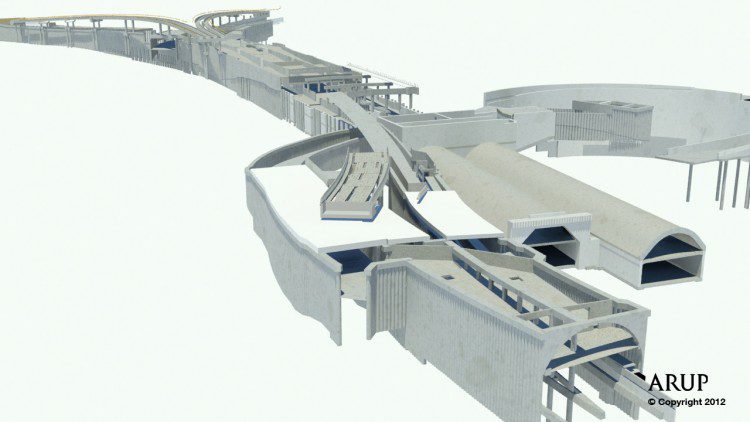 “ProjectWise was central to the success of the project because it made data available across a web of cache servers throughout the Parsons Brinckerhoff and Arup networks,” notes Lewis.

Having a single source of truth for project data across the entire project team enabled both organizations to utilize and mobilize their global skills pool more efficiently.

“With ProjectWise, people were able to find documents much faster,” adds Lewis. “We did a very conservative estimate of the time savings we realized, taking just 1,000 of the 2,000 staff into account. Over a 12-month period, we saved at least 23,000 hours of employee time because people could find things more quickly. And this number doesn’t take into account savings gained because project teams consistently worked from the most up-to-date information, which minimized rework.”

“The Airport Link project was the first major project undertaken by the designers using the referencing and integration capabilities of ProjectWise with MicroStation and MXROAD,” states Patis.

MXROAD, which was used to design all roads, tunnel and earthworks as well as some structural components, enabled multiple designers to work concurrently within tight designated geographic areas across the project and share information via ProjectWise.

A rigorous version-control process was employed via customized macros and routines within the MXROAD design process, linking the 3-D road model and alignment drawings to ensure that the most-current design data were used projectwide. Integration of MXROAD and ProjectWise also made it easy to employ skilled remote resources across Australia and internationally without having to relocate people.

All major structures, including bridges, cut and covers, caverns, vent stations, and control buildings were modeled in 3-D, using MicroStation, Bentley Structural and InRoads. RAM Concept was used for the structural design of some of the control buildings and operations centers, and Bentley Rebar for 3-D modeling and scheduling of complex tunnel elements.

Using 3-D modeling for all design elements enabled interdisciplinary coordination and collaboration by allowing engineers to exchange models among the various disciplines. For example, road designers exported MXROAD design strings and surfaces for use by the structural team, and then the 3-D structural models were referenced directly in MXROAD.

Models of the geological surfaces were generated using Bentley’s gINT and then imported into the road and structural models to accurately assess the geological conditions at critical locations. gINT data also were transferred to GIS software and used to develop a complex engineering model of geologic conditions that was imported into MX and MicroStation.

The structural models were reviewed interactively against the various strata layers and borehole logs. In addition, 3-D models made it easier to check clearances for tunnel structures, sumps, plant rooms and equipment. For emergency evacuation routes, equipment clearances and complex geometry, verified structural models were analyzed by geotechnical, tunnel and structural engineering teams, and then issued to the contractor for set-out, formwork detailing and quantities. Version-controlled 3-D models also helped stakeholders quickly review the correct designs and validate integrated versions. 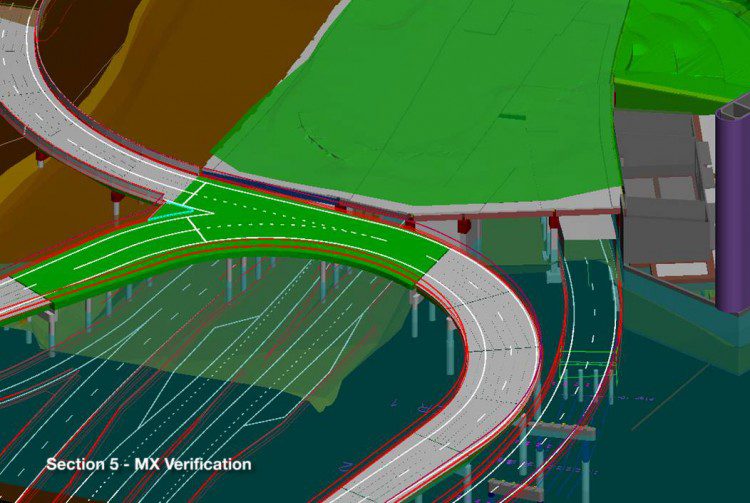 3-D models made it easier to check clearances for tunnel structures.

With Bentley software, PBAJV substantially reduced the amount of time needed to design and build the entire project.

“We streamlined the interdisciplinary review process, which allowed the design team to deliver 30 design packages per month—a demanding workload,” explains Lewis. “We also were able to reduce response times for requests for information during construction as well as the number of site instructions and design updates during this phase.”

ProjectWise enabled both organizations to substantially reduce the need for travel and accommodation on the project, as people could work and collaborate remotely using a single, trusted data source. Lewis estimates that for every 100 people that could work from home, PBAJV saved AUD 3.6 million every 18 months.

Using ProjectWise, a team of only five document controllers could manage the receipt and issue of all documentation on behalf of the PBAJV team.

“Considering there were 50 separate design offices and 2 million documents, it is not unreasonable to estimate that an additional team of five document controllers would have been required to manage this process had we not used ProjectWise,” explains Patis.

Five additional document controllers over an 18-month period would have cost about AUD 1 million—money PBAJV was able to save.

Using MXROAD and ProjectWise together, 22 designers were able to design in parallel by sharing files via ProjectWise. As a result, PBAJV completed work within tight timeframes, shared data in a timely manner, and ensured aggressive construction schedules were met.

“The parametric modeling function of MXROAD, through design input files, enabled a repeatable design process,” adds Patis. “As a result, alignment changes resulting from updated survey and ground-condition data could be distributed amongst the entire project team with a high degree of confidence in accuracy and completeness of data.”

“In review time alone, I’d estimate that an additional five designers would have been required if we hadn’t used Bentley software,” notes Patis. “Based on an 18-month design program, this would equate to about AUD 1.4 million in savings.”

Similarly, by using Bentley software to develop 3-D models for 17 cut-and-cover structures and 25 multispan bridges, the structural design team was able to work with a much smaller team. PBAJV estimates that by eliminating use of conventional methods for detailing, coordinating and set-out of all structures in a 2-D environment, they were able reduce the team size—and costs—by the equivalent of seven drafters.

By the end of the project, ProjectWise hosted 2 million documents, 4.8TB of data, and 20,000 as-built drawings and sketches. A vast, geographically distributed team worked remotely as a single, cohesive unit to deliver the largest road infrastructure project—and public-private partnership—in Australia’s history. And people living in the city of Brisbane and its suburbs are able to enjoy a much improved quality of life.

Ron Gant is industry marketing director - Roads for Bentley Systems, with 13 years of professional engineer experience working in the electrical utility industry as well as a design/construction engineer on major fossil and nuclear power projects.