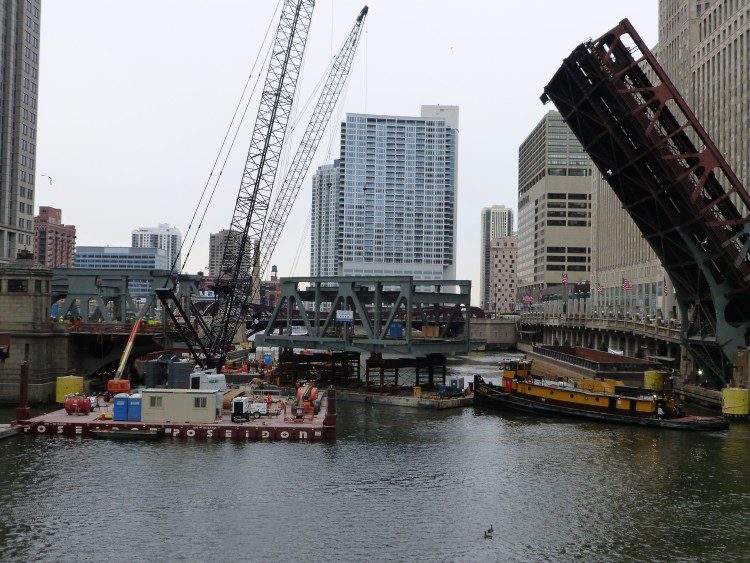 The Wells Street Bridge holds the distinction of being the longest double-deck, double-leaf, bascule bridge built over the Chicago River, and it’s one of two remaining bascule bridges in the city that carries both highway and rail transit on dual levels. The Chicago Transit Authority (CTA) elevated railway occupies the upper level, and vehicle, bicycle and pedestrian traffic are on its lower level. The bridge’s main span is 345 feet long and 72 feet wide, with three lanes of vehicular traffic, a bicycle lane and cantilevered sidewalk on each side.

The bridge was built in 1922 and is on the Illinois Historic Bridge Survey. It had numerous members with extensive corrosion as well as sections that exceeded their useful lifespan. The demands of heavy traffic and working commuter rail line required bridge rehabilitation to be performed with minimal disruption to transit service and the traveling public.

Phase I and II engineering for this project were performed in coordination with the Chicago Department of Transportation (CDOT), Illinois Department of Transportation (IDOT), CTA and other stakeholder agencies. It included comprehensive inspection, bridge condition reporting and a final bridge design. CDOT chose AECOM to rehabilitate and perform engineering services. 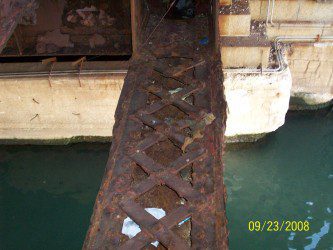 Today, there are 40 moveable bridges in Chicago, the most moveable bridges in any city in the nation, and second to Amsterdam in the world. Development of the Chicago trunnion-style bascule bridge occurred during the first three decades of the 20th century. Chicago needed a solution that allowed frequent river crossings without impeding navigational traffic.

The bridge is basically a teeter totter (bascule in French) that uses a truss and floor system counterbalanced by a concrete counterweight. The bridge pivots about a shaft (trunnion), raising its leaves into a nearly vertical position. The trunnion shaft supports the entire weight of the bridge and is located near the center of gravity of the mass. The counterweight is lowered into a watertight pit along the river when the bridge is raised by electric-powered machinery.

This structure is unique as a multi-modal facility serving pedestrians, automobiles, bikes, trains and boats.

Bascule bridges in the United States are considered landmarks, but their maintenance and rehabilitation is challenging and costly. For the main bridge structure, a major rehabilitation to restore the bridge required replacing a number of main truss members along with the entire upper- and lower-level framing systems, including lateral bracings. Repairs included numerous superstructure and substructure elements along with mechanical and electrical components.

Due to the bridge’s historic status, most elements such as the railings, bridge houses and major structural components were replaced “in-kind” to preserve the structure’s historic look. The existing paint had extensive deterioration throughout, so the entire bridge received new paint. New sidewalks consist of fiberglass decking along with new railings to match the look of original historic railings. Both historical bridge houses received repairs to roofs, walls, windows, plumbing, electrical and mechanical components.

The plan took a balanced approach that allowed for salvage of significant portions of this historic landmark bridge structure. Many historical elements of the bridge houses and structure were preserved and retrofitted to help save natural resources as well as preserve the bridge’s history. A key element was recreating the look of the historical cast-iron railings and light fixtures to bring back the original characteristics of the 1922 bridge. 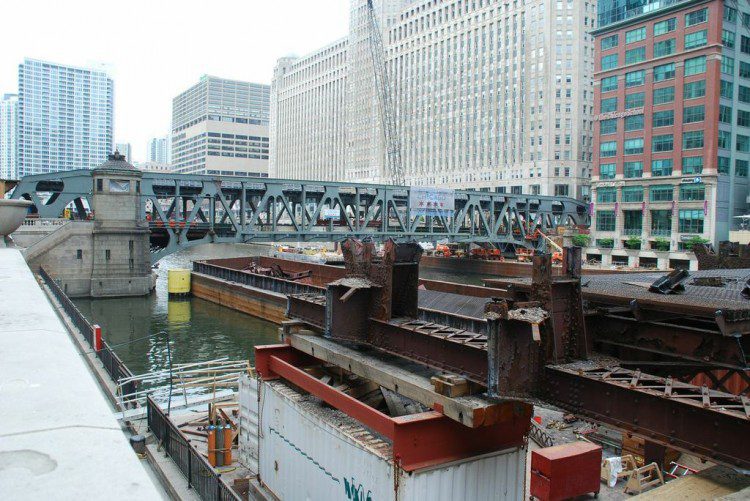 The 90-year-old structure was extremely deteriorated and badly needed replacement—several bridge components far exceeded their useful lifespan. However, most bridge users are on trains, with 75 trains traveling daily over the bridge’s upper portion. The rail lines are a critical link that connects northside commuters to the many businesses in the Chicago “Loop,” or Central Business District, as well as tourists exploring the city.

To successfully complete the reconstruction work, effective communication and coordination with the CTA was critical. Shutting down train operations across the bridge for just a night would have caused a major inconvenience, and shutting it down for months to complete rehabilitation work via traditional methods of construction was unacceptable. Understanding these impacts, the project team conducted extensive coordination with CTA to determine allowable windows for track shutdowns.

AECOM worked swiftly and diligently with CDOT and CTA to achieve a “balanced” solution that provided safety for all users, minimized public impact, maintained Transit Service Continuity and built a better bridge.

The project faced many challenges during the planning, design and construction phases. The first key challenge was determining how to repair the truss with the least impact to transit services. The second challenge became evident after the repair solution was finalized. Because the bridge was located over the Chicago River in the heart of the city, nearby streets weren’t available to stage material.

The project had to rely entirely on marine equipment for staging, including material delivery and removal. This requirement posed a challenge of its own, because the Wells Street Bridge was required to open several times weekly during the spring and fall months to allow river traffic to pass through. As a result, the team developed an innovative staging concept that allowed the project to be constructed in only two shutdowns of nine days each, while allowing one leaf to remain operational at all times to allow boat traffic.

The third challenge was the schedule. The repair plan called for removing and replacing the “river arm” truss portions of each leaf, including replacing the bridge’s entire upper- and lower-level framing. The Wells Bridge design, although predominantly structural, also includes significant mechanical and electrical engineering components. Long lead times for procurement of material became a concern, because the nine-day shutdown was going to occur in the winter months. In addition, the contract had significant liquidated damages ($250,000 per day) for late completion of the milestones.

To meet the aggressive construction schedule, AECOM worked with CDOT to develop an Advanced Steel Procurement Contract to fabricate the entire truss assemblies offsite and then float the completed truss assembly (upper- and lower-level framing included) down the Chicago River to the project site. 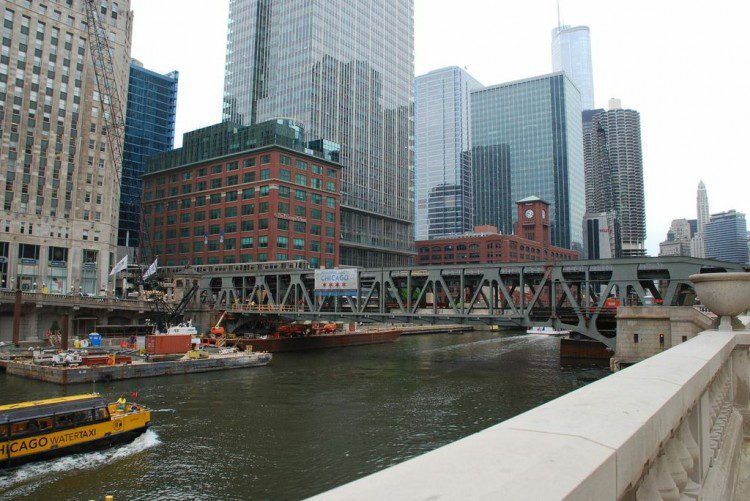 To accomplish a long-term fix, the decision was made to replace the “river arm” portion of each truss: all truss members from the center joint to panel points—about two-thirds the length of the truss. Such major rehabilitation couldn’t be accomplished during weekend shutdowns, so AECOM worked diligently with CDOT and CTA to find a solution.

CTA was planning to perform loop track repairs around the same timeframe as the Wells rehabilitation, and these repairs would require additional weekend shutdowns. Therefore, a joint decision was made to coordinate these two independent projects (by CDOT and CTA) to reduce impacts to train services. This approach saved at least $500,000 by eliminating closures.

The bridge was rehabilitated one leaf at a time, with temporary shoring under the counterweight box for the leaf under construction. Working on only one leaf at a time allowed one leaf to remain operable to accommodate river traffic, which was a requirement of the U.S. Coast Guard.

To expedite the process, CDOT purchased new truss steel under a separate contract. With pre-fabrication offsite, rather than stick-built onsite, the staging scheme had to be “foolproof” to ensure truss replacement within the nine-day construction window. The connections between existing and new truss were complicated design elements, and the project’s success hinged on accurately replicating the connections offsite to ensure that bolt holes for new and existing steel aligned perfectly. The concern over proper fit-up was heightened because the new trusses were supported on barges in the river that were subject to wave currents and fluctuations.

Load-balancing calculations associated with movable bridges are cumbersome and require good bookkeeping of weight added and removed from the bridge. To operate efficiently, the bridge has to be perfectly balanced at the pivot point or trunnion girder, which supports the bridge’s entire dead load.

Balancing occurs when the resisting moment equals the overturning moment; the main weight for the resisting moment is the counterweight—a solid concrete box with adjustment pockets to receive one-foot by one-foot cast-iron blocks. The pockets allow the bridge to be adjusted for future conditions by removing or adding blocks.

To accomplish this goal, AECOM developed a “delta” approach to balancing by only comparing the weight removed vs. the weight added during rehabilitation. The bridge was made lighter by using fiberglass sidewalk grating, removing the original jack beams at the roadway level, reducing the number of stringers and connections at the roadway level, and reducing the floorbeam weight by using high-strength steel. In addition, the counterweight box was made lighter by removing all the excess counterweight material not contained in the counterweight pockets and utilizing only half-filled pockets.

The Wells Street Bridge is a unique example of a major bascule rehabilitation in one of the most-constrained construction sites possible. With thousands of users crossing it daily, and years of corrosion evident, the Chicago Department of Transportation had to invest in a full rehabilitation of the structure to add several decades to its useful life. The design team balanced the need for in-kind replacement of historic elements with the need to upgrade systems with current technology to improve operation and lifespan.

After the train shutdowns and interim balancing, the remaining structural work was completed as well as the mechanical, electrical and architectural rehabilitations. Although the window to perform the work was extremely tight, the “river arm” replacement was completed ahead of schedule.

“It’s been the most challenging project of my 20-plus-year career with Chicago Department of Transportation,” notes Daniel Burke, deputy commissioner CDOT. “From planning through construction, the amount of thought, effort, coordination and scheduling involved has been immense. The full rehabilitation of the similar Lake Street Bridge in 1996 took about 12 months. This portion of the Wells Street Bridge reconstruction is slated to be completed in just nine days. This is as difficult as it gets, and we’ve never done anything like this before.”

Dipal Vimawala, PE, is vice president and Bridge Practice Leader for the Midwest region of AECOM. He was the project manager for the Wells Street Bascule Bridge Rehabilitation Project in Chicago, involving the design concept, coordination and interdisciplinary reviews while overseeing development of the Construction Documents.

Comments are disabled
NEXT ARTICLE
Going Down Under Down Under: Brisbane’s Complex Airport Link Achieves Innovation and Cuts Costs
June 7, 2015
PREVIOUS ARTICLE
The Internet of Things: Coming to Facility Systems Near You!
June 7, 2015