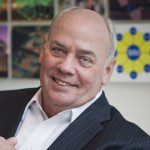 Patrick MacLeamy is CEO of HOK, a global design, architecture, engineering and planning firm. He has been a proponent for greater efficiency, going back decades with his conceptualization of the MacLeamy Curve, which emphasizes design earlier in the project process. Although his concept pre-dates building information modeling (BIM) software, it has been greatly enabled by this technology as well as the new contractual arrangements (such as IPD) that place more responsibility for positive results on the designer.

The MacLeamy Curve aims to rearrange how much time and effort architects spend on effective and thoughtful design. Such change requires realizing that the current process for project delivery doesn’t achieve the best possible product, and leads to an inefficient design and construction process.

MacLeamy counters too much emphasis on documentation rather than design as well as the broken exchange of information among project stakeholders. Although the design, build, operate and maintain process requires an exchange of information among an architect, supporting engineers, contractors, subcontractors, fabricators and owners, that exchange process currently is far from seamless.

“The original intent of the MacLeamy Curve was to improve the quality of the design and process all the way through, so we know before we’ve moved the first shovel full of dirt that everything will fit, we can afford it, it will be energy efficient, it will meet the client’s program and it will fulfil all the other criteria. We can’t get there unless we have open and interoperable BIM,” says MacLeamy. 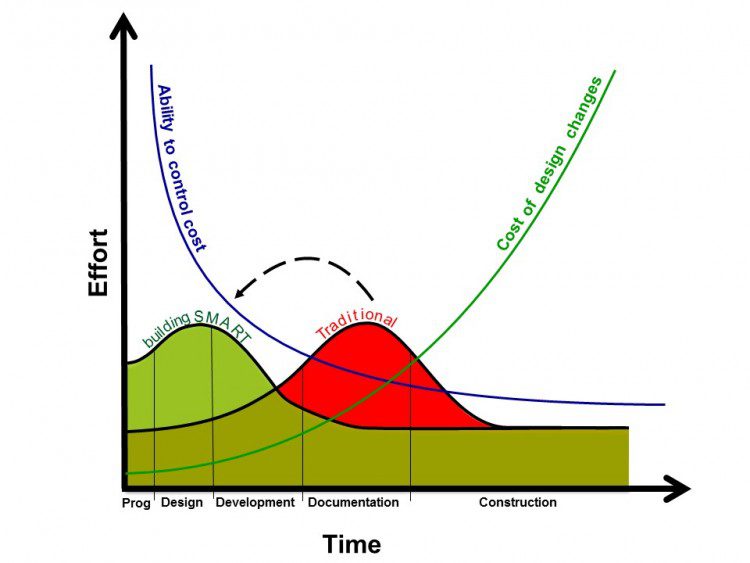 “I realized roughly 20 years ago, after talking with some of my colleagues, that we’re spending too much time producing the work, but not enough time designing and being thoughtful about design,” adds MacLeamy. “We need to switch the roles to put more effort into designing and have the working drawings or documentation phase much more automated.”

Using the existing arrangement, many issues that should have been resolved in the design process don’t get resolved until later at the documentation stage or when the building is constructed, which adds a great deal of time and cost to the process. The architect and contractor have developed an adversarial relationship, where the architect is practicing defensive design by creating drawings that give the contractor only minimal information.

BIM software allows computers to do more of the tedious tasks of working drawings, freeing architects to be more thoughtful about designing and shifting design effort forward in the project timeline.

The old days of master builders, with its peak prior to the Early Renaissance, involved guilds of craftsmen who increased their project responsibility as their skillsets grew. Those who designed structures had a lifetime of experience to draw on to build the best structure possible.

This arrangement devolved when architects and general contractors started to distance themselves from each other, and for the last 150 years these groups have been further driven apart.

“We now have laws governing architecture and professional licensing,” says MacLeamy. “We feathered our own nests, but we got so far separated that architects and builders look at each other with mistrust or consider each other the enemy. What BIM is doing, along with enlightened owners, is forcing us to design and build as teams. I think it is extremely healthy and goes back to our historic roots.”

The design-bid-build process is at the center of today’s conflict, as it doesn’t foster collaboration. The trend toward design-build-operate and design-build-finance-operate are putting more responsibility for an efficient and well-performing building upon the designer.

“Owners are asking design and build teams to also be maintenance teams—to operate and take care of buildings,” adds MacLeamey. “That’s an exciting development, and it’s further enabled by BIM. A really good, open BIM model, where anyone can add and extract data, enables not only the contractor, but also the operator, to engage with the model. Instead of glorified janitors, we’re seeing professionals trained in the operation process who can operate buildings most efficiently, with properly scheduled maintenance and repair, and properly planning for upgrades and changes to how the building is used.”

Software automation has reached a point where users can apply analysis to various aspects of the project early and often during the design phase to inform the best design.

“All of these testing tools help us immensely,” says MacLeamy. “As an architect, I want to do a conceptual model of my building early on. I want to be able to apply software tools for analysis to see how much it will cost, how energy efficient it will be. I definitely want to see that it meets the client’s building program with the right rooms and spaces, and I want to see how green it will be.”