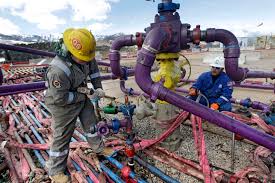 “EPA’s draft assessment will give state regulators, tribes and local communities and industry around the country a critical resource to identify how best to protect public health and their drinking water resources,” said Dr. Thomas A. Burke, EPA’s Science Advisor and Deputy Assistant Administrator of EPA’s Office of Research and Development. “It is the most complete compilation of scientific data to date, including over 950 sources of information, published papers, numerous technical reports, information from stakeholders and peer-reviewed EPA scientific reports.”

EPA’s review of data sources available to the agency found specific instances where well integrity and waste water management related to hydraulic fracturing activities impacted drinking water resources, but they were small compared to the large number of hydraulically fractured wells across the country. The report provides valuable information about potential vulnerabilities, some of which are not unique to hydraulic fracturing, to drinking water resources, but was not designed to be a list of documented impacts.

These vulnerabilities to drinking water resources include:

Also released today were nine peer-reviewed EPA scientific reports (www.epa.gov/hfstudy).  These reports were a part of EPA’s overall hydraulic fracturing drinking water study and contributed to the findings outlined in the draft assessment.   Over 20 peer-reviewed articles or reports were published as part of this study [http://www2.epa.gov/hfstudy/published-scientific-papers].

States play a primary role in regulating most natural gas and oil development. EPA’s authority is limited by statutory or regulatory exemptions under the Clean Water Act, Safe Drinking Water Act, the Comprehensive Environmental Response, Compensation and Liability Act, and the Resource Conservation and Recovery Act. Where EPA’s exemptions exist, states may have authority to regulate unconventional oil and gas extraction activities under their own state laws.

EPA’s draft assessment benefited from extensive stakeholder engagement conducted across the country with states, tribes, industry, non-governmental organizations, the scientific community and the public to ensure that the draft assessment reflects current practices in hydraulic fracturing and utilizes all data and information available to the agency.

The study will be finalized after review by the Science Advisory Board and public review and comment. The Federal Register Notice with information on the SAB review and how to comment on the draft assessment will be published on Friday June 5, 2015.

For a copy of the study, visit www.epa.gov/hfstudy.