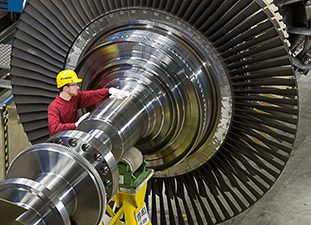 Siemens has signed contracts worth €8 billion for high-efficiency natural gas-fired power plants and wind power installations that will boost Egypt’s power generation capacity by more than 50 percent compared to the currently installed base. The projects will add an additional 16.4 gigawatts (GW) to Egypt’s national grid to support the country’s rapid economic development and meet its growing population’s demand for power.

“With these unprecedented contracts, Siemens and its partners are supporting Egypt’s economic development by using highly efficient natural gas and renewable technologies to create an affordable, reliable and sustainable energy mix for the country’s future,” said Joe Kaeser, President and CEO of Siemens AG. “The Egyptian people can count on Siemens. This was true more than 150 years ago when Siemens first started working in Egypt, and it remains our commitment today at this historic signing.”

Together with local Egyptian partners Elsewedy Electric and Orascom Construction, Siemens will supply on a turnkey basis three natural gas-fired combined cycle power plants, each with a capacity of 4.8GW, for a total combined capacity of 14.4GW. Each of the three power plants –- Beni Suef, Burullus and New Capital – will be powered by eight Siemens H-Class gas turbines, selected for their high output and record-breaking efficiency.

The plants will add power to the grid in stages. Plans call for an initial 4.4GW to go online before summer 2017 and the full 14.4GW to become available 38 months after the financing has closed and advance payments have been received. Once completed, the three power plants will be the largest in the world.

Siemens will also deliver up to 12 wind farms in the Gulf of Suez and West Nile areas, comprising around 600 wind turbines and an installed capacity of 2GW. The company will build a rotor blade manufacturing facility in Egypt’s Ain Soukhna region, which will provide training and employment for up to 1,000 people. The facility is scheduled to go into operation in the second half of 2017.

Siemens’ Financial Services Division (SFS) has structured a financing package for Siemens’ role in the contracts, including a tailored guarantee concept. The envisaged loan facilities, supported to a large extent by Export Credit Agency coverage in Germany and Denmark, will be provided by international and regional banks.

Siemens has been doing business in Egypt since 1859 and has maintained a continuous presence in the country since opening its first office in Cairo in 1901. The company’s technology has been implemented in the Attaka, Nubaria, Talkha, Damietta, Sidi Krir, Cairo West, Ayoun Mousa, Midelec and El Kureimat power plants. Siemens is also a key technology supplier for major projects in the mobility, healthcare and manufacturing sectors.

Siemens AG (Berlin and Munich) is a global technology powerhouse that has stood for engineering excellence, innovation, quality, reliability and internationality for more than 165 years. The company is active in more than 200 countries, focusing on the areas of electrification, automation and digitalization. One of the world’s largest producers of energy-efficient, resource-saving technologies, Siemens is No. 1 in offshore wind turbine construction, a leading supplier of gas and steam turbines for power generation, a major provider of power transmission solutions and a pioneer in infrastructure solutions as well as automation, drive and software solutions for industry. The company is also a leading provider of medical imaging equipment – such as computed tomography and magnetic resonance imaging systems – and a leader in laboratory diagnostics as well as clinical IT. In fiscal 2014, which ended on September 30, 2014, Siemens generated revenue from continuing operations of €71.9 billion and net income of €5.5 billion. At the end of September 2014, the company had around 357,000 employees worldwide. Further information is available on the Internet at www.siemens.com.