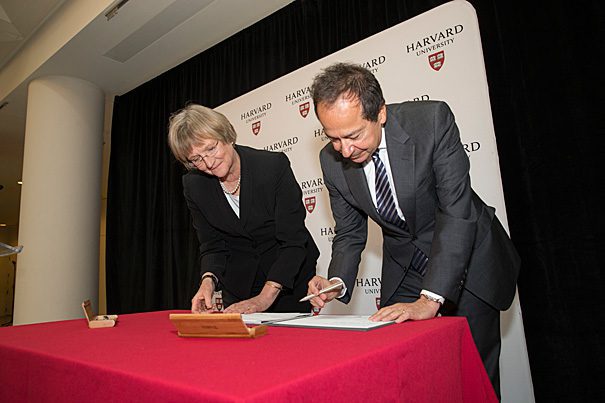 The gift builds on the momentum of Harvard’s $6.5 billion capital campaign, which had reached the $5 billion mark by the close of 2014.

“This is a special day for us all because it’s a day that will enable us to chart the future with bold confidence and enhanced ambitions,” said Faust during the program, which included remarks from Paulson as well as HBS Dean Nitin Nohria, Harvard Provost Alan M. Garber, and Michael D. Smith, Edgerley Family Dean of the Faculty of Arts and Sciences.

“This is a special day,” added Faust, “because it will provide Harvard’s newest School, less than a decade old, with the firm foundations we have strived to build as we have witnessed engineering grow so dramatically, expanding its presence and importance to students and faculty across the University and to the world beyond Harvard’s walls.

Smith called the gift “a landmark day for Harvard University,” and said the donation “will enable students and faculty from all Harvard Schools to harness the power of engineering and applied sciences to address the greatest challenges facing society.”

Paulson met with Faust at Massachusetts Hall in the morning, and later toured a number of SEAS labs and research facilities.

He said he chose to donate to SEAS after meeting with Faust and Nohria and realizing that “a major priority for Harvard was to establish the School of Engineering and Applied Sciences in Allston as the next center for technological innovation,” and he realized that supporting SEAS was an opportunity for his gift to have University-wide impact. Paulson said his gift would support research along with the rising number of Harvard students declaring engineering and computer sciences concentrations, through financial aid and scholarships, as well as through a growing faculty.

“The amount of the gift is large,” said Paulson. “But so are the University’s needs and ambitions for SEAS. To become a leading School in engineering and applied sciences, it is essential that SEAS have a substantial, unrestricted endowment.”

Paulson, who received three standing ovations during the session, said the donation was motivated in part by his own Harvard experience. The Business School offered him resources, opportunities, relationships, and wisdom, he said, and expected nothing in return. He went on to found Paulson & Co. in 1994 with $2 million and one employee. Today the company, which specializes in alternative investments, manages more than $19 billion and employs more than 125 people worldwide.

“There is no question that the support and education I received at Harvard was critical in helping me achieve success in my career. Now I feel it is important for me to do something impactful and meaningful for Harvard.”

Paulson said the donation would help to foster important connections and collaborations among the business, science, and engineering sectors and help to secure Harvard’s place as a leader in technological innovation.