Working Together to Build Drought Resiliency 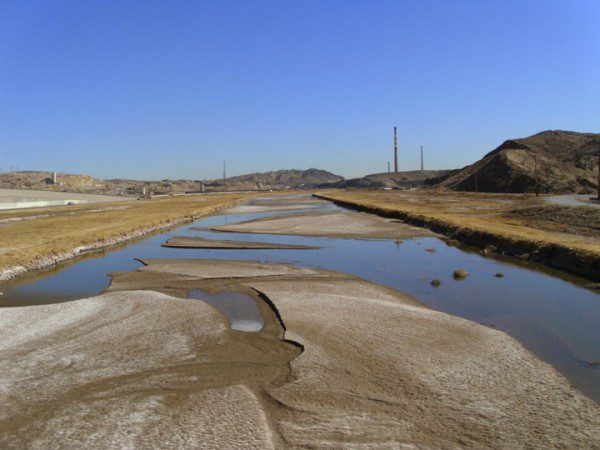 Drought in the southwest has left only a trickle running through irrigation ditches on farms outside El Paso, Texas. The Rio Grande — called Rio Bravo in Mexico — is what supplies that trickle, struggling to meet water demands in three US states and five in Mexico.

As drought continues, and demand grows, researchers like Alex Mayer from Michigan Technological University are looking to new models to improve the region’s drought resiliency. Mayer, a professor of environmental engineering at Michigan Tech, is part of a unique team looking at water resources along a section of the Rio Grande. The National Institute of Food and Agriculture, part of the US Department of Agriculture, has awarded the project a $4.9 million grant to study water shortage and climate change for the next five years in the region.

The area of interest encompasses more than 2.1 million people in El Paso and Ciudad Juárez, which is the world’s largest metropolitan area spanning an international boundary in an arid region. Farmers also grow thirst crops, such as pecans and cotton in the area. In other words, this is one of the most challenging places to sort out water resource issues in a drought.

“Watersheds don’t obey the political boundaries of multi-state, multi-country resources,” Mayer says, explaining that sometimes, science often focuses in on a narrow research question. As an engineer, Mayer adds, he is interested in solving problems. “And to solve problems, you have to get a number of people involved.”

To start, the study requires a lot of different disciplines. Mayer is working with hydrologists, economists, anthropologists and more. And the team is not stopping at academic or political borders. The group spans the University of Texas at El Paso, New Mexico State University, Texas A&M University – El Paso, the University of New Mexico, Michigan Tech and the Universidad Autonoma de Ciudad Juárez.

Interdisciplinary work, the collaboration of scientists across fields of research, is not enough to solve water shortage problems. Mayer says the team he works with goes beyond interdisciplinary into transdisciplinary — and collaborates with local community members, decision makers and non-profit organizations. This isn’t just cooperative gesturing, either; the work gets non-science folks involved in the data gathering and analysis. The process is called participatory modeling.

Kathleen Halvorsen, a professor of natural resource policy at Michigan Tech, has worked with Mayer for more than a decade, helping put together transdisciplinary teams, including a project on water scarcity in Mexico’s Sonora Desert.

“One of the key elements is starting early and putting your team together,” she says. “You need a core of people who have worked together before, who know each other well and have relationships.”

Any romantic-comedy can tell you that relationships are messy; then add regional water resource conflicts to the mix. The result? Not a warm and fuzzy Hollywood ending, but the complexity does enrich the modeling system. And, by having input from local know-how, the modeling tends to better reflect and predict reality.

Agricultural, urban and environmental uses make up most water consumption. In drought, farms compete with drinking water and industry, which are pitted against river ecosystems. This is readily apparent in drought-stricken areas where surface water is drying up.

“The water is becoming more scarce not only because there are more demands on it, but because of the climate,” Mayer says, adding that climate change is not just a steady shift into climbing temperatures — the change is highly variable and often extreme.

Building drought resiliency then is as much about implementing solutions as understanding the problem. Some solutions are straightforward — like installing drip irrigation on farms or building desalinization plants — but they don’t get at the underlying human drivers that exacerbate water scarcity. Water markets, a kind of water management that allows trading water rights in an effort to support conservation, get people’s attention.

“I think that’s why economists are valuable to have on the team,” Mayer says, adding that economists and social scientists help engineers better involve people in water solutions. “Water can be very political — and getting people in one room with access to the same information seems to inspire engaging dialogue.”

That dialogue, Mayer says, is key to making his engineering research effective and the transdisciplinary efforts of his team move forward. The flow of that movement can be rocky and trying at time, he admits, but it sure beats the slow trickle of the Rio Grande right now.