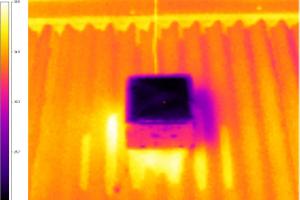 SYDNEY, May 27, 2015—Sydney materials scientists are claiming a breakthrough in cool roof technology with a surface they’ve developed that will stay cooler than the ambient air temperature, even under the mid-summer Australian sun.

The development, with major implications for reducing the heat load in urban areas and consequently cutting energy use and greenhouse gas emissions, is reported in the latest edition of the journal Advanced Science.

The study by Dr Angus Gentle and Emeritus Professor Geoff Smith from the University of Technology Sydney has reported results from a “coated polymer stack” – a combination of specially chosen polyesters on a silver layer.

“We demonstrate for the first time how to make a roof colder than the air temperature around it, even under the most intense summer conditions,” Professor Smith said.

“Roofs heat up by absorbing sunlight, so darker roofs can get very hot. Even white roofs still absorb enough sunlight to warm up by 9 degrees Celsius to 12 degrees Celsius.

“This new surface, however, stayed 11 degrees or more colder than an existing state-of-the-art white roof nearby because it absorbs only 3 per cent of incident sunlight while simultaneously strongly radiating heat at infrared wavelengths that are not absorbed by the atmosphere.

“Furthermore the plastic materials used for the demonstration were available commercially and potentially suited to use on basic roofing.”

Professor Smith said that cooling a roof below ambient air temperature had up until now been “an elusive target”.

“Cool roofing reduces the severity of the urban heat island problem in towns and cities and helps eliminate peak power demand problems from the operation of many air conditioners,” he said.

“The added feedback benefits from cool roofs are not yet widely appreciated, but recent reports have shown they are substantial. Examples include ventilation with cooler air and higher performance of rooftop air-conditioning installations.”

The test roof was placed above busy Harris St on top of the UTS Faculty of Science building with a clear view of the sky and no shadowing.

Data was collected for an unprotected new surface and one aged over several days in a polluted outdoor summer environment for assessment of the impact of the build-up of dust and grime.

Professor Smith said the surface maintained its high performance in all conditions. “Extensive dew formation is inevitable for a super cool roof and dew drops precipitate dirt. This roof site being 25 metres above a busy city transit road was a stern test. Results show that excellent thermal performance can be maintained.

“Much of the world’s population lives in warm climates. Keeping a roof cool saves energy and makes building interiors comfortable in summer. If enough roofs in a precinct are kept cool then the local climate can also be beneficially influenced,” he said.

The work has been supported by an Australian Research Council Discovery Project grant.

The paper, “A Sub-ambient Open Roof Surface Under the Mid-summer Sun”, is available from Advanced Science online as an open access article.