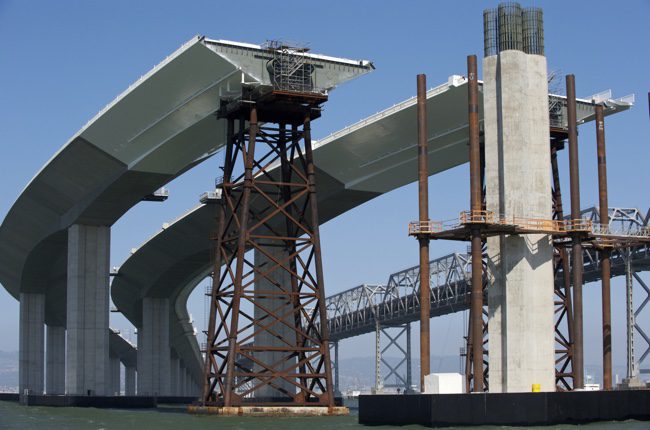 OAKLAND, May 27, 2015—Caltrans today announced completing the first phase of the Bay Bridge tower anchor rod investigation, releasing test results showing more than 99 percent of rods that could be tested were not broken and can withstand major earthquake forces.

“More than 99 percent of the more than 400 rods tested in the Bay Bridge tower foundation are not broken,” said Dr. Brian Maroney, Chief Engineer of the Bay Bridge project. “These anchor rods are just one of many seismic innovations on this bridge that help ensure resiliency of the structure for decades to come. The two rods that did not pass the test will be sent to a laboratory to determine exactly what happened to them.”

Over the past several weeks Caltrans completed pull testing on all 408 of the 424 tower anchor rods that can be tested. The pull test involves a powerful jacking device that grabs and yanks the rods with enormous force to verify integrity.

406 tower rods, or 99.5 percent of bolts subject to testing, passed the pull test and are not broken. Two anchor rods did not pass the test and will be removed and sent to a laboratory to determine the reason for failure. Of the remaining rods at the base of the tower, 14 rods cannot be tested because of inadequate access and 2 were previously removed for laboratory analysis.

In 2013, Caltrans began investigating the condition of all high-strength steel bolts on the Bay Bridge after 32 bolts that were ordered 12 years ago broke after soaking in water. Caltrans found some rods in the tower foundation were also exposed to water and began testing them to determine if any were broken.

Now that Caltrans has verified the majority of anchor rods are not broken, the next phase of testing will help determine how long the bolts will remain sound even after suffering long-term exposure to corrosion in a laboratory. The specific testing protocol is under development and will be reviewed by external experts and the Toll Bridge Program Oversight Committee before testing begins.

The tower anchor rods help limit damage during a seismic event by preventing the tower from rising less than an inch. Preliminary engineering analysis shows that even if all anchor rods were compromised, there would be no safety issue during everyday use or during or after an earthquake.

Engineers and workers involved in the Bay Bridge project are committed to transparency and communicating complex engineering issues as clearly as possible. Engineers have traveled the state meeting with universities, public and private-sector engineers, metallurgists, experts, and even critics—and have posted hundreds of thousands of records online including fact sheets, construction documents, and photos and videos that help explain how the bridge works. Visit www.baybridgeinfo.org for more details.