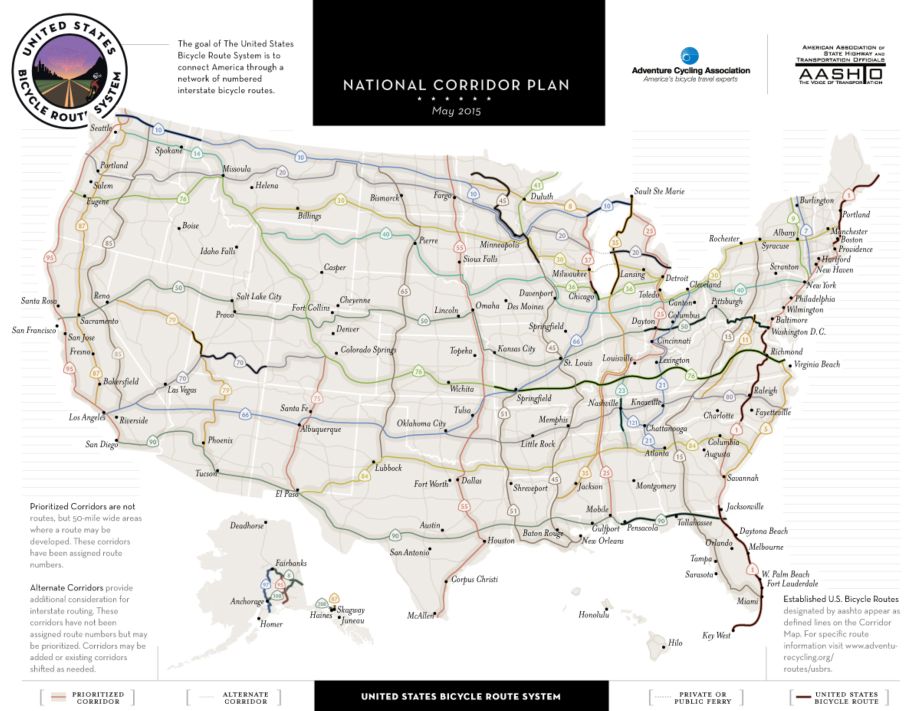 Missoula, Montana, May 26, 2015 — Adventure Cycling Association and the American Association of State Highway and Transportation Officials (AASHTO) today announced that AASHTO has approved 919 miles of new U.S. Bicycle Routes (USBRs): USBR 10 in Idaho and USBR 70 and 79 in Utah. The U.S. Bicycle Route System (USBRS) now encompasses 8,992 miles of routes in eighteen states and the District of Columbia.

“Today’s announcement carries even greater significance because of where the new routes are located,” said Bud Wright, AASHTO’s executive director.  “Utah and Idaho are only the second and third Western states to be added to the US Bicycle Route System, but we’re confident more will follow as we connect the entire nation from coast to coast.”

The U.S. Bicycle Route System is a developing national network of numbered and signed bicycle routes that connect people, communities, and the nation. Similar to emerging international and regional networks, such as Europe’s EuroVelo network and Quebec’s La Route Verte, the U.S. Bicycle Route System provides important recreational and transportation options for the active traveler. Currently, more than forty states are working to develop route corridors into official U.S. Bicycle Routes to be approved by AASHTO at their spring and fall meetings.

”Adding almost 1,000-miles of U.S. Bicycle Routes is a testament to the growing interest in bicycle travel all over the country,” said Jim Sayer, executive director of Adventure Cycling Association. “These designations are the result of hard work by the states and their local partners along with support provided by Adventure Cycling staff. It’s a true partnership for active travel and transportation across America.”

U.S. Bicycle Route 10 includes a 66-mile section that travels through northern Idaho to Montana using U.S. 2, Idaho 200 and local routes. Along the way, the route parallels historic water paths in the Panhandle region and follows railroad beds established more than a century ago.

Brian Shea, the Statewide Bicycle/Pedestrian Coordinator for the Idaho Transportation Department, said, “We are excited to share this new route which includes some of the most beautiful areas of our state with bicycle travelers who, in turn, will provide economic opportunities for our local businesses and communities.”

The route features services in Oldtown, Priest River, Dover, Sandpoint, Ponderay, Kootenai, Hope, East Hope and Clark Fork such as restaurants, bike shops, lodging, campgrounds, grocery stores and emergency services to accommodate the needs of touring cyclists. There are many scenic vistas and points of interest along the corridor as well as alternate routes and side trips aligning with or giving access to the growing trail system in Bonner County.

USBR 10 parallels historic water routes in the region, including the northerly bank of the Pend Oreille River between Newport, Wash. and Sandpoint, the northerly and easterly shoreline of Lake Pend Oreille, and the south bank of the Clark Fork River into Montana. Albeni Falls Dam near Oldtown and Cabinet Gorge Dam near Clark Fork can be viewed and visited along the route.

USBR 10 follows the Great Northern Railway bed between Oldtown and Sandpoint and the Northern Pacific Railway bed between Sandpoint and Montana, both established in the 1890s and in operation today as main rail freight corridors.  The railways opened up the Lake Pend Oreille area some 80 years after the early fur trader, David Thompson, established a trading post near what is now Clark Fork.

The area is rich in trading, mining, timber, fishing, and tourism history.  Many seasonal events occur throughout the area during the touring season ranging from farmers’ markets to cycling events at Schweitzer Mountain Resort to The Festival at Sandpoint, Sandpoint’s music festival. Area businesses welcome touring cyclists and encourage travelers to enjoy the many features of Bonner County.

In endorsing the route, Bonner County’s Board of Commissioners stated, “We recognize that bicycle tourism is a growing industry in North America, contributing $47 billion a year to the economies of communities that provide facilities for such tourists. This community stands to benefit from this opportunity economically and from the health and environmental benefits of encouraging bicycle travel in our region.”

More information and a link to the map can be found on the ITD website.

U.S. Bicycle Routes 70 and 79 combine to create a transverse route across southern Utah that connects the Nevada and Colorado borders.  The U.S. Bicycle Route 79 portion of this route travels 130 miles in a southeasterly direction through the high elevation desert of the Basin and Range Province, providing travelers with a unique scenic experience and unmatched solitude. The route follows paved, two-lane highways through a landscape dominated by sagebrush, piñon pine, and expansive views, and connects to Route 70 in Cedar City, where cyclists can access food, water, and bicycle shops.

The Route 70 portion of this route travels 450 miles through the unique red rock landscape of southern Utah, passing through sinuous canyon country, through high elevation pine forests in theDixie National Forest, and crossing the Colorado River near Lake Powell. Route 70 also travels pastBryce Canyon National Park and Capitol Reef National Park, two of the crown jewels of Utah’s iconic “Big Five” parks. The red rock hoodoos at Bryce and the sprawling vistas at Capitol Reef are truly once in a lifetime sights that all travelers should have on their must-see list. This route follows paved, two-lane, county, state, and U.S. roads, which pass through small, rural towns that provide cyclists with the opportunity to re-supply with food and water.

“The Utah Department of Transportation is pleased that the efforts of all of Utah’s communities and transportation partners are being recognized with the approval of USBR 79 and USBR 70 in Utah,” said Carlos Braceras, UDOT Executive Director. “In Utah we know that biking plays an important role in Keeping Utah Moving, which is helping drive our great quality of life and economy. National bike routes such as these play a significant role in providing active transportation options for the citizens of Utah and the rest of the United States.”

For more information about bicycing in Utah, visit the UDOT website.

Originally designated in 2013, The Minnesota Department of Transportation has realigned U.S. Bicycle Route 45 to incorporate changes in coordination with the installation of guide signs along the entire route.

The route, also known as the Mississippi River Trail (MRT), is now twenty-six miles longer and includes improvements such as: roadway realignments due to construction, improved shoulders on nearby roads, new bridges, opportunities to bring cyclists closer to the Mississippi River, and newly-built off-road paths and trails, which appeal to a broader bicycling audience. The route includes seven percent more off-road facilities, and incorporates long continuous sections of three state trails and numerous miles of regional and local paths.

“MnDOT worked with local communities and Department of Natural Resources partners since 2013 to identify sign locations,” said Tim Mitchell, Minnesota Department of Transportation bicycle and pedestrian coordinator. “In just a few years, our partners made many improvements worthy of a statewide realignment and we are pleased to incorporate them into a route that’s better, safer, and offers an even greater opportunity for adventure and cultural enrichment along one of the world’s great rivers.”

The MRT/USBR 45 connects existing shouldered highways, low-use roads, and off-road paths for bicyclists to closely follow the Mississippi River from the headwaters at Itasca State Park to the Iowa border. The route begins where the Mississippi is just a small stream surrounded by towering white pines. It winds through forests and farm fields, passes through the Twin Cities of Minneapolis and St. Paul and the National Park Service’s Mississippi National River and Recreation Area, and through charming, historic river towns. It offers challenging climbs in the limestone bluffs of southeastern Minnesota, rewarded with long scenic views of the river valley. The route is sometimes on two sides of the river, offering a linear long distance bikeway along with opportunities for short loop rides if crossing from one side to another.

Two ribbon-cutting events and a bike ride will be held this summer to commemorate the project completion. The events will be Aug. 27 in Itasca State Park and Aug. 31 in St. Paul. They coincide with the inaugural eight-day, 470-mile “Headwaters to Hills” tour from Aug. 26 to Sept. 2. For more information about the ride, go to http://www.bikemn.org/headwaters-to-hills.

“With the project completion, it’s time to recognize the partners’ accomplishments,” said Liz Walton, MRT/USBR 45 project manager. “Many MRT cities worked hard to encourage safe bicycling for both for residents and visitors alike and to invite them to enjoy the river and what their communities have to offer. The route celebrates the people, places, and stories that have made Minnesota communities great. What better way to experience all that than on a bike.”

Detailed route maps and other information are available on the MNDOT website.

The Largest Bike Route Network in the World

The U.S. Bicycle Route System will eventually be the largest bicycle route network in the world, encompassing more than 50,000 miles of routes. Adventure Cycling Association has provided dedicated staff support to the project since 2005, including research support, meeting coordination, and technical guidance for states implementing routes. Adventure Cycling recently completed a makeover of the web pages devoted to the U.S. Bicycle Route System with improved layout and easy to find implementation tools, including route criteria, designation resources, and links to official sign guidance documents and studies. Adventure Cycling also provides an updated list of links to maps and other resources for cyclists wishing to ride an established U.S. Bicycle Route on its Maps & Route Resources page.

AASHTO’s support for the project is crucial to earning the support of federal and state agencies. AASHTO is a nonprofit, nonpartisan association representing highway and transportation departments in all 50 states, the District of Columbia, and Puerto Rico. A powerful voice in the transportation sector, AASHTO’s primary goal is to foster the development of an integrated national transportation system.

Support for the U.S. Bicycle Route System comes from Adventure Cycling members, donors, foundations, and a group of business sponsors that participate in the annual Build It. Bike It. Be a Part of It. fundraiser each May.

Comments are disabled
NEXT ARTICLE
Blueprint for a Thirsty World From Down Under
May 27, 2015
PREVIOUS ARTICLE
Road Deaths Continue to Fall, But there are Great Disparities Between Nations
May 27, 2015