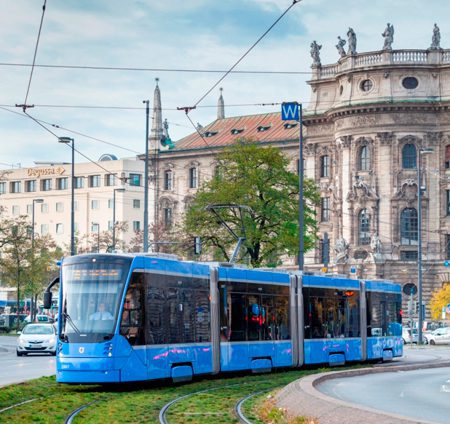 May 26, 2015—Siemens will deliver twelve Avenio M low-floor light rail vehicles to Ulm, Germany. SWU Verkehr GmbH (subsidiary of Ulm municipal authority) and Siemens sealed the deal on May 22 at a contract signing. The order is valued at some 32 million euros. The agreement also includes an option for the supply of six additional trams. The new streetcars are planned for use on the new Line 2. The first vehicle delivery is due within 24 months, around mid-2017. The final vehicle delivery is scheduled for spring 2018. The trams will be manufactured at the Siemens plant in Vienna. The bogies will be manufactured in Graz, while the control and traction drive technology will come from the Siemens factory in Nuremberg.

The Avenio is similar in many ways to the existing Combino with the result that we can offer our passengers a reliable vehicle,” stated Ingo Wortmann, managing director of SWU Verkehr, very satisfied with the result of the invitation to tender concluded mid-2014. He added: “This means that we will be able to operate the two future tram lines from an almost standardized vehicle pool. That will also be economically reasonable.

“This order is an important milestone for the streetcar business at Siemens. After Munich, the order from Ulm is the second one we have received from Germany. All eight new trams have been in service in the Bavarian capital since the start of the year,” explained Sandra Gott-Karlbauer, CEO of the Urban Transport Business Unit at Siemens. “But at the same time the vehicles for Ulm represent a first too. This is the first time a multi-articulated version of the Avenio is being deployed”.

The Ulm metropolitan area is among the fastest growing economic regions in Germany. As a result, it has a commensurate need for mobility in public transportation. The municipal council called on SWU Verkehr GmbH in 2009 to plan a second streetcar line for Ulm. The new Line 2 connects the science district in the north of the city with the central train station, downtown, and Kuhberg to the southwest. The Ulm city council decided on May 6, 2015 with a large majority to go ahead with the construction.

The new streetcar line will have 20 stations and measure 10.5 kilometers long, of which 9.3 kilometers and 18 stations have yet to be built. Construction of the new line and a depot expansion will require an investment of some 192 million euros. Federal and state funds will cover 85.3 million euros of the construction costs. The remainder of the investment will be funded by the City of Ulm. The bus network will also be adapted. This will enable the streetcar to be optimally incorporated into the existing transportation network. The city of Ulm will also designate new residential building areas along the tram line which will provide new impulses in urban development.

A five-car Avenio M will run on the new line in Ulm. The 31 meter long, 100% low-floor light rail vehicle can accommodate up to 175 passengers. A combination of the proven multi-articulated concept with experience gleaned from the Avenio generation makes this possible. The weight-optimized aluminum car body and the already standard Avenio state-of-the-art drive and control technologies minimize energy consumption and save operating costs. The interior of the streetcar is characterized by transparency, giving passengers a feeling of safety and comfort. Amply dimensioned aisles also above the bogies and – in comparison with Combino vehicles – a larger first door improve passenger circulation. During operation, the Avenio M can store and re-use valuable braking energy instead of losing it as heat, which makes a significant contribution to reducing the city’s carbon footprint.

As to its appearance, the Avenio has a different front and rear design to the Combino currently operating in Ulm. The new cars will be given the familiar SWU design with the colors blue, light-gray and white. The typical, curved side profile of the power car will be further developed in line with the current Combino design. Another tradition that will be continued: every car will bear the name of a historical figure linked to the city of Ulm.

Comments are disabled
NEXT ARTICLE
Ten U.S. Cities Now Have 1 Million People or More; California and Texas Each Have Three of These Places
May 26, 2015
PREVIOUS ARTICLE
Global Summit of Transport Ministers Kicks Off in Germany
May 26, 2015