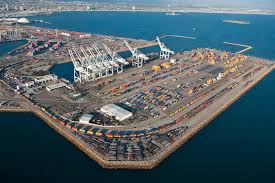 Redlands, Calif., May 20, 2015—Esri, a leader in the development of GIS software, has released a series of interactive story maps illustrating the impact on trade flows through the ports of Los Angeles and Long Beach during the recent dispute over terms of a new West Coast longshoremen’s contract.

Throughput at the West Coast ports was slowed following the expiration of the workers’ contract in July 2014. Agreement on a new contract was not reached until February 2015. Datamyne, a top provider of import-export trade data, supplied the statistical data on the decline and subsequent rebound in the ports’ shipments, which Esri used to create the story maps.

The Esri map series begins with a global view of the world’s trade lanes and ports before tightening the focus on the US and its southern California ports of Los Angeles and Long Beach. A time slider map takes the viewer through 20 years of growth at these neighboring rivals, with data on volumes handled by the ports sourced from Datamyne. The series winds up with Datamyne’s Los Angeles-Long Beach data on TEUs [20-foot-equivalent-units – the measure of volume in containerized trade] before, during and after the labor dispute.

Datamyne and Esri teamed last year to create a cloud-based solution that not only shows where companies engaged in US import trade are on the map, but also links each company’s push-pin to comprehensive information about its business and trade activities. For more information, contact Datamyne at www.datamyne.com.

Founded in 1992 with the aim of clearly and accurately documenting import-export transactions in the Americas, Datamyne has since claimed a top-ranked position in the highly competitive US market for trade data. Headquartered in Miami, Florida, Datamyne today offers the best value in business intelligence: easy access, with expert support, at an affordable price, to the world’s largest searchable trade database. Learn more at www.datamyne.com.

Comments are disabled
NEXT ARTICLE
Autodesk Aims to Ease Construction Scheduling with BIM 360 Plan
May 21, 2015
PREVIOUS ARTICLE
GeoDigital to Partner with PPL Electric Utilities to Better Manage Vegetation for Increased Reliability
May 21, 2015