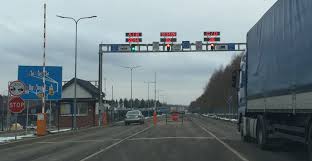 May 18, 2015—An innovative solution for managing traffic queues at international borders is the winner of the 2015 Transport Achievement Award offered by the International Transport Forum at the OECD. The Award recognises demonstrated achievement of excellence in transport provision that has improved, enabled or facilitated tourism.

GoSwift, an Estonian public-private partnership, allows pre-booking of time slots and virtual queueing for border crossings via the web, a call centre or self-service terminals. Better use of the capacity of border crossing points and more efficient journey planning for trucks and tourists are just two of the immediate benefits.

The service was developed as a response to kilometre-long queues of vehicles waiting to cross the EU border from Estonia into Russia. Prior to the introduction of GoSwift, waiting times at the border could reach 5 to 6 days at peak times. With the queue management service, they are now down to around 30 minutes.

Drivers are informed in real-time on the number of vehicles waiting at the border, enabling them to adapt their journey. Designated waiting areas provide secure parking, as well as restaurants, toilets, showers and free Wi-Fi.

The mandatory pre-booking has also cut out illicit trade and eliminated the thriving black market for border crossing slots. The disappearance of truck queues has improved local traffic flows and road safety. The environment has benefitted both locally in terms of less waste, reduced noise and fewer exhaust fumes, as well as globally through less CO2 emissions from idling vehicles.

Trade and tourism statistics show increased activity across the border. Between 2010 and 2013, exports from Estonia to Russia grew by more than 66%, and the number of Russian visitors to Estonia increased by 35% in 2013. The Estonian Association of International Road Transport Carriers estimates that Estonian carrier companies have been able to save 4 Million Euros annually thanks to the GoSwift service.

Following the success of the Estonian project, the same queuing service has been implemented at five Lithuanian border crossing points and at one Finnish border point on crossings to Russia and Belarus.

In awarding GoSwift the ITF Transport Achievement Award 2015, the jury noted the “excellent approach to facilitate border crossing” and applauded the positive impact the GoSwift project has on improving conditions for locals and drivers at the border as well as the wider economic benefits for tourism and trade between Estonia and Russia.

Said Mr Hannes Plinte, CEO of GoSwift: “Launching GoSwift required new thinking from the public and private stakeholders involved. The rapid improvements at the border confirmed that it was the right approach, and we are glad to see our achievement recognised by the ITF Transport Achievement Award.”

Kristen Michal, Estonia’s Minister of Economic Affairs and Infrastructure, commented: “We are glad that the Estonian government made the decision in 2010 to develop and operate an electronic queue at the border. The concession agreement with a private company has proven a pragmatic and highly cost-effective approach. The ITF Award for GoSwift is a recognition for Estonia’s achievements in e-Government solutions.”

The jury also awarded a Special Mention to the project “TRANSDANUBE – Sustainable Transport and Tourism along the Danube”. With its vast natural and cultural heritage and its geopolitical position, the Danube region is one of the most promising tourist destinations in Europe. Transport infrastructure and mobility services vary widely, however, and co-operation among stakeholders has been weak. TRANSDANUBE, developed by the Austrian Environment Agency together with 14 partners from 8 countries (Austria, Bulgaria, Germany, Hungary, Moldova, Romania, Serbia and Slovakia), is successfully creating a framework for co-operation based on an integrated approach to transport and tourism and a common vision of soft mobility. Activities range from new bicycle routes, Danube water busses to tourist packages that do not require use of a private car.

ITF’s Annual Summit is the world’s largest gathering of transport ministers and the leading global platform for dialogue on transport policy. The 2015 Summit convenes in Leipzig, Germany from 27‑29 May 2015.

More about the winning projects at 2015.internationaltransportforum.org/awards