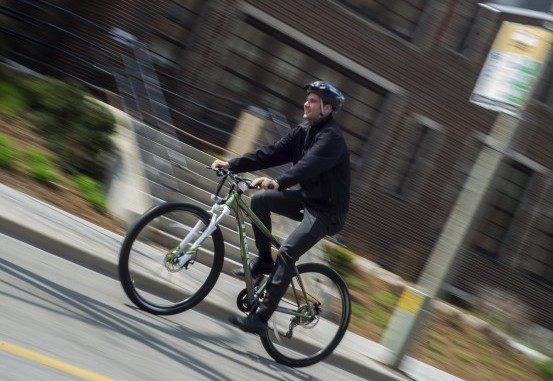 May 15, 2015—A UW-Milwaukee urban planner examines how to make bicycle riding a safe and effective mode of transportation for commuters in cities like Milwaukee.

Robert Schneider, assistant professor in the School of Architecture & Urban Planning, conducts research projects about safety, facility evaluation and the demand for active transportation. Here, he explains why bike commuting is becoming more popular in many cities across the nation.

How does a city like Milwaukee rank in percentage of workers in other places who bike to work?
Since 2006, our share of bicycle commuters has increased from 0.47 percent to 1.14 percent, which is more than doubling the bicycle commute rate in the city changing attitudes. This is a statistically significant increase, resulting in an estimated 2,900 workers commuting regularly by bicycle.

Nationwide, the bicycle commute to work rate is 0.62 percent, so Milwaukee is above the national average. A city like Madison, which is arguably the leading bike community in the state of Wisconsin, has anywhere between 4 and 6 percent of people biking to work. The leading city of more than 300,000 people in the United States is Portland, Oregon. They have a commute mode share of about 6 percent.

Using Milwaukeeans as an example, why are more of us biking to work?
One change is infrastructure improvements. We have a really nice system of trails that is continuing to develop. This includes the Oak Leaf Trail system as well as recent additions of the Hank Aaron Trail, Beerline Trail and Kinnickinnic River Trail. Dozens of miles have been added to the system of on-street bike lanes throughout the city since 2006, and now we have a more connected network. There are still gaps, but there is progress in developing comfortable routes that connect people to more destinations throughout the city.

In addition to bike lanes and trails, what other infrastructure elements can promote biking to work?
More than 100 cities across the United States have implemented various types of separated bicycle facilities. These are sometimes called “cycle tracks,” and they create a space for bicyclists that is not just a painted stripe on the roadway, but a bike lane separated by bollards or parked cars so that you, as a bicyclist, are more physically separated from moving cars.

These separated bike facilities have been shown to increase the amount of bicycling done in a community and make people feel more comfortable while they are biking. There are still questions about how to design them to keep bicyclists as safe as possible at intersections, but they have been very popular in most cities.

What else is contributing to the increase of biking?
When you have in-town redevelopment occurring in the city. Apartments, condos, art studios, and other businesses in that area are all within close proximity of each other and close to other city neighborhoods. That ingredient — nearby workplaces — is a key to bike commuting. As new development occurs in neighborhoods near downtown, many more people are living within two or three miles of where they work, which is an easy biking distance for commuting.

How has culture helped increase the popularity of biking to work?
For many years, biking was seen mainly as a recreational activity, especially in Wisconsin. Some recreational bicyclists commuted to work, but bike commuting had the appearance of a huge undertaking. The impression was that a person needed to go get Lycra and buy a special bike. This image makes biking seem inconvenient to people who have never bicycled to work before.

A cultural change has been happening recently in Milwaukee and other cities throughout the country. More and more people see that it is okay to get on an inexpensive bike, wear their work clothes, and pedal a mile or two to work.

We don’t know the mechanism behind safety in numbers, but it’s probably because drivers become more aware of bicyclists in the environment. Another reason could be that each individual driver is more likely to have bicycled themselves, or they know someone who bikes.

Even with the benefit of safety in numbers, it is still very important to keep improving bicycle facilities like bike lanes, trails and neighborhood greenways, as well as conducting bicycle safety education and enforcement programs to make bicycle commuting as comfortable and safe as possible.