/ Bridges / Paving the Way for Progress Across the Ohio River

Paving the Way for Progress Across the Ohio River 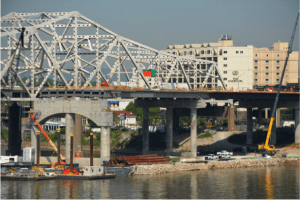 JEFFERSONVILLE, Ind., May 12, 2015—The first concrete has been poured for the deck of the new Downtown bridge, the centerpiece of the Ohio River Bridges Project Downtown Crossing. The pour was made on the Indiana approach, which will provide a critical link from the new cable-stayed bridge to the expanded interstate.

The Indiana approach is made up of five spans, with two of the piers in the river and three piers on land. The three spans over land cross Riverside Drive, the floodwall and Market Street.

The total length of the approach bridge is more than 1,050 feet. The approach extends from the Indiana side of the river to the north abutment, located just north of West Market Street in Jeffersonville, Ind. The abutment is a structure that supports the end of the bridge.

Crews with Walsh Construction have been working from each end of the approach as they construct this portion of the new bridge. Crews have been forming the bridge deck, installing rebar to reinforce it and preparing the bridge deck paving machine, called a Bidwell.

The first deck pour occurred late last week. About 4,000 cubic yards of concrete will be used on the Indiana approach to the new bridge. There are expected to be nine separate deck pours, each taking around 10 hours to complete. The pours will occur during the overnight and early morning hours to avoid the daytime heat. The last pour is expected in June.

The Indiana approach will connect to the bridge deck being constructed at Tower 5, the tower closest to the Indiana shore. The connection is expected to be made this summer. The process of building the deck of the cable-stayed bridge will continue throughout the summer and fall, with precast concrete deck panels being placed on top of structural steel. The concrete overlay, the driving surface of the new bridge, is expected to be poured late this fall.

Nearly 20 bridges and nearly 40 retaining walls are being built in Southern Indiana as part of the Downtown Crossing. Work is focused on I-65 and US 31 near the George Rogers Clark Memorial Bridge.

Lane restrictions started on I-65 in September 2014, with the interstate reduced from three lanes of traffic to two in both directions from the Kennedy Bridge to Brown’s Station Way. Both directions of I-65 traffic have been utilizing the existing lanes of I-65 South.

Crews demolished the old lanes of I-65 North last year and have been rebuilding a new, wider roadway. Two deck pours remain on the new stretch of interstate. Traffic is expected to shift to the new lanes of I-65 North by the end of July. The move will allow crews to demolish the existing lanes of I-65 South and rebuild that portion of roadway.

The current split configuration of I-65 South will end when traffic shifts later this summer, but lane restrictions will remain in place along this stretch of I-65 until late 2016, when the project nears completion.