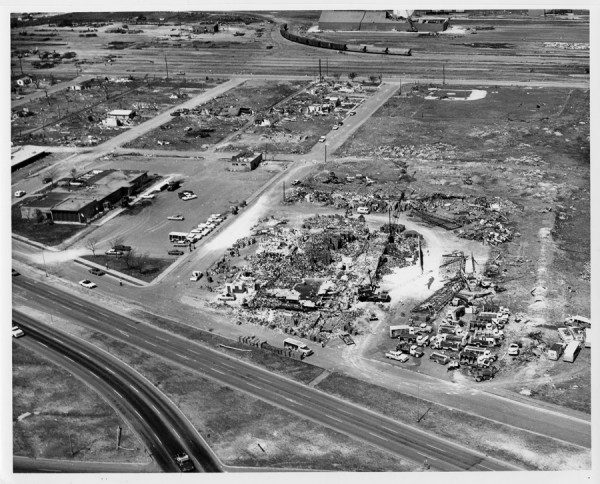 Matt Ball on May 13, 2015 - in Analysis, Corporate, Design/Engineering

Where were you when the tornado hit?

“I had just become become chairman of the civil engineering department at Texas Tech the previous year. When the tornado hit, I was at my home with family, but my wife was much closer to the affected area. We knew it was a tornado that night, but did not know the extent of the damage until the next day.”

How did the tornado change the course of wind research at Texas Tech?

“Until 1970, Texas Tech had no mission for tornado research at all. Lubbock had never been hit by a tornado, so we were not at all prepared or sensitive to the threat. So the tornado became a signature event so far as the history of the program that has become the National Wind Institute.

“The number of damaged homes was unprecedented, and at the time we had a number of young professors looking for research opportunities. When they realized what had transpired, they took cameras in hand and went out into the field to document the wind damage to buildings.”

What was learned by documenting the 1970 tornado?

“At that time, it was thought wind speeds were at the speed of sound. If you were hit, it was simply an act of God and there was nothing you could do about it. In looking at the damaged buildings, we realized that some were damaged more extensively than others. It raised questions about what we could do to improve buildings for wind resistance.

“The young professors published a damage report, which was the first of its kind that we know of. That led to a little funding from the National Science Foundation to do some wind studies. One thing led to another, and we started doing damage documentations for other tornadoes. That was the birth of the program here, and to date we’ve done about 175 post-storm damage documentations.

“It’s gone from nothing at that time, to a world-recognized program in wind engineering.”

What became of those young professors?

“James R. McDonald took an interest in what was the Great Plains Life building downtown, the tallest building affected by a tornado at the time. It was severely damaged, twisted a little bit, and some of that deformation remains, but it was a good safe building. He got involved with the nuclear regulator industry and that provided a huge opportunity for him and us to advise on wind resistance for nuclear power plants.

“Kishor Mehta became involved in writing design standards for wind engineering. He and McDonald developed a new widely-used rating system for measuring the intensity of of a tornado, called the EF scale. (In conjunction with his work at Texas Tech, Mehta is working for the National Science Foundation in Washington, D.C. as program director for hazard mitigation and structural engineering.)

“Joseph E. Minor looked at glass damage. We discovered that glass was failing in wind storms below the speed for which it was designed. Minor did research on what was causing those premature failures and discovered the problems were in how the glass was mounted to the building. He developed a glass testing and research laboratory.

“Richard Peterson, in the Department of Geosciences, helped us understand extreme winds themselves.

“And I took responsibility for the housing program and developed above ground storm shelters.

NWI is also home to world-class researchers with expertise in numerous academic fields such as atmospheric science, civil, mechanical and electrical engineering, mathematics and economics, and NWI was the first in the nation to offer a doctorate in Wind Science and Engineering, and a Bachelor of Science in Wind Energy.