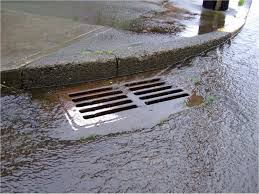 Matt Ball on May 12, 2015 - in Corporate, Design/Engineering, Stormwater

More than half the world’s population lives in metropolitan centers. The built environment of a city is very different from that of rural and natural areas. When it rains over a rural landscape, much of the rainwater sinks into the ground or is evaporated or transpirated by trees, crops and other plants.

Transpiration is the biological process in which plants pull moisture out of the soil by their roots and release water vapor to the atmosphere through small openings in their leaves. Every day, plants release large quantities of water vapor. Growing plants can transpire up to 10 times as much water as they hold in their stems and leaves. These slow, natural processes allow precipitation to replenish groundwater and sustain vegetation, leaving only a small amount of water as overland flow or runoff.

In urban areas, though, when it rains, it pours! City streets, rooftops and parking lots make for hard surfaces that convert huge amounts of rainwater directly into runoff. In a typical city block, stormwater is collected by drains and catchbasins which then convey it underground through sewers. Finally, it’s discharged to a natural water system such as a creek, river or lake. Often stormwater is released without any pollution management. That’s a problem, since as water runs over urban surfaces, it picks up bacteria, heavy metals, nutrients and particulates.

In cities, the source of water that replenishes our aquifers is completely altered. Under natural conditions, aquifers are sustained through the infiltration of clean rainwater and streamwater into the ground. But for urban environments, these sources are cut off by the impervious landscapes. Instead, water from leaky sewers, water mains, septic tanks and landscape irrigation becomes the source for groundwater recharge. Since many of these sources are wastewater, they’re poor-quality sources and can lead to groundwater contamination.

Recent innovations in how to deal with urban stormwater are working to prevent runoff near its source and to provide pollution prevention and quantity control.

Low Impact Development (LID) is a planning and design approach that aims to mimic naturalized water balances. It combines infiltration, evaporation and transpiration while limiting runoff. The goal of LID is to restore processes that are lost in a built-up urban environment. LID includes several types of low-level new and innovative stormwater technologies that together let water infiltrate the ground and evapotranspire into the air.

Green or living infrastructure features heavily in the LID approach. Green roofs are vegetated roof systems that combine plants, engineered growing media, drainage layers and traditional waterproof roof membranes. They can look like rooftop gardens. Bioretention and rain gardens are other vegetated systems, these on ground level, that allow stormwater to soak directly into the earth. These living systems restore evapotranspiration and clean stormwater by filtering it as it flows through the engineered soils.

Permeable pavements allow stormwater to infiltrate slowly into the ground. These pavements can be used for low traffic roadways and driveways, parking lots and pedestrian walkways. There are many different kinds of permeable pavements: Some of the most commercially successful systems include permeable interlocking pavers, grass pavers, pervious concrete and porous asphalt.

Treatment all along the line

Conveyance and end-of-pipe infrastructure are also being reimagined to create a complete treatment train; urban stormwater is managed and treated at all points along its path through the urban environment, rather than only at the end of the line. Sewer pipes can be designed to be leaky to support groundwater recharge. Infiltration chambers use buried pipes or cells to hold back stormwater and slowly release it into the ground to support infiltration. Constructed wetlands clean stormwater and remove nutrients like nitrogen.

Decentralizing stormwater infrastructure creates the opportunity to build resilience and redundancy into urban planning and design, helping communities better prepare for extreme weather events, such as droughts or deluges. Integrating stormwater management throughout a neighborhood – through the use of green roofs, rainwater harvesting, infiltration systems and so on – in combination with traditional conveyance and end-of-pipe infrastructure, allows communities to simultaneously manage stormwater for both everyday and extreme events.

Urban communities must be designed to live in balance with the local climate and environment, whether quite wet or very dry. To achieve this, developers and city planners need to recognize that some places are not appropriate for human development. For example, the Alberta Floodway Relocation Program, created in response to the extensive destruction caused by Alberta’s 2013 Great Flood, is providing financial support to relocate residents whose homes are within river floodplains or flood fringes.

Cities must implement stormwater practices that are climate-appropriate. In the southwestern US, this is occurring through the proliferation of rainwater-harvesting and water-recycling infrastructure. San Diego’s pure water program is aiming to produce one-third of the city’s drinking water supply locally through water recycling by 2035. Space-limited cities such as Chicago and Toronto are experiencing green roof construction booms, which has reduced runoff. In coastal regions, we see an increase in natural infrastructure including wetlands and sand dunes.

Low Impact Development is about customizing technology to address the unique needs of a city. A well-planned community combines small, medium and large infrastructure. By sustaining naturalized water processes within urban environments, we can reduce the impact of the built environment on our water resources. Ultimately, LID combined with green infrastructure will protect citizens during extreme weather events and support healthy urban rivers and lakes.

Comments are disabled
NEXT ARTICLE
1970 Tornado Leads to Development of National Wind Institute
May 13, 2015
PREVIOUS ARTICLE
California Sets Statewide Rules for Desalination
May 12, 2015