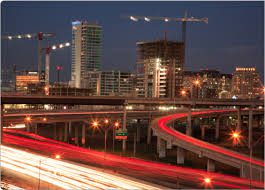 Imagine a future world where roads absorb stormwater rather than allow it to run off directly into waterways; where cost-effective 3-D printed seawalls keep water from reaching commerce centers; where health care centers are integrated into impoverished communities by turning an excess of shipping containers into clinics.

Now, imagine a future where a city plunges into darkness when one link in its electrical grid fails; where major transit routes are continually disrupted by flooding, halting economic productivity; where communities are forced to rebuild from storm after storm, the poorest and most vulnerable populations struggling to get ahead of the next shock.

The first is the kind of world that is built with sustainable, resilient infrastructure — infrastructure that is able to bend, not break, adapt to changing conditions, and allow humanity to thrive within the ecological limits of our planet. The second future is what will happen if we stay on our current course.

This is the choice in front of us. We have plenty of opportunities to change our ways: 70 percent of the infrastructure that will exist in 2050 has yet to be built. The question then is how do we build it with resilience in mind, ensuring people have the ability to prepare for, withstand, and even transform in the face of the shocks and stresses that are characteristic of our 21st century world?

Medellín, Colombia, once known as the murder capital of the world, did just that with transformative results. Addressing the root causes of the violence, city officials recognized that homicide and drug trafficking were greatest in the poorest areas — which were also the most physically disconnected from the economic centers of the city. Now a system of escalators and gondolas connect the hillside slums to the bustling central valley. Health care clinics and day care centers are embedded at transit stops. More than just a transit system, this integrated and multiple-use infrastructure is connecting the most isolated people to opportunity, and has helped bring down crime rates 90 percent.

In other words, transit engineers and city officials achieved what we call a “resilience dividend” — the benefits generated by resilience investments that help cities function effectively and productively in times of crisis and in times of calm.

There are other examples from all over the world. One comes from the proposed Dryline in New York City — an ambitious architectural project born out of Rebuild by Design, a competition spearheaded by a partnership between The Rockefeller Foundation and the U.S. Department of Housing and Urban Development. More than a landscape buffer with floodwalls, the project is designed to offer community and cultural space, recreation areas and markets. In Boulder, Colorado, city planners integrated flood protection with bike lines and transit routes. In the Netherlands, a parking garage also serves as park space and a water storage facility in times of flooding.

Infrastructure is critical to building greater resilience, but it remains woefully underfunded. Estimates show it will cost $57 trillion to build and maintain the world’s infrastructure needs between now and 2030. This is more than the total value of today’s infrastructure. It is also exponentially more than what governments can finance alone. We must find ways to enable partnerships between public entities and private enterprises, and more innovative funding models that partner disparate interests and actors to collaborate and share risk.

One example of this is a partnership between The Rockefeller Foundation and the International Finance Corp. of the World Bank to create a project development facility with the goal of unlocking private sector investment to build more resilient infrastructure in emerging markets. The Rockefeller Foundation is combining its funds and expertise in urban resilience with IFC’s infrastructure expertise and investment capital to help to provide technical assistance and a resilience lens to governments working with the IFC on infrastructure projects. With this guidance, governments can accelerate the number of bankable resilience infrastructure projects that come to market and attract global institutional investors.

This is just one example of how public-private partnerships can help to usher in a new wave of resilient infrastructure, but it’s going to take a change in mindset from every sector to ensure that we are building for a future much different from the past. We can get it right — and see the benefits in our everyday lives, as well as when inevitably, shocks hit. Or we can get it horribly wrong, and spend billions on the next round of relief and recovery, over and over. The choice is ours.

Natural disasters, resource constraints and new patterns of development require companies and governments to plan for energy and other related infrastructure to be both resilient and sustainable. During this monthlong series brought to you by Devex and Bechtel, we’ll explore strategies for deploying sustainable resilient infrastructure to help advance global development. Visit the campaign site Engineering the Next 100 Years and join the conversation using #build100.