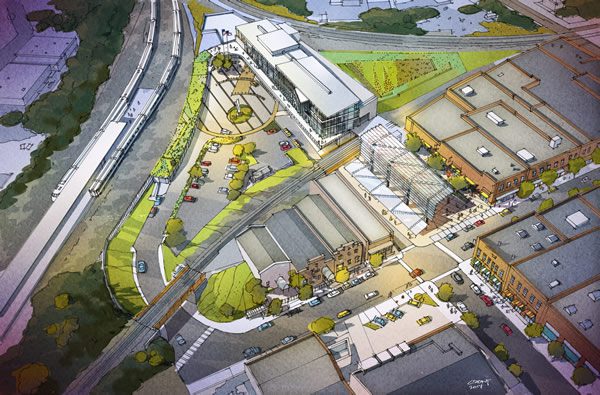 “Raleigh Union Station will allow us to better meet current and future rail needs and provide multimodal connectivity that is critical to the mobility and vitality of this region,” Secretary Tata said. “Investing in rail improvements like this plays an important role in attracting new opportunities for our communities and ensuring our state’s long-term success, and NCDOT remains committed to working with our partners to make this project a reality.”

Secretary Tata was joined at the event by Gov. McCrory, Mayor McFarlane, Congressman Price, and Carlos Monje, assistant secretary for transportation policy for the USDOT.

“Our administration is committed to investing in infrastructure and transportation to help connect all regions of North Carolina with jobs and opportunity,” said Governor McCrory. “Breaking ground on Raleigh’s Union Station is one more example of how the state is working with cities and local communities to achieve this goal. This multi-modal transit station will create jobs and connect people throughout our state for generations to come.”

The new passenger rail station will replace the existing Amtrak Station on Cabarrus Street, which routinely experiences overcrowding and lacks the adequate platform size to serve longer trains. Raleigh Union Station has been contemplated in planning documents since the 1990s and is a significant component in the City’s draft Downtown master plan. This project is anticipated to stimulate additional development in the city’s warehouse district on the west end of Downtown.

“The Union Station project stands to change the economic development potential of the Warehouse District; the station will replace what is currently an under-utilized collection of warehouses and vacant land with a new city landmark that will not only serve as a multi-modal transportation hub but also a civic space with potential for special events and expanded dining and entertainment options downtown” said Raleigh Mayor Nancy McFarlane.

On March 3, the Raleigh City Council authorized proceeding with a modified scope and funding package for Raleigh Union Station. The recommended plan meets the City’s goals and maintains many of the elements included in the “full-build option” presented to the Council by City staff on January 20. The plan increases the funds available for contingencies, and retains the project’s signature design elements, retail and civic spaces, and higher efficiency equipment.

The total budget for the Raleigh Union Station project is $79.8 million, with an additional $1 million held in reserve. The City’s total contribution to the project will be $18 million to $19 million. NCDOT has contributed $9 million in state matching funds, and facilitated the redirection of $15 million dollars in Federal American Reinvestment and Recovery Act funds. The City of Raleigh is the recipient of two grants from the USDOT TIGER program (Transportation Investment Generating Economic Recovery) totaling $38 million.