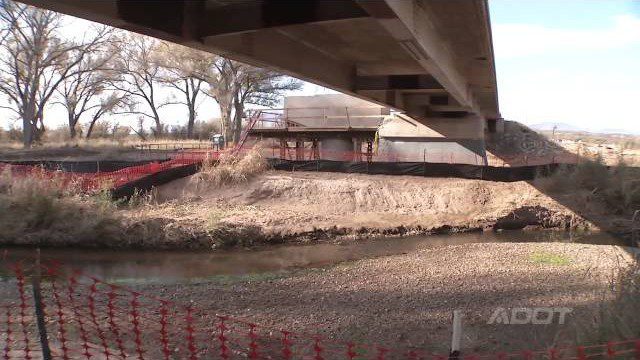 PHOENIX, April 29, 2015—The Arizona Department of Transportation has been recognized for its environmental protection efforts while rebuilding the San Pedro Bridge through a sensitive conservation area on State Route 90 east of Sierra Vista.

Throughout the project, ADOT employed a biologist to monitor construction impacts on the river as well as the more than 200 animal species and 250 migratory bird species in the area.

While the bridge replacement began in October 2012, work halted the following April through October to avoid disrupting the migratory bird season in the San Pedro Riparian National Conservation Area.

Other environmental mitigation measures included a containment plan to prevent debris from contaminating the San Pedro, along with lead paint abatement before the old bridge was demolished. Also, the project included re-seeding vegetation and planting trees.

“ADOT worked to be good stewards of the environment from the planning all the way through the construction of the new San Pedro Bridge,” said Safford District Engineer Bill Harmon. “This environmental award demonstrates ADOT can preserve nature while improving the area’s transportation system.”

The Globe Award recognizes transportation agencies that do an outstanding job protecting the environment in the planning, design and construction of infrastructure projects. The recognition was in the category of bridges costing less than $10 million.

The San Pedro Bridge is an important link between the communities of Sierra Vista, Tombstone and Bisbee. The old bridge, built in 1955, was replaced with a structure featuring wider travel lanes, emergency shoulders and greater clearance over the San Pedro River. The $6.2 million project was completed in March 2014.