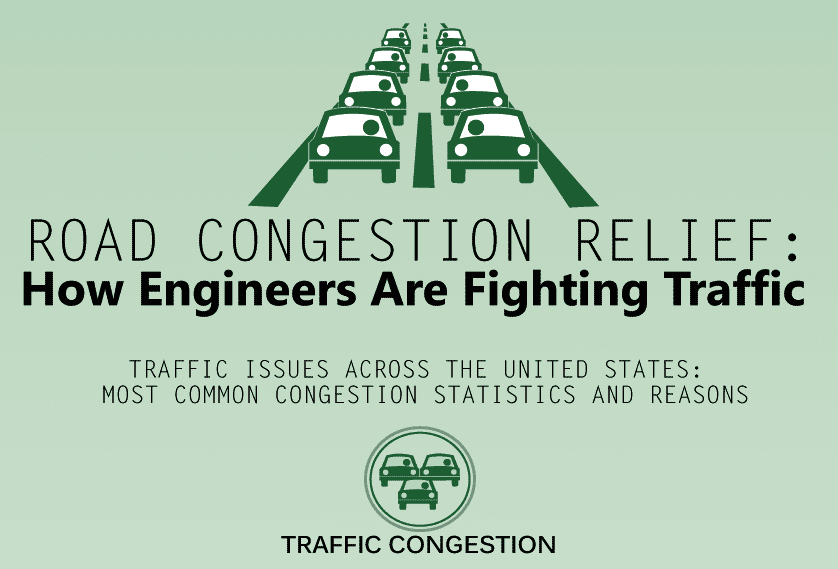 Congested roadways are common problems that all drivers have to deal with. Whether commuting to work or enjoying a leisurely drive through the city, it is a problem that causes a great deal of stress and unnecessary frustration. However, while it is still a large problem, many engineers are dedicating their time and resources to identifying why this problem exists and what they can do to make the problem more manageable for drivers in everyday situations. By understanding the statistics that surround road congestion problems, both engineers and drivers will be that much closer to determining how a solution can be reached. To learn more about how engineers are helping relieve traffic congestion problems, checkout the infographic below created by the New Jersey Institute of Technology’s Masters in Civil Engineering Online degree program.

As more and more people began to purchase personal vehicles, the need for concise road congestion control began to increase. Roadways across the U.S. needed to become more versatile and accommodating for drivers, culminating in recent troubling statistics that encouraged civil engineers to dedicate more time and effort to the problem. In 2013, road congestion increased by six percent, where the average driver would waste up to forty seven hours in traffic over the course of a year. This was the average for traffic hours, and there were some cities that were better and worse off over the year. Los Angeles was described to be the worst city for road congestion, where up to 64 hours per year were wasted by the average driver in traffic. San Jose fared much better at the bottom of the list, with drivers only spent 36 hours a year in traffic. To solve this issue, researchers are looking into primary causes for road congestion and how they can be alleviated.

Among the top reasons for traffic congestions were bottlenecks. This accounted for over forty percent of all congestion incidents, and it occurs when drivers cannot efficiently use the road, whether due to poor lane width, difficult to navigate merge points, or different road grades. About twenty five percent of all road congestion problems occurred from traffic accidents. These included things such as car crashes, disabled vehicles, and the sudden appearance of hazardous debris. Natural problems accounted for fifteen percent of all incidents. Things such as negative weather conditions such as snow or hail and extreme wind comprised this list. The remaining twenty percent were based around predominantly human and pedestrian factors. Construction projects and closed roadways made up ten percent of these errors, and the remaining ten percent was split between malfunctioning traffic lights and other directional problems, and marathons and large political and sporting event problems.

In order to help alleviate these issues, numerous programs are already being suggested. Currently, congestion costs over two hundred billion dollars, with wasted fuel and gas costing upwards of four and a half billion dollars. The average commuter costs per year are as high as $1,020, translating to 45 wasted hours and 25 gallons of wasted fuel. At five dollars per gallon, the average fuel cost for such congestion issues is over 22 billion dollars. With current projected population growth patterns, this issue will only get worse if steps are not taken as soon as possible to help solve the problem.

Among the most popular strategies for helping solve this problem are proposed ways to open up known congestion areas. Freeway congestion makes up forty percent of all problems, while the remaining sixty percent is made up by city streets. Studies also show that trucks contribute to over twenty percent of all urban congestion. Plans are in effect to help make trucks and other large vehicles more efficient in the way they move through streets and other areas, helping decrease congestion. Finally, with such plans available for trucks and buses, plans for public transportation expansion are also in effect to help optimize time on the road and save money.

In order to further optimize solutions, technological advancements are being made to provide real time solutions to congestion problems. With active routing information available, drivers will have more options when it comes to determining the right road to take. Advances in parking technology can also help make parking much more efficient and accessible, which will further reduce urban congestion. Developments planned for the next ten years also involve autonomous vehicles, which can help reduce congestion and human errors in driving. All of these solutions can help make a difference in roadways, improving congestion and helping drivers manage their time and resources better.