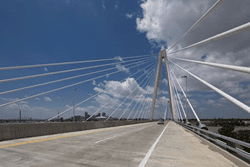 April 27, 2015—HNTB Corporation has earned a 2015 Honor Award for its design, as part of a joint venture, of the I-70 Mississippi River Bridge and Corridor, which is also known as the Stan Musial Veterans Memorial Bridge, spanning the Mississippi River in the St. Louis area. The award was presented by the American Council of Engineering Companies at the awards gala of the organization’s 2015 Annual Convention and Legislative Summit in Washington, D.C. on April 21.

“The new bridge – officially named the Stan Musial Veterans Memorial Bridge – and its corridor are a successful example of multistate, agency, consultant and stakeholder coordination with more than 30 firms working alongside the Illinois and Missouri departments of transportation,” said Rob Turton, HNTB national bridge practice leader and senior vice president. “Our firm not only is honored by this recognition, but thankful to be able to contribute to such a vital component to the St. Louis region’s mobility, safety and economic growth.”

The project connects downtown St. Louis, Missouri, to southwestern Illinois. Designed in half the time of similar bridges, the four-lane bridge carries 55,000 vehicles daily. In addition to the bridge, the project includes the Tri-Level Interchange, the I-70 Connection and the Missouri North Interchange, totaling 6,500 feet of structure and approximately 76 roadway lane miles. With a main span of 1,500 feet, the new bridge is the third longest cable-stayed structure in the United States. The new bridge and corridor allow for the relocation of I-70 off the overcrowded Poplar Street Bridge, reducing congestion and traffic incidents. It is estimated the region will realize an increase of $25 billion in economic activity as a result of the project.

Innovative processes were used throughout design and construction, including the redesign of a previous concept in order to make the project buildable and affordable, while also developing and implementing an alternative technical concept process to minimize the duration and costs of construction. Further innovation included an approach to seismic design that had never been used before on a bridge, and resulted in right-sizing the seismic risk and reducing project cost.

In a collaborative, multistate effort to make the New I-70 Mississippi River Bridge and Corridor project a success, four firms worked together with the Missouri and Illinois Departments of Transportation to lead significant portions of this project.

HNTB served as lead designer for the river bridge and its approach structures in Missouri and Illinois. Other project team members included AECOM, which led the design of the Tri-Level Interchange; US Services Inc., which led the design of the I-70 Connector; and Crawford, Murphy & Tilly Inc., which provided project management and design services for the I-70 Interchange in Missouri.

About ACEC
The American Council of Engineering Companies is the business association of America’s engineering industry, representing approximately 5,000 independent engineering companies throughout the United States engaged in the development of America’s transportation, environmental, industrial and other infrastructure. Founded in 1909 and headquartered in Washington, D.C., ACEC is a national federation of 51 state and regional organizations.

About HNTB
HNTB Corporation is an employee-owned infrastructure firm serving public and private owners and contractors. With more than a century of service in the United States, HNTB understands the life cycle of infrastructure and addresses clients’ most complex technical, financial and operational challenges. Professionals nationwide deliver a full range of infrastructure-related services, including award-winning planning, design, program management and construction management. For more information, visit http://www.hntb.com.