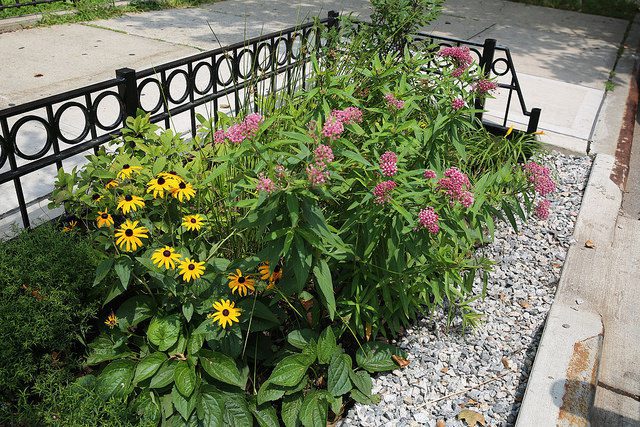 April 16, 2015—Department of Environmental Protection (DEP) Commissioner Emily Lloyd and Department of Design and Construction (DDC) Commissioner Dr. Feniosky Peña-Mora today announced that construction is set to begin this month on approximately 90 specially designed curbside gardens in the neighborhoods of Boerum Hill, Carroll Gardens, Gowanus, Park Slope and Prospect Heights. When construction is completed later this summer, the curbside gardens, also called bioswales, will have the capacity to collect and absorb nearly 170,000 gallons of stormwater when it rains. It is estimated that the bioswales will capture more than 8 million gallons of stormwater each year, thereby reducing sewer overflows into the Gowanus Canal and improving the health of the waterway. To view a video of a bioswale collecting stormwater go here. The bioswales will also green the neighborhoods and help clean the air.

“With the arrival of spring it’s the perfect time to plant new bioswales to help manage the precipitation that falls on Brooklyn streets, roof tops, parking lots and sidewalks,” said DEP Commissioner Emily Lloyd. “Investing in green infrastructure is a cost-effective way to improve the health of the Gowanus Canal, green neighborhood streets and clean the air we all breathe.”

“Bioswales provide much-needed greenery for our urban neighborhoods while capturing stormwater to reduce overflows into our City’s rivers,” said Dr. Feniosky Peña-Mora, DDC Commissioner. “Starting this year, DDC will be installing more than 500 bioswales to support Mayor de Blasio’s efforts to make our infrastructure more environmentally sustainable and resilient.  As always, during our construction efforts we are committed to be good neighbors to the residents and businesses surrounding our project sites, by keeping them informed as to the project status and minimizing the disruptions our construction creates. I would like to thank the Mayor and our partners at DEP for making this forward-looking investment in the health and safety of our neighborhoods and waterways.”

“I am thrilled that DEP will soon begin construction of bioswales in the Gowanus watershed,” said City Council Member Brad Lander. “This is a crucial step to address the problem of combined sewer overflows, which remain a very serious problem for the Canal. And this infrastructure is an example of the kind of creativity that will be required to help make the Gowanus neighborhood a model for sustainability in a low-lying, once-polluted industrial area, on a warming planet.”

“Gowanus and surrounding neighborhoods are going green with new bioswales being introduced by the Department of Environmental Protection,” said City Council Member Stephen Levin. “I look forward to the construction of these bioswales and for our communities to benefit by becoming greener and healthier.”

“With Earth Day only one week away, it’s fitting that the City’s Department of Environmental Protection and Department of Design and Construction have once again combined their resources to improve our communities,” said Council Member Laurie A. Cumbo. “Through the use of bioswales, we can continue to sustain our environment and improve the quality of life for all New Yorkers.”

Bioswales are built in city sidewalks and do not result in the loss of any parking spaces. They resemble standard street tree pits, except that they vary in size, have curb cuts that allow stormwater to enter and overflow if it becomes saturated, and have been designed in a way that will allow them to manage between 1,100 and 2,200 gallons each during a storm. DEP has developedstandard designs, specifications and procedures for building green infrastructure in the streets and sidewalks of New York City. In partnership with the Departments of Transportation and Parks and Recreation, DEP conducts an extensive site selection process that includes geotechnical investigations and surveys. During construction, the bioswales are excavated to a depth of five feet and are then backfilled with layers of stone and engineered soil. These layers contain void spaces that store the stormwater and promote infiltration. The addition of hardy plants further encourages infiltration through root growth and increases the capacity of the bioswale through evapotranspiration. The bioswales are designed so that all the stormwater is absorbed in less than 48 hours and dedicated maintenance crews ensure that they are functioning properly, including removing any trash that may have accumulated and pruning the trees and plants. The crews are active seven days a week, visit each bioswale approximately once a week and additional crews will continue to be added as the program expands. To date, approximately 300 bioswales have been built throughout New York City with 1,300 currently under construction and thousands more planned for the next several years. In addition to the bioswales, two stormwater green streets will be built to utilize underused roadway to absorb stormwater.

DEP primarily builds bioswales in neighborhoods that are serviced by combined sewers. Within these neighborhoods, locations for the bioswales are initially chosen by DEP engineers who, armed with maps of the local sewer systems, walk the streets and identify sidewalk locations that are upstream of a catch basin and have the room necessary to accommodate a bioswale. This initial group of potential locations is then reviewed by the Department of Transportation to ensure that they meet all necessary pedestrian and vehicle clearance requirements and the Department of Parks and Recreation who provides guidance on trees and planting plans. Soil samples are then taken from the approved locations to ensure they can absorb the necessary amount of stormwater. The extensive survey and testing ensures that each site functions as designed. The locations that meet all these requirements will then be approved for construction.

DEP has conducted extensive outreach in the Gowanus Canal watershed area, including meeting with City Council Members, Community Boards 2, 6 and 8, Brooklyn’s Borough Service Cabinet and District Service Cabinet, the Gowanus Canal Conservancy, the Park Slope Civic Council, the Downtown Brooklyn Partnership, and numerous other neighborhood and environmental organizations. These meetings help to inform communities about the purpose of green infrastructure and the benefits it will bring to their neighborhoods as well as plans for future construction. In addition, brochures with Frequently Asked Questions are distributed to the properties abutting the locations of future bioswales.

In addition to building green infrastructure on streets and sidewalks, DEP also partners with other agencies to add green infrastructure at schools, parks, and public housing. For example, DEP partnered with the Trust for Public Land, the School Construction Authority and the Department of Education on a “green” playground at P.S. 261 that manages nearly half a million gallons of stormwater annually in the Gowanus Watershed. DEP also administers a Grant Program for private property owners. DEP has committed over $13 million to fund 33 different projects, which was matched by $5.6 million in private funds. In the Gowanus watershed, DEP partnered with the New York Restoration Project to add green infrastructure to the Gil Hodges Community Garden. For more information on the program or to apply for a grant visit the DEP website.

New York City, like other older urban communities, is largely serviced by a combined sewer system where stormwater that falls on roofs, streets, and sidewalks, and wastewater from homes and businesses are carried through a single sewer line to treatment plants. The city’s 14 treatment plants can manage and treat to federal Clean Water Act standards all the wastewater created in New York City on a dry weather day, or about 1.3 billion gallons on average. On a rainy day they have the capacity to clean more than twice the dry weather flows. However, during intense precipitation events, the stormwater that falls on the city’s impervious surfaces exceeds that capacity and overflows can be discharged into local waterways. If the overflows were not discharged, the City’s treatment plants would be flooded and severely damaged and wastewater could backup into homes and businesses.

Over the last decade the City has invested more than $10 billion in upgrades to wastewater treatment plants and related efforts to reduce combined sewer overflows and testing confirms that the water in New York Harbor is cleaner today than it has been in more than a century. However, overflows remain the city’s primary harbor water quality challenge. As traditional “grey” infrastructure upgrades became increasingly expensive, the NYC Green Infrastructure Plan was launched. An alternative approach to improving harbor water quality, it combines traditional infrastructure upgrades and the integration of green infrastructure to capture and retain stormwater runoff before it can ever enter the sewer system and contribute to overflows. New York City and New York State have entered into a Modified Consent Order which formalized the City’s inclusion of green infrastructure as an important component of its plan to reduce combined sewer overflows into local waterways and improve the ecological health and cleanliness of New York City harbor water.

DEP manages New York City’s water supply, providing more than one billion gallons of water each day to more than nine million residents, including eight million in New York City. The water is delivered from a watershed that extends more than 125 miles from the city, comprising 19 reservoirs and three controlled lakes. Approximately 7,000 miles of water mains, tunnels and aqueducts bring water to homes and businesses throughout the five boroughs, and 7,500 miles of sewer lines and 96 pump stations take wastewater to 14 in-city treatment plants. DEP has nearly 6,000 employees, including almost 1,000 in the upstate watershed. In addition, DEP has a robust capital program, with nearly $14 billion in investments planned over the next 10 years that will create up to 3,000 construction-related jobs per year. For more information, visit nyc.gov/dep, like us on Facebook, or follow us on Twitter.

DDC is the City’s primary capital construction project manager.  DDC provides communities with new or renovated public buildings, such as firehouses, libraries, police precincts, courthouses, and senior centers.  What’s more, DDC delivers new or upgraded roadways, sewers, water mains, and other infrastructure projects in communities throughout the city. Over the last decade, DDC has completed more than 750 miles of new roadways and sidewalks, 700 miles of water mains, and 500 miles of storm and sanitary sewers—all of which are essential for a vibrant city like New York. To manage this $9 billion portfolio, DDC partners with other City agencies and with emerging and world-renowned architects and consultants, whose experience and creativity bring efficient, innovative, and environmentally-conscious design and construction strategies to City projects. For more information, please visit nyc.gov/DDC.