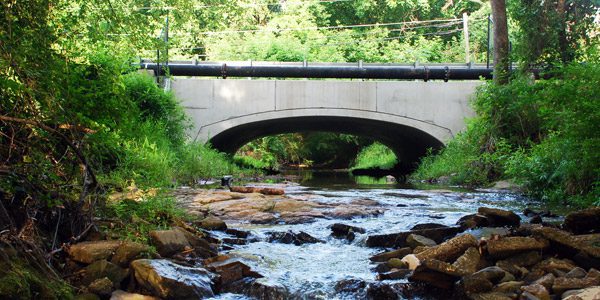 Griffin, Georgia—The City of Griffin, Georgia needed a bridge replaced over the summer while school was not in session. The existing bridge was old and narrow, and the foundation was becoming undermined from excessive scouring. The two intermediate supports for the bridge created three “barrels” similar to that of a box culvert. The City had to clean out the entrance to the bridge after every significant rain event due to the accumulation of debris at the upstream entrance.

Maple Drive, where the bridge is located, is the main road to residential areas south of the City. The school system needed to have the road closed only during the summer due to the substantial length of a detour for the numerous school busses that utilize Maple Drive during the school year.

For the reasons stated above, the City required that the new bridge be designed, fabricated and installed within a tight time frame. Since the lead time for a conventional bridge was outside of the allowable time for completion, a 31’ x 7′-3” CON/SPAN® O-Series® Bridge System, 42’ in length, was selected as the best solution for its ability to meet the deadline in a cost effective manner.

The City was able to purchase the structure which further streamlined the construction schedule and cost savings. Once the foundations were completed, the precast bridge components were installed in just one day. Overall, the entire project was completed in only six weeks. Since the project was completed one week ahead of schedule, school bus routes were not affected at the beginning of the new school year.