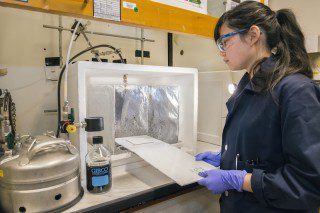 April 15, 2015—Cool roofs can help keep buildings cool, thus lowering the building’s energy use, while also mitigating the urban heat island effect by reflecting sunlight away from buildings and cities. But as cool roofs age and get soiled, how much of their reflectance do they lose?

A collaboration led by scientists at Lawrence Berkeley National Laboratory (Berkeley Lab) has established a method to simulate soiling and weathering processes in the lab, reproducing in only a few days the solar reflectance of roofing products naturally aged for three years. Now this protocol has been approved by ASTM International, a widely referenced standards body, as a standard practice for the industry, and published as ASTM D7897-15.

“What we’ve created is essentially a cool roof time machine,” said Ronnen Levinson of Berkeley Lab’s Heat Island Group. “By reducing product rating time to three days from three years, our new ASTM standard practice will speed the introduction of high-performance cool roofs not only in the United States, but around the world.”

Roof reflectance is rated when new, and after three years of outdoor exposure. Because the ASTM standard has been endorsed by the Cool Roof Rating Council (CRRC), it is in turn accepted as part of California’s building code, specifically California’s Title 24 Building Energy Efficiency Standards. Research is underway to adapt the method for use in China, India, and Europe.

The laboratory practice involves putting a piece of the roof material in a commercial weathering apparatus, which exposes the material to cycles of heat, moisture, and ultraviolet light, for one day. This “conditions” the material before soiling. Then a soiling apparatus developed at Berkeley Lab sprays a calibrated aqueous soiling mixture of dust, soot, particulate organic matter, and salts for about 10 seconds. After it dries, it goes back in the weathering apparatus for one more day, to simulate the cleaning effects of dew and rain.

The researchers devised different soiling mixtures to mimic site-specific features of three environments: a hot and humid climate (Miami, Florida); a hot and dry climate (Phoenix, Arizona); and a polluted atmosphere in a temperate climate (Cleveland, Ohio). A fourth soiling mixture was devised to replicate the aged solar reflectance averaged over all three sites, which is the aged value reported by the CRRC on rated product labels.

A team of Berkeley Lab scientists and research associates, including Mohamad Sleiman, Hugo Destaillats, Sharon Chen, Thomas Kirchstetter, Haley Gilbert, Paul Berdahl, and Levinson, worked with Hashem Akbari at Concordia University, the CRRC, and more than 40 industrial partners to develop the protocol. The process was described in a paper in the journal Solar Energy Materials and Solar Cellslast year.

Berkeley Lab and the CRRC will offer one-day courses on this practice on April 21 and 22. Representatives of 10 manufacturers, four independent testing laboratories, and several research institutions in Mexico and South Africa will come to Berkeley Lab to attend these fully subscribed workshops. Additional courses will be offered this summer to train researchers from China and India.

Funding for this research was provided by the Department of Energy, Energy Efficiency and Renewable Energy, Building Technologies Office.

Lawrence Berkeley National Laboratory addresses the world’s most urgent scientific challenges by advancing sustainable energy, protecting human health, creating new materials, and revealing the origin and fate of the universe. Founded in 1931, Berkeley Lab’s scientific expertise has been recognized with 13 Nobel prizes. The University of California manages Berkeley Lab for the U.S. Department of Energy’s Office of Science. For more, visit www.lbl.gov.

DOE’s Office of Science is the single largest supporter of basic research in the physical sciences in the United States, and is working to address some of the most pressing challenges of our time. For more information, please visit science.energy.gov.