/ Feature / The Beauty Beneath: Notable Water and Sewer Networks Recognized

The Beauty Beneath: Notable Water and Sewer Networks Recognized 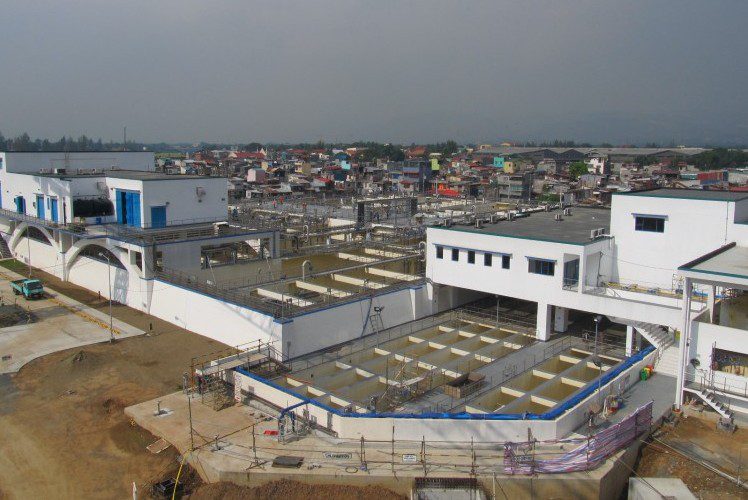 The Be Inspired Awards, awarded annually at Bentley Systems’ Year in Infrastructure Conference, are something like the Academy Awards of the infrastructure world—they recognize and celebrate design and construction achievements that often go unrecognized by the very citizens whose lives are being improved by applied practical genius. As Norman Maclean said, in the context of correctly loading pack mules, “To all those who work come moments of beauty unseen by the rest of the world.”

The Year in Infrastructure 2014 Conference, held in London, was no exception. Innovation in Water, Wastewater, and Stormwater Network Modeling and Analysis is one of many categories that would seem obscure or even dull to most, but in fact the three award finalists were all exciting projects that are having a major impact on some of the fastest growing and most densely populated regions of the world. Literally millions, or tens of millions, will see improvements in their daily lives as a result of innovative water and sewer network projects completed in Delhi, India; São Paulo, Brazil; and Marikina City, Philippines.

Marikina City, the ‘Shoe Capital of the Philippines’ and representing about 450,000 of Metro Manila’s population of 12 million, is a wealthy, highly urbanized region on the island of Luzon. The sewer system is well-developed, but still discharges untreated water into the San Juan, Pasig, and Marikina rivers, a situation that the Manila Water Company is eager to correct with an ambitious $90 million system expansion. “The ultimate goal of the project is to treat all waste waters discharging into the three major river systems,” said Hydraulic Engineer Christian Henry Lacson. “… in order to reduce the pollution loading discharge to these bodies of water and ultimately making them fit for swimming and for activities that require contact with water.” 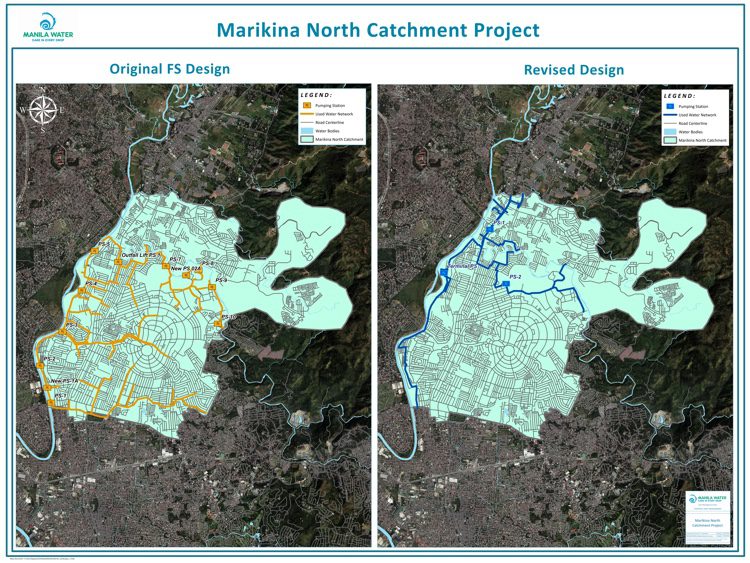 “SewerGEMS made it possible to shift from one scenario to another with relative ease given the complexity of the project and the number of factors that affect the planning and design of the project,” Lacson explains. “Through our effective use of the SewerGEMS software, we were able to cut down the number of pump stations from the originally proposed 12 pumps to three pumps in the revised model. This reduction in the total number of pumps and lift stations significantly reduced the environmental, financial, technical, and social risks involved in constructing these facilities. Ultimately, because of these risks being mitigated, the Company was able to save on capital expenditures and operating expenses by establishing the best network route in terms of cost and risk.”

Savings and risk mitigation came from several sources. Reducing the amount of land needed for pump stations, for example, also sharply reduced community resistance and the difficulty of obtaining permits. “The Company can face strong opposition from the public due to possible traffic congestion and ‘not-in-my-backyard’ mentality,” Lacson explains. “Political risks include the difficulty encountered in acquiring government permits because of the inconvenience that could arise during the implementation of the project. And permitting becomes exceptionally difficult if the government cannot show substantial gain from the project. The flexibility in sewer network modeling provided by SewerGEMS made it possible to lessen impacts and more clearly demonstrate project value.”

Some of this value derived from Manila’s tight environmental restrictions—by lessening the amount of trees affected by the project, Manila Water Company greatly eased the permitting process for the project. By comparing routes using factors and constraints derived from the GIS, such as utility routes, environmentally protected areas, trees, and zoning, the Company was also able to reduce the number of deep excavations required, and the number of excavations near residential and environmentally sensitive areas.

Flooding is also a critical issue. “Flooding can be a great problem with poorly planned sewer systems,” Lacson explains. “However, through adequate and appropriate design, aided by hydraulic models, flooding risks can be addressed. Financial risks include the possibility of it being disallowed by the regulators if the facility is later found not complying with the existing environmental standards. Through the aid of simulated models, the risk of disallowed projects because of not hitting the committed targets coverage can be avoided.”

Project staging and timing has also been facilitated by SewerGEMS. Manila Water Company used the model and queries to quickly compare the effect of varying annual flow projections on several implementation scenarios. “This allowed us to study the options deeper and come up with a most prudent staging of the implementation of the project.” says Lacson. “And safety is obviously important too. Here, having a hydraulic model is clearly an advantage. By loading the flow projections in different years we can anticipate the probable sections that will experience flooding. We identify these areas then we design a mitigation plan—effective plans can address the potential hazards due to overflows in the network and the treatment plant itself. Risk mitigation will be our plan to enhance safety measures and this is made easier due to the availability of the hydraulic model.”

The Marikina North Project, which was the 2014 winner of the Be Inspired Awards in the Innovation in Water, Wastewater, and Stormwater Network Modeling and Analysis category, is under construction now and is already considered highly successful. Lacson says that SewerGEMS is a major factor in that success. “Through our Company’s effective use of SewerGEMS, we were able to come up with the best possible options for this project, which enabled us to manage and reduce the impact of the environmental, social, technical, financial, and political risks. ‘Our work in planning is a headache,’ said one of my colleagues. I replied, ‘Imagine it without SewerGEMS!’”

The National Capital Territory of Delhi is India’s capital district and the site of New Delhi, India’s capital and its second most populous metro area, with a population of about 25 million. But as early as 1971, the population was only four million, so obviously the region has grown rapidly, and in a way that has more or less outstripped planning efforts and infrastructure construction.

Presently, only about 50 percent of NCT Delhi has access to a centralized sewerage system. In response to this challenge, the Delhi Jal Board (water and sewer department) commissioned the international infrastructure firm AECOM to develop a holistic, integrated, and sustainable master plan with a design horizon of 2031 to ensure that comprehensive, technically and financially viable plans are in place for the implementation of sewerage and non-sewerage improvement projects that will improve the general sanitation conditions and also improve and enhance the water quality in Yamuna River (the Yamuna is the Ganges’ largest tributary and, like the Ganges, important religiously). 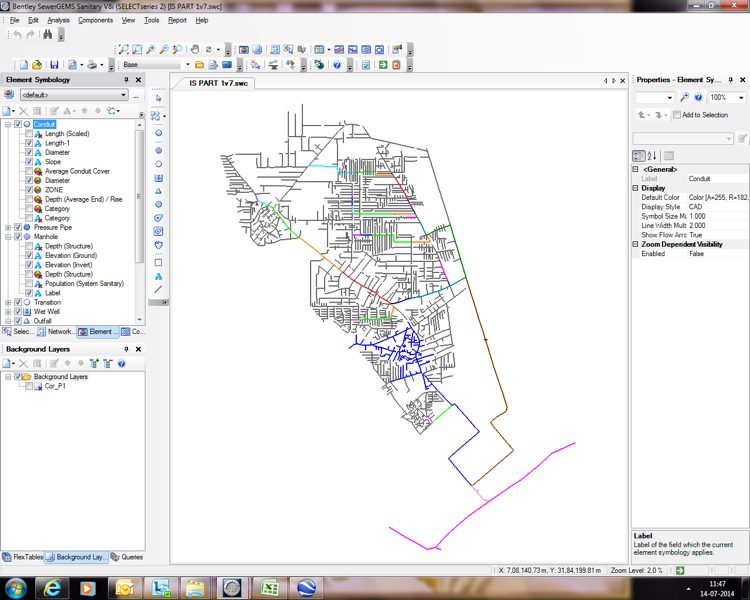 The project covers all of NCT Delhi, an area of 1,500 square kilometers, and is divided broadly into sewered and unsewered categories. For the sewered area, AECOM carried out performance audit of 30 existing sewage treatment plants at 17 locations, with design capacity of 512.4 million gallons per day, along with hydraulic modeling of all significant trunk sewers. The scope also includes flow-monitoring, wastewater sampling at strategic locations, and conditional assessment of 500 manholes. All of this work is intended to ‘dovetail’ the existing system into new projects in 2,200 unsewered districts, and also included topographic surveying of densely populated areas, and GIS integration. The model includes about 10,000 kilometers of existing sewer pipe.

Meaningful modeling at this scale, in ways that facilitate efficient, cost-effective network expansion, is a significant challenge. AECOM’s choice of modeling solution was Bentley Systems’ multi-platform SewerGEMS. AECOM India’s Associate Director Raman Kumar says, “SewerGEMS and associated Bentley technology was able to connect advanced and precise technology with the knowledge base we’ve built into our GIS and other tools in ways that will definitely uplift and rehabilitate poor sanitation conditions in NCT Delhi.”

For AECOM, SewerGEMS was a way to not only model a huge system, but to do it in ways that integrated well with the project’s planning and design goals, as well as facilitating operations. Kumar says, “SewerGEMS provided us with innovative ways to design and simulate a big network with an integrated approach. By using pre-defined queries extensively, integration with GIS, and automated load calculations in different scenarios, we were able to quickly compare alternatives and generate meaningful outcome simulations and network calculations. We saved months and were ultimately able to plan feasible improvement over a long time frame and generate drawings, profiles, and reports with improved precision.” AECOM estimates that use of SewerGEMS reduced person-months to a seventh of initial estimates, enabling completion of the model and master plan within six months.

This Sewerage Master Plan is urgently needed and will have a profound impact on NCT Delhi’s development. Notably, sanitary waste processing will be extended to millions, and pollution levels in the Yamuna River—which is the region’s major source of drinking water—will be sharply reduced.

São Paolo (the name honors Saint Paul of Tarsus) is the capital of Brazil and the country’s most populous city, and the center of the world’s seventh most populous metro area—more than 20 million people call São Paulo ‘home.’

The region’s largest water network, the Cantareira System, serves about 9 million Brazilians. Some of the system’s numbers are eye popping; 33 cubic meters of treated water distributed every second, 550 kilometers of pipelines with diameters ranging from 600 millimeters to 2,500 millimeters, and water is transported between elevations of 700 and 1,000 meters above sea level.

The Cantareira water system has been in operation for 40 years, and is currently extraordinarily stressed—a January 2015 Guardian article reported that, “Halfway through the rainy season, the key reservoir for the Southern Hemisphere’s largest city holds just 6 percent of its capacity, and experts recently warned that São Paulo’s authorities must take urgent steps to prevent the worst drought in more than 80 years from drying it out… The system of reservoirs and rivers that provide water to millions in the Brazilian metropolis have received less rainfall than hoped during the first weeks of the wet season, raising fears they will not be replenished as hoped. Rainfall during the first two weeks of January totaled just 7.1 centimeters, well below the historic average for the month of 27.1centimeters.”

To run the Cantareira more efficiently, SABESP, the state-owned management company that operates the system, used Bentley Systems’ WaterGEMS to build a comprehensive hydraulic operation model of the entire system. SABESP Engineer André Luiz de Freitas said, “The WaterGEMS model has helped us to manage risk by diagnosing excessive speeds and deficient flow rates on future consumption projections. This diagnosis led to the introduction of solutions that benefit society, ensuring operational safety and treated water to the current and future population. Also, this project achieved real operational savings by reducing electricity consumption, increasing asset lifespans, reducing the time and labor devoted to operation, and by giving us the flexibility to increase storage capacity and decrease redundant use of water mains. The expected return on investment is 20 million dollars per year.” 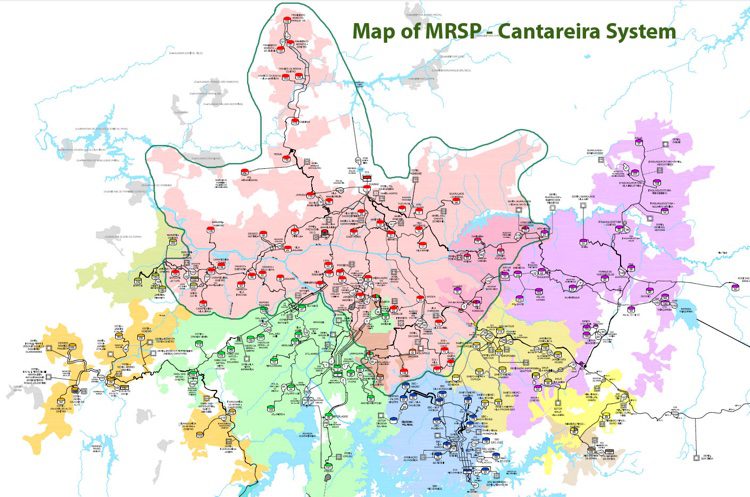 The aim of the modeling project was not primarily to facilitate design of new infrastructure, but rather to make better use of existing infrastructure. “Now that we understand the system better, we can use the hydraulic model to analyze solution proposals for chronic challenges,” de Freitas explained. “This enables us to offer the best water supply conditions with minimal impact on the environment and, consequently, reduced discomfort and higher quality for the population we serve.”

One concrete result of the modeling initiative is already being implemented. SABESP was able to analyze pipeline loads and carrying capacity, compared to projected growth, which allowed cost-effective planning of new pipeline implementation schedules and investment.

de Freitas speaks highly of Bentley’s involvement; “Bentley’s interest in supporting the client and discussing suggestions for improvements resulted in a more rapid and complete solution, greatly reducing the time it took to get project-related answers.”