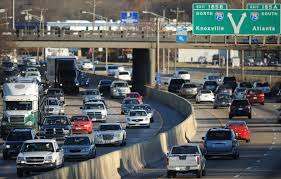 The 2016 building program consists of only two new projects. The rest of the projects listed are projects from the 2015 building program that were delayed due to continued uncertainty of the future of the Federal Highway Trust Fund. In addition to the 2016 budgeted program, partial plans for 2017 and 2018 are included. The 2nd and 3rd year of the program are unchanged from last year’s 2nd and 3rd years.

The current federal transportation funding bill expires May 31, 2015. If a new bill is not passed by Congress, TDOT could lose funding for the remaining four months of the current fiscal year. This is the same situation that forced the department to delay dozens of projects over the last year.

“TDOT is continuing its long held ‘pay-as-you-go’ philosophy, and this three-year plan reflects our state’s ongoing commitment to remain debt free on our roads,” Haslam said. “The department’s conservative approach also ensures that projects already under construction won’t be negatively impacted by decisions out of Washington.”

The two projects added to the 2016 building program include the paving to complete the construction of SR 66 in Hamblen County and funds for Right of Way acquisition for a section of SR 13 in Montgomery County for improvements related to the future Hankook Tire Company manufacturing facility.  TDOT will invest more than $680 million in resurfacing and bridge repair and replacement projects over the next three years.

“At this critical juncture in federal transportation funding, TDOT’s priority must be maintaining our existing pavement and bridges rather than new projects,” Schroer said. “We must also prepare for the reality of possible continued delays to the projects in our building program.”

The program includes dedicated funding for 15 transportation programs including Rockfall Mitigation, Spot Safety Improvement, the statewide HELP Program and the second year of the State Route Multimodal Access Initiative, which enhances connections between modes, such as sidewalks and park-and-ride facilities at key locations along state routes. The program also provides funding for transit agencies, Metropolitan and Rural Planning Organizations and private non-profit organizations in all 95 counties in Tennessee.

Please see the attached list of highlighted projects in each of TDOT’s four regions. To view a complete list of projects and programs funded through the 2016-2018 three-year multimodal program visit http://www.tdot.state.tn.us/documents/ThreeYearProgram-TDOT-2016-2018.pdf.    For more information about transportation funding, please visit http://www.tdot.state.tn.us/funding.shtml.