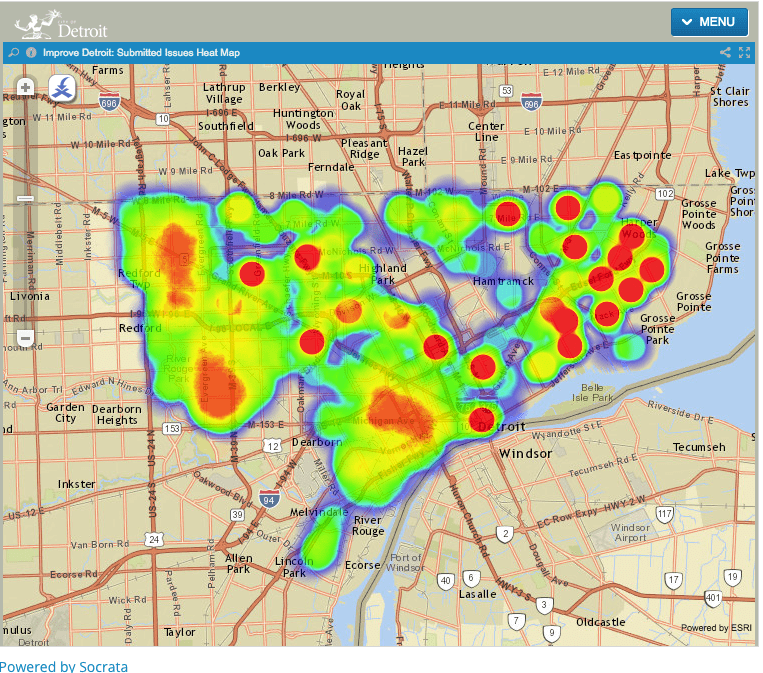 From potholes, to water main breaks to illegal dumping, residents can use their smart phone to get problems fixed.

Detroiters now have the ability to report a pothole, missing traffic sign or a dozen other issues to City Hall from their smartphone.

As part of his ongoing effort to make city government more efficient and accessible to its residents, Detroit Mayor Mike Duggan officially launched the Improve Detroit mobile app.  The app is available for download on Google Play and the Apple Store.

“The new Improve Detroit app is like having City Hall on your phone,” said Mayor Duggan. “From wherever they are, this simple tool will allow residents to report an urgent problem we may not know about.  They will be able to report the type of problem, the exact location and even submit a photo.”

Once the report has been submitted, Improve Detroit will route the issue to the appropriate department and generate a work order that can be tracked by our departments and the general public.   The app sends automatic notifications allowing the person submitting the complaint to track the issue and when it’s resolved, the Mayor said.

In this first phase of the Improve Detroit roll out, residents are able to select from more than a dozen service issues, including:

Detroit residents can also pay their water bill through the app.  More city services will be added to Improve Detroit in the coming weeks and months.

Reporting an issue made easy.

The Improve Detroit app walks users through the simple process of reporting a problem.

1. Select your issue. From within the app, a resident just has to click “report” and then select from the list of issues that appear.

2. Provide a description. Once an issue has been selected, users will be able to enter a description and answer questions specific to the issue they are reporting.

3. Enter the location. The app also asks users to enter the address or cross streets so repair crews know exactly where to go.

As an added feature, Improve Detroit lets users upload a photo or video to give City employees a better perspective of the reported issue.

For those without smartphone access, reports can be made online as well.  Residents can go to Report an Issue and follow the same steps as you would on the app.

If you set up an account, you’ll receive emails updating you on the city’s progress and notification that the issue has been resolved.

Citizens without smartphones or internet access can still report concerns to the Office of the Ombudsman by calling (313) 224-6000.

All issues reported through Improve Detroit are available for the public to see. Through the app and on the website, users can hit Issues and see a listing of what has been reported in their neighborhood and throughout the city. Improve Detroit shows users when an issue was reported, if city workers have acknowledged it and when the issue was closed.

“From an accountability standpoint, it’s important for the public to know what issues have been reported and if the city is following through,” the Mayor said.  “This is a transparent process from start to finish.”

For a full listing of smartphone apps available from the City of Detroit, please visit http://www.detroitmi.gov/How-Do-I/MobileApps.