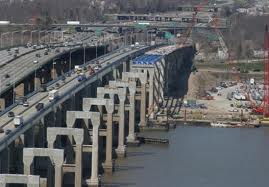 Trenton, April 2, 2015—The New Jersey Department of Transportation (NJDOT) has announced a proposed capital program for Fiscal Year 2016 that supports $2.8 billion in NJDOT and other agency investments and another $2.1 billion in NJ TRANSIT improvements, for a total program of $4.9 billion.

The proposed capital budget focuses on safety, mobility, and maintaining assets in a state of good repair. It supports the largest project in NJDOT history – the Pulaski Skyway rehabilitation – and maintains Local Aid grants to counties and municipalities at robust levels to help ease burdens on local property taxpayers.

“This proposed program will enable NJDOT and NJ TRANSIT to move projects forward that improve our state’s aging infrastructure and provide funding for counties and municipalities to address local transportation needs for one more year,” NJDOT Commissioner Jamie Fox said. “However, our infrastructure is in disrepair and our Transportation Trust Fund is running out of money. We must identify a reliable, dedicated revenue source for the Transportation Trust Fund.”

“This program continues our focus on improving critical infrastructure needs including federal money to help strengthen our system,” NJ TRANSIT Executive Director Veronique “Ronnie” Hakim said. “The budget also allows us to continue to modernize our rail and bus fleet while maintaining safe and reliable delivery of services to our customers.”

The $4.9 billion program includes $1.6 billion in state funds, the same as last year, and $2.3 billion in federal funds—an $800 million increase, which supports a $1.9 billion NJDOT capital program and a $2.1 billion NJ TRANSIT program.

Another $950 million in Port Authority of New York & New Jersey projects—a $335 million increase—which is included for federal reporting purposes, raises the total proposed FY 16 capital program value to $4.9 billion, but these projects are not administered by NJDOT or NJ TRANSIT.

NJDOT
Investment in bridges and roads have been a hallmark of the Christie Administration. The NJDOT program proposes $333 million for roadway assets, most of which goes toward resurfacing, rehabilitation, and preservation projects. It also proposes $655 million for state and local bridge assets.

Investments in bridge rehabilitation or replacement projects have enabled the Department to reduce the number of NJDOT-owned structurally deficient bridges from 330 in 2010 to 289 now, or 11 percent of the 2,586 bridges owned or maintained by NJDOT.

Local Systems Support amounts to $441 million. NJDOT administers $389 million of that total, which consists of federal and state resources.  Four key grant programs, all funded with state resources, will distribute $190 million in FY 15. They are Municipal Aid and County Aid ($78.75 million each), Local Bridges Future Needs ($25 million to counties for bridge projects) and $7.5 million for Local Aid Infrastructure Fund grants.

Programs that promote safety will receive $100 million in funding in FY 16. These funds support projects such as median crossover protection to prevent head-on collisions and safety improvements along high-risk rural roads. Some of the funding is dedicated to local governments for their safety projects.

Highlights of the program include continued replacement of transit buses, as well as ongoing track replacement, bridge and tunnel inspections and improvement, and rail station and bus terminal improvements. The program also allocates nearly $900 million in federal funds for recovery and resiliency programs associated with Superstorm Sandy.