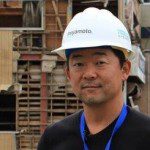 Kit Miyamoto, Ph.D., S.E., is the CEO and a structural engineer for Miyamoto International, Global Risk Miyamoto and a nonprofit organization, Miyamoto Global Disaster Relief. He earned his bachelor’s degrees at the University of California, Chico, a master’s degree at the University of California, Sacramento, and a Ph.D. from the Tokyo Institute of Technology. He serves as an expert consultant to the World Bank on seismic-risk mitigation projects and is an American Society of Civil Engineers (ASCE) Fellow who has served on many code-writing organizations, including the ASCE 7 Seismic Task Committee.

In 2011, Miyamoto worked with the government of Haiti, the United Nations, and various non-governmental organizations to conduct assessments on more than 400,000 earthquake-damaged structures and implement strategies for the reconstruction of Port-au-Prince. His firm has completed more than 14,000 projects worldwide in areas of high-performance earthquake engineering, disaster mitigation, disaster response and reconstruction. He has received the National Council of Structural Engineers Association’s Excellence in Structural Engineering Award, and currently serves as a California Seismic Safety Commissioner.

Miyamoto, and his global colleagues, apply the latest seismic safety research into practice on an everyday basis. The firm has strong ties to the University of California, Berkeley, and the Tokyo Institute of Technology in Japan.

In addition to helping property owners mitigate the risk on individual buildings, they also are involved in large-scale assessments and policy consulting. For example, they conducted a seismic-awareness and prioritization strategy for schools in Manila, Philippines, using a probabilistic risk assessment from realistic seismic hazards in the city’s micro zones as well as understanding the fragility function of the different building structures. They were able to model the fatality rate for different scenarios and prioritize a plan focused on how much they could reduce fatality risk based on money spent.

Miyamoto grew up in Tojo, Japan, a place that shakes almost weekly. Studying structural engineering in California and Japan, earthquake engineering was part of the curriculum and came naturally.

“Practicing in California and Japan, we get a lot of benefit from advancing technology and improvements in the building code, and the quality of construction is probably the best in the world,” says Miyamoto. “But there are so many parts of the world that are exposed to earthquake hazards, where the understanding of engineering and construction practices aren’t as available.”

As structural engineers, we have a responsibility to prevent these disasters.

Miyamoto works to combat the expense of seismic strengthening that often results in building owners doing nothing. His application of analytical tools to apply high-tech devices such as viscous dampers and buckling-restrained braces address a building’s major deficiencies in a cost-effective manner.

“When I began practicing in 1990, it took us a day of computation to do each simulation, and you can do that same simulation today in less than one second,” notes Miyamoto. “You can do more-intensive analysis much more quickly and can test a number of options. You can run the seismic model through buildings and see how the components behave and perform. Doing this analysis allows you to take a more surgical approach to building retrofits and repair.”

With exposure to different practices and risks worldwide, Miyamoto has a unique perspective on preparation vs. recovery. His experience in Haiti, where 50 percent of the building stock was lost and 250,000 people were killed, provoked an ongoing effort due to the amount of impact his firm can have there. He also appreciates the urgency to action that he finds missing elsewhere.

“If we can convince the public and private sector to adopt resiliency measures, improve building code and construction methods, and apply seismic strengthening prior to an earthquake, then we can save a lot of lives,” asserts Miyamoto. “The cost is also much less, because reconstruction is very expensive.”

He points out that California has not experienced a major urban disaster since the 1906 San Francisco earthquake, and that the state is overdue. We may all recall the Loma Prieta earthquake in the San Francisco area in 1989 that impacted the World Series, but that was a moderate earthquake. An earthquake ten times as powerful is expected. With that awareness, and his mandate as a California Seismic Safety Commissioner, he hopes to place more emphasis on the resiliency of quick recovery and reconstruction over simply seismic safety.

“People feel that if they have the right building code, then everything will be fine,” says Miyamoto. “Building code is the first step in 20 different steps, and people must understand that.”