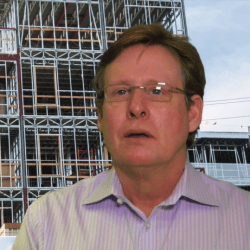 Prescient is a company that takes a technology-centric approach to standardize the building of cold-rolled steel, multi-unit construction. The company has model-based design software as well as an automated factory that churns out framing components for multi-unit projects. Informed Infrastructure (I2) Editor Matt Ball spoke with John Vanker, founder and CEO of Prescient, about the innovative approach they’re taking, some of the advantages they’re seeing with model-based design, and the need for more efficiency and integration across the AEC industry.

I2: You have developed a custom plugin for Autodesk Revit modeling software as well as setting up a factory to automate the building of your steel components. Was the software the first step or was it simultaneously developed at the same time as your automated manufacturing process?

Vanker: When we first began this venture, six years ago, we had the idea to simplify and standardize what we were doing so we would start to repeat the things we were good at over and over again. We wanted to combat a certain level of customization or “reinventing the wheel” for every project. We recognized that, as we started to develop a standardized approach, we would be able to apply a software algorithm to do automated modeling and design.

I2: How automated is the design process, are you specifying square footage and then getting a model?

Vanker: It’s much more versatile than that. The framing system is based on a limited library of components. The components are standardized and fit on a two-foot by two-foot design grid. Because they fit on the design grid, the modeling and design development can occur in an automated fashion.

The key for us is that we’ve recognized that the industry is fragmented, it lacks integration, and it’s inherently that way because there are a lot of stakeholders that have to come together in the design/build process in some fashion to complete a project. That’s monumentally difficult with poorly integrated stakeholders.

We work to get involved as a contributor early on in the process with our software platform. We provide an integration opportunity for everybody, because we can produce the very detailed replica of the building in virtual form very early in the design process. That model becomes the platform for other stakeholders to design around.

Typically, you hire an architect to do concept design, then move to schematic design, and then engage an engineer to design the engineering to work with the architecture, but that’s typically on a different software and not at the same level of detail until late in the design process. The early model helps integrate all the other stakeholders to get the bid tightened up early, you can do effective clash and conflict detection early, and you can develop a buildable set of plans if you start to get more of that information introduced early into the design.

I2: How does your software work, and how much of it is design vs. collaboration and project management?

Vanker: A portion of our software is a Revit plugin, and the architect uses that in laying out the building on our design grid. The building design and envelope—the building programming—happen in that early layout. Our software then designs the structure according to the design, so you’ve married those two things right from the start.

In typical drafting-centric design development, the architecture and engineering typically start at different times and go down different paths. Then those two disciplines spend the whole time during design and construction periods trying to match the design with the structural detail. That obviously leads to a lot of problems.

The model-centric approach, using the 3-D BIM model, gives us the ability to do virtual construction.

I2: I see that you’ve focused in on multi-unit buildings. Why does this building type fit well with your system?

Vanker: We can go from the low-density of single family all the way up to 12-story multi-unit buildings. Those buildings includes apartments, senior living, dormitories ( university and military) and hospitality (hotels). It works really well for those buildings, because it’s light-gauge steel and cold-rolled, so it won’t be applicable to large-span office buildings or retail where you typically have column spans of 24 feet or greater. We’re doing projects from 40,000 square feet all the way to several hundred square feet.

I2: As I understand it, you started out as a developer, and are you still a developer on these projects, or are you a solution provider?

Vanker: I have been in development for 25 years or so. That gave me a perspective on all the different aspects of what it takes to bring a project to close, from financing to design to construction and even to operation. I have a partner that I’ve worked with for 20 years. He and I had the idea as a result of recognizing how difficult this process is. We started this as an idea, and we did our first round of funding two and a half years ago, and we’re closing out another round of funding right now.

We’re not developers any more, we like to think of ourselves as a technology company. We have two sides of our personality, because we’re both a software company and a hardware company, because we do our own manufacturing. We created a software design tool for the AEC industry, and we manufacture a framing system for that same industry. Our customers are really all the stakeholders in a project, because they all benefit from a model-centric design approach.

We manufacture the structure of a building, and we ship it out to developers. We work with architects, engineers, developers, contractors, subcontractors, vendors and suppliers. We’re really involved in the whole process, given that we’re part of the initial design.

I2: You’re kind of turnkey on a large project, given your manufacturing capacity. Do you marry the off-the-shelf components onsite as well as facilitate the assembly of the structure?

Vanker: The way our process works, once the design is complete and locked down, our software takes the model and produces a bill of materials. This is a portion of our software that is outside of Revit. It takes the model and pushes it CAD to CAM (computer-aided design to computer-aided manufacturing) through our plant to make the panels, posts and trusses required to build the structure of the building. From the designer all the way to delivery onsite, it’s effectively integrated via our software.

We have what we call a certified installer program, where we use metal installers trained on our system. We don’t just send the components to the job site for anyone to install. We want to be partners with our installers to make sure the general contractor and owner have a good experience.

I2: With the factory to the job site portion of the construction process, how tightly do you tie to the schedule. Is it just-in-time delivery of components, and you’re delivering a truck specific to that day’s work?

We do that by limiting the number of components and standardizing things. We’re using barcodes to identify not only the components, but where the components go in the building. We like to say that our virtual model will match the built condition. It’s grid-based design as well as grid-based installation. We take the grid and effectively snap it onto the foundation, and then those components that we manufactured come up precisely on the grid in the same way they do in the virtual building.

Every component that we send to the job site effectively has it’s own unique address within the building. We’re developing software applications that will allow the installers, general contractor and owner to see and identify each piece as it’s going into place by scanning the barcodes.

There are many practical and important things that can be gained from that. We can see in real-time what is being installed and when. We can see production values and productivity levels. By measuring worth in place you can also measure the value of work in place. We can dial the percentage down to the individual component through these unique codes.

I think the industry is trying to move to a more automated process in general, and we’ve been able to secure some patents involving this technology.

I2: Is the model important for pre-sales of the structure all through maintenance? You have a really well-documented as-built with your system.

Vanker: Your as-built should be almost exact. It’s always an issue to see what’s behind the drywall and facade of the building. That’s important for the operation of the structure. The structure may last 100 years, and it’s going to go through maintenance cycles.

There are software and sensors out there where you can poke a laser through the ceiling tiles and map out the structure, MEP pipes and ducts in a building. Effectively, you’re mapping it after it exists. Through automated modeling, we’re mapping the structure before it exists.

The modeling is extremely expensive. Nobody would argue that an exact replica of the building would not be a very useful tool in doing the construction and planning, but it’s not practical. The developers won’t pay architects and engineers to spend hours and hours to create virtual models of their buildings. If you’re doing typical wood construction, the carpenter is going to interpret the model and build it a little differently.

With our system, because it’s grid-based, the building installs exactly as it was in the model. And the model is produced automatically from the architect’s design. I think we’ve created a very valuable product thanks to the automation.

I2: With your grid, I imagine that you tune the design to typical material sizes, such as a sheet size of drywall. Do you cut down on waste in your process?

Vanker: There are a lot of opportunities for waste in these projects, starting with the development of the design to the point where the plan has enough detail where you can build it. The plans, at best, are deficient in detail to have a really smooth build. Effectively, they never get enough detail to handle all the problems, and then you’re stuck with handling problems in the field.

If you know precisely where the structure will be in the building, you’ll be able to kit the materials into each unit. Prefabrication is becoming more popular, where the work done in a factory is controlled at a lower wage, and it’s much safer. If you’re looking at the average electrician on the job site, he’s spending 20 to 30 percent of his time stocking and moving materials around, and sorting material. He’s not spending the majority of his time installing the material. If each unit is kitted in or prefabricated, then the whole process is much more efficient.

The flooring material that we use is a cementitious decking. Because of the grid system, there’s almost no measuring when it’s installed.

I2: Where does this lead in terms of tuning your software and manufacturing process? Do you have global ambitions?

Vanker: We’re really excited that this is just the tip of the iceberg. What we’re doing is applicable to any property type, and any material and process. With our system, because it’s so predictable, we’re creating automated integration with building systems and components.

Knowing the hardware and materials and not guessing means that we don’t have to build in a lot of waste. We can be very efficient.

I2: Your approach to multi-unit construction has many intriguing elements from the set library of components to the welding robots. You have really tackled a new level of automation.

Vanker: I’d like to think that we’re going to change the industry. We haven’t revealed our whole bag of tricks yet. We’re doing really well with the framing system and the design/construction integration piece, and we have more yet to reveal.