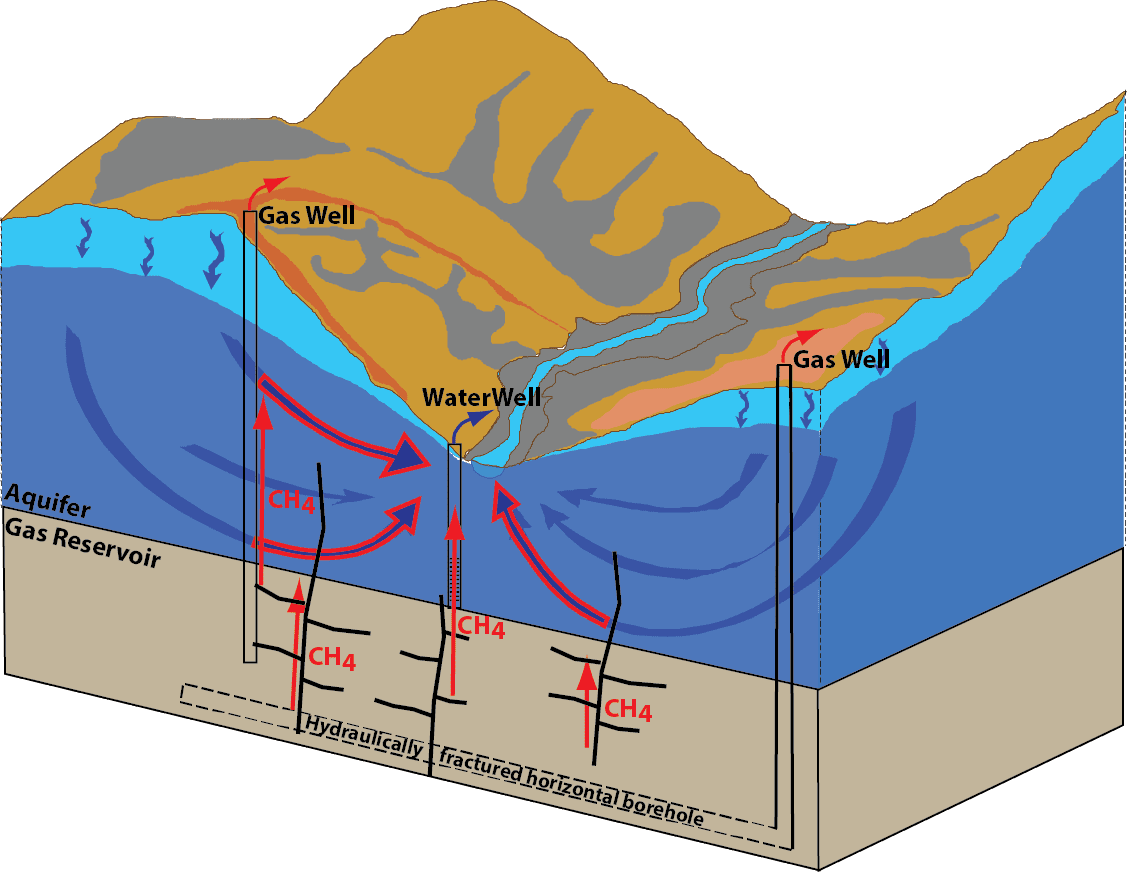 New Cumberland, Pa., April 2, 2015—Scientists from the U.S. Geological Survey, Pennsylvania State University and the University of Utah have used a new stream-based methane monitoring method to identify and quantify groundwater methane discharging to a stream in an area of shale-gas development.

Recently published in Environmental Science and Technology, the report describes how the technique was applied in northern Pennsylvania to first identify streams with elevated methane.  More detailed sampling of one such stream, Sugar Run, identified an inflow of about a half kilogram per day of methane to the stream. Hydrocarbon and noble-gas analyses indicate that the source is Middle Devonian shale gas, possibly from the Marcellus Formation. After sampling was completed, the scientists became aware that several domestic water wells in the watershed had been impacted by gas migration near a gas well with defective casing or cement.

While the presence of methane has been documented in some Pennsylvania homeowner wells, the extent of stray-gas contamination in shallow aquifers above the Marcellus is controversial because some wells contained measurable levels of methane prior to Marcellus development. Understanding of the extent of contamination is limited because of the lack of groundwater monitoring networks and publically available pre-development baseline data. Furthermore, no assessments have been made of the rate of either natural or human-induced causes of methane migration into aquifers. Such information is needed to understand how hydrocarbons enter freshwater resources and how often such migration is caused by shale-gas development. The stream methane monitoring method can help provide this information.

“I found it compelling that using this new method for a reconnaissance of just 15 streams in Pennsylvania, we discovered one instance of natural gas entering the stream, perhaps from a nearby leaking shale gas well,” said Susan Brantley, distinguished professor of geosciences and Director of the Earth and Environmental Systems Institute at Penn State.

Because no baseline stream hydrocarbon samples had had been collected prior to this stray-gas migration incident, the scientists were unable to definitively conclude that the methane in the stream was associated with stray-gas migration. But documentation of this gas-well methane release and the methane contamination of nearby domestic-supply wells, along with the lack of correlation with increased salinity in the stream, all suggest that the source of methane to the stream may be stray gas rather than natural migration of crustal fluids.

“Importantly, the finding shows that streams can be used as an alternative and complementary approach to the sampling of monitoring wells for identifying groundwater contamination associated with shale-gas development” according to Victor Heilweil, USGS Research Hydrologist.

Ideally, stream monitoring would begin prior to shale-gas development in order to establish baseline groundwater quality, before potential impacts from development. Because of the simplicity of this stream methane sampling method, the first step (identifying areas of methane-laden groundwater discharge) can be readily implemented over large regions. The technique initially only requires samples for methane analysis at kilometer-scale downstream intervals. Once streams with elevated methane have been identified, follow-up studies can determine if the methane is thermogenic (from shale gas) or from microbial processes. Stream transport modeling can then be used to quantify the amount of thermogenic methane discharging to the stream. In this manner, stream methane monitoring can be used to identify and quantify fluxes of thermogenic gas to groundwater and surface water.

“Watersheds funnel water and chemicals to streams, and by sampling at the end of the funnel, we can find leaks that would otherwise be like looking for a needle in a haystack,” said Kip Solomon, professor of geology and Director of the Noble Gas Laboratory at the University of Utah.

The USGS has been developing and testing the Stream Methane Monitoring method at several locations as a tool for evaluating the impacts of unconventional gas development on groundwater. For more information, visit the USGS Utah Water Science Center website.