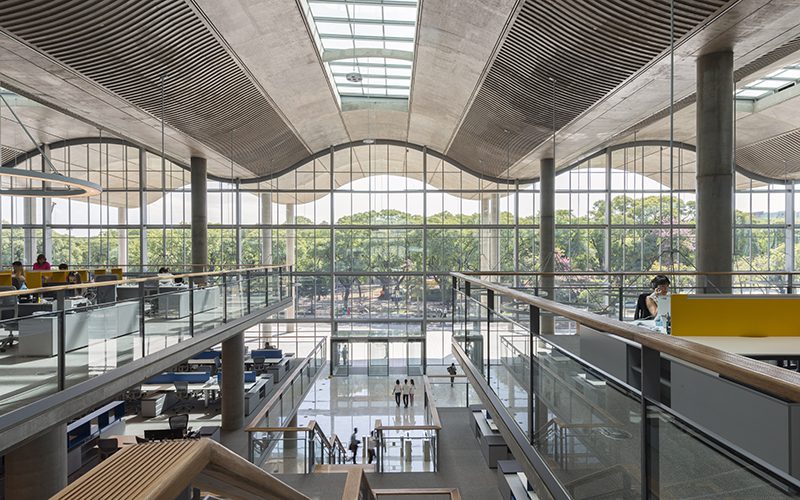 BUENOS AIRES, April 1, 2015—Lord Foster has attended opening celebrations in Buenos Aires today for the new Buenos Aires Ciudad Casa de Gobierno, a sustainable new city hall for the Mayor and 1,500 staff – and the practice’s first civic project in Argentina. Spanning an entire city block in Parque Patricios, the building is a catalyst for the regeneration of the neighbourhood and combines an environmentally efficient design with an innovative, highly flexible internal arrangement of terraced working floors.

Entry is through a soaring four-storey-high atrium. Full-height glass walls fill the space with natural light and create a visual connection with the adjacent park. The four tiers of workspaces step back to create a sequence of internal terraces. All floors are connected by top-lit circulation routes and punctuated by two large landscaped patios. The activity spaces are open, naturally lit and visible, ensuring good communication between departments and promoting a sense of community.

The generous floor plates are based on an eight-metre grid, which allows for a wide variety of layouts – the building was originally commissioned as the headquarters for Banco Ciudad, and the inherent flexibility of its design has enabled a seamless transition into government offices. Further facilities include a café and a 300-seat wood-panelled auditorium, which can be used for events by the local neighbourhood.

Externally, the building is characterised by its flowing roof canopy, which is supported by pillars and extends in a deep overhang to shade the entrance plaza and facades. Inside, the concrete barrel vaulted roof is textured and exposed. The use of industrial materials reinforces the formerly artisan character of Parque Patricios, while the thermal mass of the concrete soffits, combined with chilled beams, help to naturally regulate the temperature and keep the offices cool. It will be the first public building in Argentina to achieve the environmental award for sustainability of LEED Silver standard. Every aspect of the scheme was designed in response to the local climate, including the composition of each facade – the eastern and western elevations are shaded by a screen of louvres, which rise the full height of the building.

Lord Foster said:
“Sustainability relates very strongly to local resources and climate, and Buenos Aires Ciudad Casa de Gobierno is a great demonstration of how architecture can work with nature via passive environmental means to naturally reduce energy use. The roof extends like a canopy to provide shade, its flowing concrete structure is both symbolic as a civic building and functional in regulating temperatures. Shading louvres on the east and west protect the interior from direct glare, while courtyards allow sunlight into the heart of the building – in this way, its design is very much a response to place and climate. The project has played a vital role in regenerating this former industrial quarter of the city.”

David Summerfield, Head of Studio, Foster + Partners:
“This is an important milestone for the practice, and we are proud that our first civic work in Argentina is such an important government office for Buenos Aires. Its design is very much a response to the local context, socially and environmentally – our aim has been to create a highly flexible building, which celebrates the city’s wonderful climate and the unique park-side setting, and will make a positive addition to a revitalised neighbourhood.”