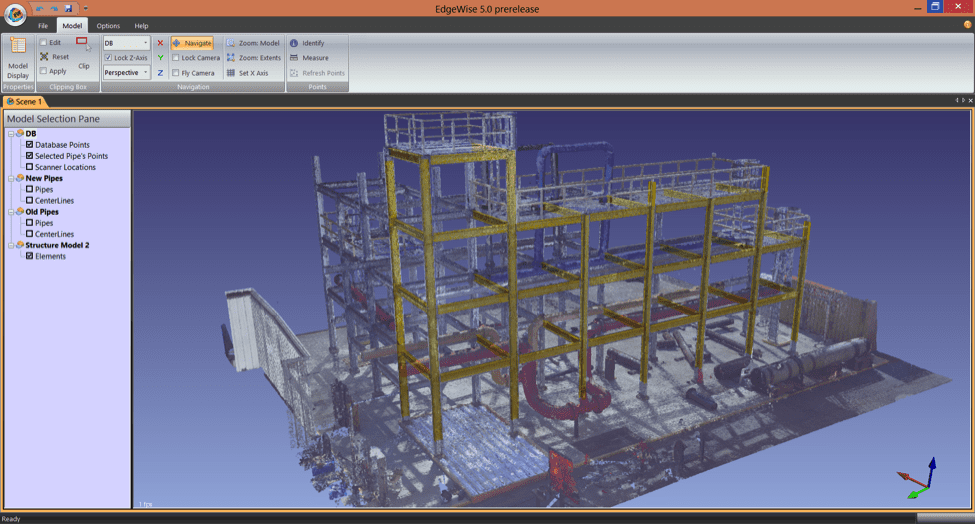 Houston, Texas, April 1, 2015 — ClearEdge3D today announced the release of EdgeWise 5.0, with numerous new features and enhancements that create the fastest field-to-finish modeling solution on the market. The software uses advanced feature extraction and object recognition technologies to automate the 3D modeling of as-built structural members, MEP, process plants and buildings from point clouds.  The software can dramatically reduce the man-hours required to create a finished BIM or facility model from laser scan data.

Rick Artiga with Meridian 3D used a beta version of the new software on a recent modeling project. “The new algorithms in EdgeWise 5.0 represent a clear leap forward in development,” he said. ”It’s a major step closer to the mythical one-click model.”  Another customer, Greg Hale with Hale TIP, voiced a similar assessment. “The new technology for auto-extraction of structural members looks phenomenal. It could change the way we all model as-built steel and concrete.”

The new features and enhancements in EdgeWise 5.0 are the outgrowth of a National Science Foundation grant the company received which funded the development of this radically new approach to automated feature extraction (AFE) and object recognition. The resulting technology is a significant advancement on the road to fully automated modeling. The new features in EdgeWise 5.0 include:

“The new algorithms in EdgeWise 5.0, especially the automated modeling algorithms for structure, are a major progression for the industry,” said Chris Scotton, ClearEdge3D’s President & CEO. “Our team of computational geometry experts has spent the last year rewriting and greatly improving our core technology. Users can now automatically extract gridded structure from a point cloud which will be a massive time-saver for anyone modeling as-built steel and concrete.”

Added Kevin Williams, ClearEdge3D’s founder and Chief Scientist, “We developed a whole new set of algorithms to dramatically improve our automated pipe extraction. The entire QA step of the EdgeWise workflow can be dramatically shortened due to the accuracy these new algorithms deliver.”

To see a live demo of EdgeWise 5.0 using your dataset, contact Janice Starrs at janice.starrs@clearedge3d.com or call 410-991-0582.  www.clearedge3d.com. To view a video of the new steel extraction click here: http://youtu.be/hf5lAS3Yhx0

ClearEdge3D was founded in 2007 by recognized experts and thought-leaders in the field of computer vision, Automated Feature Extraction, and LIDAR data analysis.  The company’s flagship product EdgeWise™ is used by top engineering firms worldwide to optimize their scan-to-model workflow. The company is privately-held and headquartered in Manassas, Virginia.