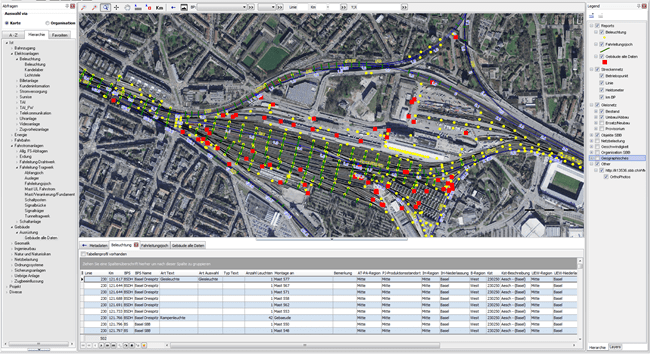 Swiss Federal Railways (SBB AG) has used the TatukGIS Developer Kernel for the development of its “DfA Reports” software application, which is used to manage a database of fixed railway asset installations across Switzerland. The DfA Reports application prepares and displays extensive infrastructure reports for the Swiss Federal Railways (SBB/CFF/FFS), the largest railway in Switzerland, and for the BLS (Bern–Lötschberg–Simplon) railway line, the second largest (by traffic) standard gage railway in Switzerland.

Using DfA Reports, approximately 800 individual infrastructure objects, ranging from “Tunnels” to “Power Sockets”, can be displayed, reported on, and analyzed. Results of multiple report queries can be superimposed and displayed. Maps can be generated in real time, showing the location of data being reported on. The data can be imported and exported in various formats; the GIS map data can be exported in various coordinate systems. During nightly processes, GIS data for the “Rail Network”, “Maximum Speeds allowed”, and “Electrical Power Network and Masts” are automatically generated, ensuring this GIS data is always up to date.

SBB, the largest travel and transport company in Switzerland, has a reputation as one of word’s most reliable and best managed railroads. SSB transports 336 million annual passengers and 195,000 tonnes of freight each day on a railway network composed of 3,175 route kilometers, 792 stations, and 1,167 level crossings. With the exception of the small cantons of Herisau and Appenzell, all of Switzerland’s cantonal capitals are served by the SBB network.