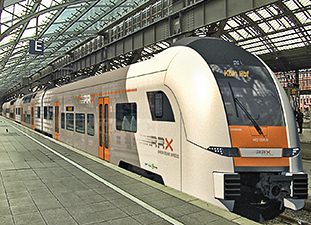 Munich, March 26, 2015—Siemens was officially awarded today a record-breaking order from the Rhine-Ruhr Metropolitan Region. The municipalities involved in the new Rhine-Ruhr Express (RRX) rail transport concept commissioned Siemens to supply 82 Desiro HC electric multiple units and to provide maintenance services for a period of 32 years. With a total volume of more than €1.7 billion, this is the largest regional rail transport order ever won by Siemens in Germany.

“This is a huge success for Siemens’ rail business. The project will secure existing high-quality jobs in North Rhine-Westphalia and create new ones. Our state-of-the-art train is good news for millions of commuters along the Rhine and Ruhr rivers in Germany’s most densely populated region,” said Jochen Eickholt, CEO of the Siemens Mobility Division. The company will not only supply the new trains, but also service them for 32 years. A service order of this scale is a first for the German rail industry. Siemens will build a maintenance facility in Dortmund-Eving, where up to four trains can be serviced simultaneously and around 100 new specialists will work in multiple shifts. Plans for the facility foresee a vehicle hall, specialized workshops, an outside washing station and stabling tracks for up to ten trains. Overall, Siemens will then have invested around 150 million Euros in its rail technology sites in the state of North Rhine-Westphalia.

Praised as the region’s project of the century, the RRX will help ease the steadily worsening traffic conditions along the Rhine and Ruhr when delivery of the trains begins in 2018. The region is one of the largest metropolitan areas in Europe, with a population of roughly ten million and numerous transit routes. In particular, the key route between Cologne and Dortmund has been heavily impaired for years by overburdened public transport networks and rail connections.

Through the optimized extension of the railway network and potential shift of traffic from road to rail, the RRX is expected to eliminate thousands of car trips every workday. The first RRX trains are scheduled to enter service by late 2018 and operate in the region at speeds up to 160 kilometers per hour. Plans call for quarter-hour service once the rail infrastructure project has been completed.

The Siemens order includes newly developed high-capacity, double-decker trains from the proven Desiro family. Each train consists of four cars, will be 105 meters long and have a seating capacity of 400. During operation, two units will be connected to form an eight-car express with 800 seats. Desiro trains are already operating in countries such as Germany, Belgium, the United Kingdom, Russia, Switzerland and Thailand, soon to be joined by Austria.

This press release, press pictures and additional material are available at www.siemens.com/press/RRX

For further information on the Mobility Division, please see www.siemens.com/mobility

Siemens AG (Berlin and Munich) is a global technology powerhouse that has stood for engineering excellence, innovation, quality, reliability and internationality for more than 165 years. The company is active in more than 200 countries, focusing on the areas of electrification, automation and digitalization. One of the world’s largest producers of energy-efficient, resource-saving technologies, Siemens is No. 1 in offshore wind turbine construction, a leading supplier of combined cycle turbines for power generation, a major provider of power transmission solutions and a pioneer in infrastructure solutions as well as automation, drive and software solutions for industry. The company is also a leading provider of medical imaging equipment – such as computed tomography and magnetic resonance imaging systems – and a leader in laboratory diagnostics as well as clinical IT. In fiscal 2014, which ended on September 30, 2014, Siemens generated revenue from continuing operations of €71.9 billion and net income of €5.5 billion. At the end of September 2014, the company had around 343,000 employees worldwide. Further information is available on the Internet at www.siemens.com.