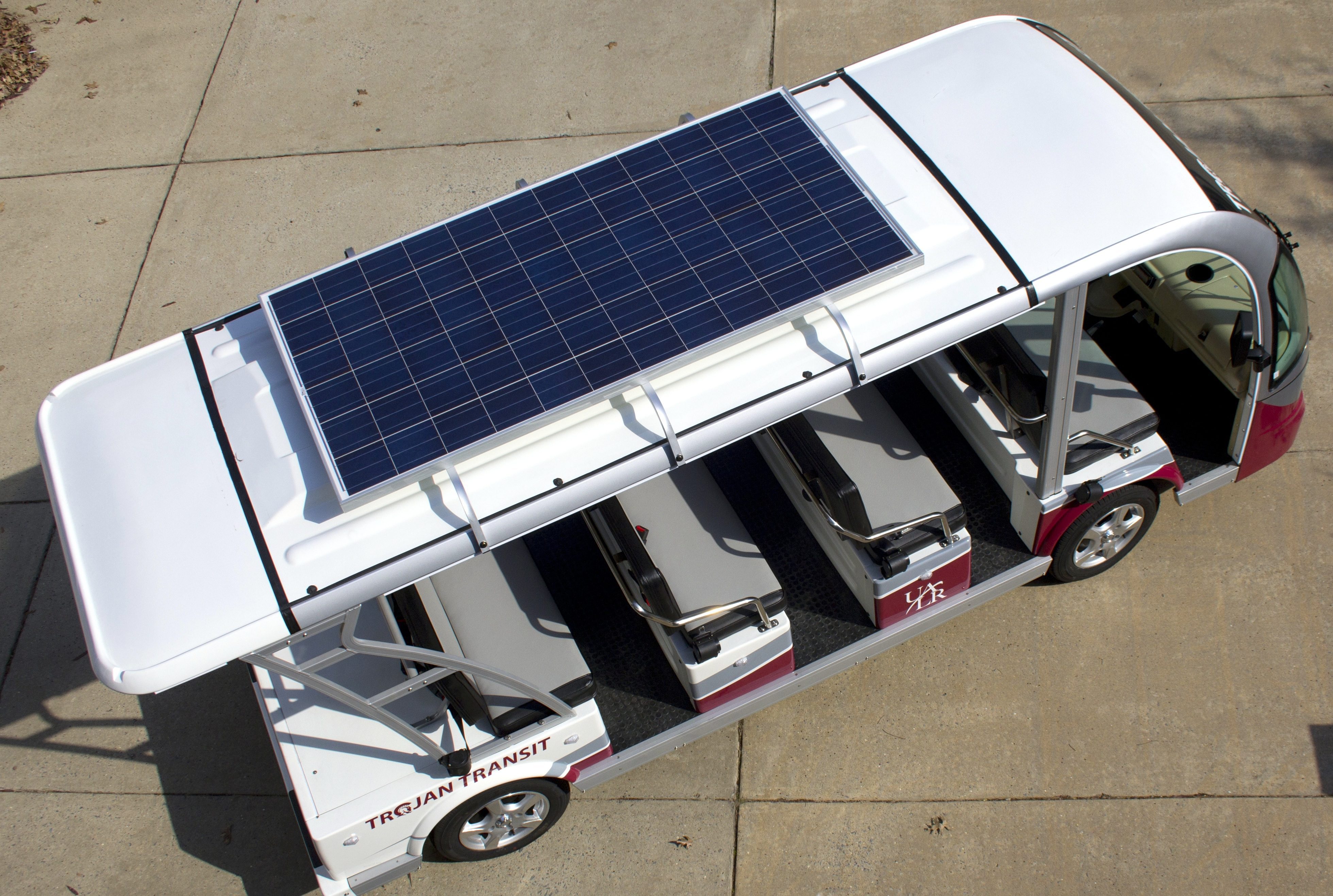 LITTLE ROCK, March 26, 2015—UALR will roll out a new Trojan Transit system on Monday, March 30, designed to enhance safety and sustainability initiatives and help students and employees navigate the campus faster and easier.

The new six-vehicle transit system will feature battery-operated and solar-powered vehicles that will replace the contracted diesel-fueled trolley shuttle service that has been in use since January 2012, according to Associate Vice Chancellor of Facilities Management Dave Millay.

The new vehicles include three 12-passenger shuttles that will operate north and south campus routes from 7 a.m. to 10 p.m. Monday through Thursday and from 7 a.m. to 3 p.m. on Fridays.

The transit service will also include three eight-passenger transit “taxis” that will be driven by UALR Department of Public Safety security guards to pick up students, employees, and campus guests and transport them directly from place to place across campus. Several of the new vehicles are compliant with the Americans with Disabilities Act (ADA).

“As we transition to a better fuel-efficient means of transporting passengers safely, this new fleet will certainly reduce our carbon footprint and be more cost effective in the long term,” Millay said. The university will operate the transit system internally.

Chancellor Joel E. Anderson said the first priority in reviewing any changes to the current transit system was the safety of students who are primary passengers.

The transit shuttles, smaller than the trolleys, will offer flexibility in schedules and routes, and the transit taxis will offer direct access from campus parking lots and buildings to specific locations. The new shuttles will also provide safe and more convenient travel between residence halls and distant parking lots to the Jack Stephens Center on game nights.

“It is important to all of us that UALR is a safe place and perceived as such,” Anderson said. “The new service is one of first initiatives that we have been able to initiate after a new student safety fee was approved by the UA Board of Trustees. I think it will be an instant success.”

The new transit system will utilize GPS tracking to allow riders to know where the shuttles are on the routes and when they will arrive at the next stop. The program can be accessed at ualr.edu/safety/transit. There is also a free mobile app, Ride Systems, available for both iPhone and Android users. First-time users should select “UALR” from the list of available schools.

More about the transit system
Two shuttles will run north and south routes with six stops approximately every 30 minutes from 7 a.m. to 4 p.m. Monday through Thursday and from 7 a.m. to 3 p.m. Friday.

The south route and evening routes will include a stop at University Village apartments. An extra van will run hourly stops to South Oaks Apartments.

UALR is testing the routes this week.