/ Corporate / Department of Energy, Department of the Interior and Army Corps of Engineers Renew Five-Year Partnership to Advance Hydropower

Department of Energy, Department of the Interior and Army Corps of Engineers Renew Five-Year Partnership to Advance Hydropower 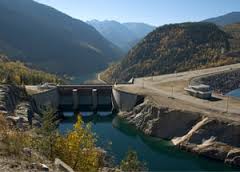 At a signing ceremony at the Department of the Interior, the agencies celebrated the accomplishments of the first five years of this partnership, and recognized the value of continued collaboration driven by a detailed, shared action plan. The partnership will help meet the need for reliable, affordable and environmentally sustainable hydropower by strengthening a long-term working relationship, sharing priorities, and aligning ongoing and future renewable energy development efforts across the agencies.

The Memorandum of Understanding for Hydropower – Sustainable Hydropower Action Plan (Phase II) announced today renews the agencies’ commitment with a second phase of collaboration. This action plan aims to support the Obama Administration’s goals for doubling renewable energy generation by 2020 and improving federal permitting processes for clean energy as called for in the President’s Climate Action Plan.

“Through the advancement of hydropower, the three agencies are helping meet President Obama’s goal of generating 80 percent of our energy from clean energy sources by 2035,” Deputy Secretary of the Interior Michael L. Connor said.  “This agreement continues Interior’s commitment to renewable energy projects and expands on the original MOU by adding more goals and action items.”

“Our collaboration with the Department of the Interior and the U.S. Army Corps of Engineers enables our nation to responsibly expand America’s largest source of clean, renewable energy” said Deputy Secretary of Energy Elizabeth Sherwood-Randall. “I am excited about this opportunity to diversify our nation’s energy portfolio, boost our energy security, and reduce carbon emissions with the advanced hydropower technologies that the Department of Energy is helping to develop and deploy.”

“As a leader in the hydropower industry, the Army is proud of our hydroelectric generation and greatly supports the extension of the original MOU as well as the Action Plan for Phase II,” said Assistant Secretary of the Army for Civil Works Jo-Ellen Darcy. “It will help meet the Nation’s needs for reliable, affordable, and environmentally sustainable hydropower by building a long-term working relationship, prioritizing similar goals, and aligning ongoing and future renewable energy development efforts between DOE, DOI, and the Army Corps of Engineers.”

Through continued collaboration and partnerships with other federal agencies, the hydropower industry, the research community, and numerous stakeholders, the agencies will work toward the following objectives, among others:

Over the past five years, through collaboration and partnerships with other federal agencies, the hydropower industry, the research community, and numerous stakeholders, the agencies have successfully fulfilled the commitments of the original MOU. Examples of these accomplishments include:

Renewal of this MOU will help advance hydropower development across the United States, helping further unleash the potential of this reliable, proven source of renewable energy.

To learn about the Energy Department’s work in hydropower, please visit the Office of Energy Efficiency and Renewable Energy’s hydropower website. To learn more about how hydropower captures energy from flowing water, watch this Energy 101 video.