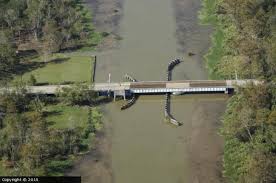 ALBANY, March 24, 2015—Governor Andrew M. Cuomo today announced that work starts this week on a $10.5 million project to replace four bridges on the Adirondack Northway –Interstate 87 – in Clinton County. The bridges are among the first under contract as part of New York State’s Scour Critical/Flood Prone Bridge Program. The Governor has requested $518 million in funding from the Federal Emergency Management Agency (FEMA) to strengthen 105 bridges through its Hazard Mitigation Grant Program.

“Strengthening our infrastructure and making it more resilient is crucial to meeting the new challenges presented by extreme weather,” Governor Cuomo said. “By replacing these four bridges, as well as others across the state, we are making our transportation networks stronger, more reliable and more prepared for future storms.”

FEMA has approved construction funding for 80 bridges totaling $278.4 million. Funding approval for the remaining 25 bridges is anticipated this spring.

Two pairs of bridges are being replaced on I-87 northbound and southbound, one set over the Little Ausable River in the Town of Peru and the other over the Salmon River in the Town of Plattsburgh, Clinton County. Luck Bros, Inc. of Plattsburgh is the contractor on the project, which is scheduled for completion in late 2016. During construction, posted speeds will be reduced and a single lane cross-over system will be used to maintain interstate traffic.

The goal of the program is to upgrade and enhance the resiliency of 105 scour-critical and flood prone bridges to ensure they are protected from future extreme weather events. The bridges were identified by the State Department of Transportation as the most at-risk for repeated flooding with a focus on structures in the Capital District, Long Island, Mid-Hudson, Mohawk Valley, North Country, Finger Lakes and Southern Tier regions.

In June 2013, Governor Cuomo announced a call for projects to be funded by the Hazard Mitigation Grant Program, which assists local governments and non-profit organizations in rebuilding stronger, more sustainable communities. Authorized by FEMA, the program aims to increase the State’s resiliency, reduce hardship and mitigate the risks of loss and damage associated with future disasters.

This program is the product of an unprecedented collaboration between the State’s Department of Transportation, Division of Homeland Security and Emergency Services and Governor’s Office of Storm Recovery. It puts New York State at the cutting edge of innovative flood recovery and mitigation activities.

Bridge scour erodes and carries away foundation materials, such as sand and rocks, from around and beneath bridge abutments, piers, foundations and embankments. Upgrading these bridges will ensure access to emergency services during and after flood events, as well as reduce the risk of flooding where bridge openings cause rivers and streams to back up.

All of the bridges included in this program were built to the codes and standards of their time and remain safe and open for everyday traffic. However, due to a variety of severe weather events and the increasing frequency of major storms and floods, they are vulnerable to scour and flooding caused by the intensity and velocity of water from extreme natural events.

Completion of the program will afford residents of communities across the State continued access to critical lifesaving services in the event of an emergency. Additionally, strengthening bridges will reduce the potential for highway travel delays and detours during heavy rains and floods.

New York State Department of Transportation Commissioner Joan McDonald said, “Through Governor Cuomo’s leadership and the collaboration of our state, local and federal partners, we are working to ensure that our roads and bridges are hardened against harsh weather. This project will strengthen four bridges along a major corridor that is critically important to the communities and businesses across our State.”

Senator Charles Schumer said “The Northway is a critical North-South route, facilitating interstate and cross-border commerce and tourism every single day, so it is imperative that the bridges along I-87 are well-maintained and safe. The destructive flooding that has plagued the Little Au Sable and the Salmon Rivers in recent years has led to bridge damage, and I am pleased that these federal funds will help upgrade structures to be more resilient in the face of future storms and flooding. Spending money now on these important infrastructure projects is an important investment that will ultimately protect future local commerce and tourism.”

Senator Betty Little said, “The I-87 Northway is a vital connection between New York City and Canada and dozens of North Country communities I represent. A bridge washout would have an immediate and devastating impact on commerce and our quality of life. I appreciate Governor Cuomo and the Department of Transportation’s recognition of the need to strengthen these critical connections in Clinton County and applaud their advocacy in securing the federal funds to make it happen.”

Assemblywoman Janet Duprey said, “With the number of storms we have experienced in recent years resulting in serious flooding, I am pleased these four bridges on I-87 in the Towns of Peru and Plattsburgh will be replaced. I extend my thanks to Governor Cuomo, State DOT, Homeland Security and Emergency Services for assuring the safety of local residents and all who travel the Northway. I am particularly pleased Luck Bros, Inc, a local company, has been awarded the bid for this $10.5 million project providing local jobs for their employees.”

Bernard Bassett, Town Supervisor Town of Plattsburgh said, “The Adirondack Northway is critical to tourism and commerce in the North Country. Because of Governor Cuomo’s initiative, the Adirondack region and areas across the state are seeing highway bridges improved to withstand future storms and ensure that motorists can get where they need to go.”

Supervisor Peter Glushko, Town of Peru said, ”Communities across the North Country rely on I-87 for the commerce, convenience and accessibility it provides. We appreciate Governor Cuomo’s investment in these bridges, enhancing highway safety and providing resiliency for the future.