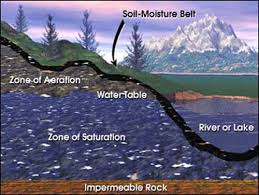 March 20, 2015—In celebration of the International Year of Soil 2015 (IYS), the Soil Science Society of America (SSSA) is coordinating a series of activities throughout to educate the public about the importance of soil. April’s theme is “Soils Clean and Capture Water.”

According to April’s IYS monthly leader Gary Pierzynski, “soil is a great water purifier. There are three ways that soil cleans water: physical, chemical and biological.” Here are some facts from Pierzynski, a soil science professor at Kansas State University.

1. Physical: the particles of soil act like a filter. The ideal soil has a distribution of pore sizes so it can filter water, while also allowing the water to pass through the soil.
2. Chemical: soil particles have a negative charge! That means that positive ions like calcium, magnesium and potassium can all be removed from passing water and retained by the soil. This is good, because each of these ions is a nutrient for plants! Some contaminants can be removed by this mechanism as well.
3. Biological: soil is the largest bioreactor on the planet. Within the soil, bacteria and fungi transform and decompose certain chemicals. Soil microbes can change organic forms of nitrogen into ammonium ions—and even into nitrogen gas. They can also decompose some organic pollutants!

Follow SSSA on Facebook athttps://www.facebook.com/SSSA.soils, Twitter at SSSA_Soils. SSSA also has a blog, Soils Matter, athttp://soilsmatter.wordpress.com/. Additional soils information is on www.soils.org/discover-soils, for teachers at www.soils4teachers.org, and for students through 12th grade, www.soils4kids.org.

The Soil Science Society of America (SSSA) is a progressive international scientific society that fosters the transfer of knowledge and practices to sustain global soils. Based in Madison, WI, and founded in 1936, SSSA is the professional home for 6,000+ members and 1,000+ certified professionals dedicated to advancing the field of soil science. The Society provides information about soils in relation to crop production, environmental quality, ecosystem sustainability, bioremediation, waste management, recycling, and wise land use.