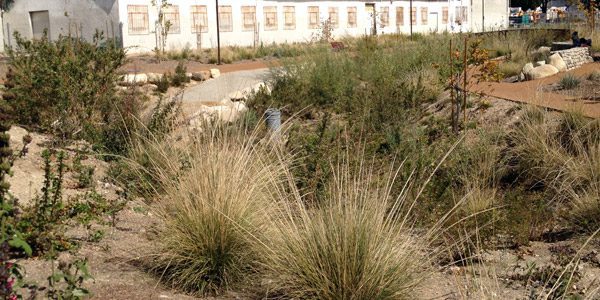 Los Angeles, Calif. —The Los Angeles River extends 52 miles through the LA region. The river has been encased in cement since the 1930s, in order to protect the fast-growing city from life-threatening floods. After undergoing scrutiny recently, the area has now become the focus of an extensive region-wide program to revitalize the area and create green space, while maintaining hydrologic and water quality requirements.

As part of this program, the Humboldt River Greenway project, located in the Lincoln Heights community between Avenues 18 and 19 in Los Angeles, became one of many Bureau of Engineering projects targeted for change. A small one-acre park was created in this former industrial field. The project includes daylighting the existing storm drain system (since it is buried underground) by constructing a stormwater greenway with a ”stream” ecosystem through a corridor along Humboldt Street. This project will enhance the water quality of the Los Angeles River by removing pollutants such as oil, bacteria and trash from the dry weather urban runoff. It will also provide natural habitat with the planting of native plants and a communal recreational space to promote the idea that urban streams are a valuable resource to be enjoyed by the community.

To address the stormwater runoff conditions that plagued the site, the City of Los Angeles chose a treatment solution from Contech Engineered Solutions. Specifically, a CDS hydrodynamic separation system was selected as the best solution for its ability to pre-treat runoff. The CDS system screens, separates and traps debris, sediment, oil and grease from the stormwater runoff before it reaches the Los Angeles River. In fact, the patented, non-blocking screen allows for 100% removal of floatables and neutrally buoyant material. In addition, the CDS system met the local requirement for “full trash capture,” while also providing a high level of pretreatment in a treatment train based on the Low Impact Development (LID) design methodology.

The project was funded by the City of Los Angeles Sanitation Department of Public Works. The project was selected by Storm Water Solutions Magazine as one of their Top 10 Projects of 2014.