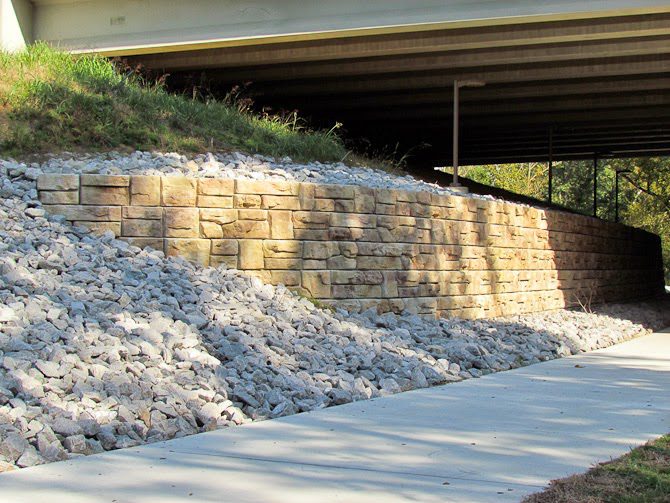 Redi-Rock International will be honored at the eleventh annual Michigan Celebrates Small Business event on May 7, 2015, at the Lansing Center in downtown Lansing.

Redi-Rock International is a growing Charlevoix-based company that has taken a seemingly boring idea (concrete block manufacturing) and turned it into a brand and a technical authority that has transformed the entire retaining wall industry since its founding in 2000.

Redi-Rock is a licensor of a proprietary steel forming system used to manufacture 2000-pound retaining wall blocks. Today, 130 independently owned and operated licensees around the globe provide retaining wall solutions for incredible projects. You’ll find Redi-Rock walls at the New England Patriots’ stadium, a Donald Trump golf course overlooking the Statue of Liberty, the FBI regional headquarters in Cincinnati, college campuses across North America, and the downtowns of some of the biggest US and Canadian cities.Redi-Rock is manufactured locally by MDC Contracting in Charlevoix, and you can find Redi-Rock walls throughout Northern Michigan at homes, business, and downtowns.

“There’s a lot more national and international business going on in Northern Michigan than most people realize,” said Jake Manthei, General Manager at Redi-Rock. “We’re excited to be one of the companies to watch because we want to create more quality jobs here in Northern Michigan and attract professionals back ‘Up North’.”

Redi-Rock expects to add several new production, engineering, and marketing people each year for the foreseeable future. Ben Manthei, founder of Redi-Rock, added: “This may sound trite, but our biggest asset really is the people. Our team is coming up with the tools, technology, and strategy that no one else is doing. We lead the pack, and we need sharp people to lead with us. Often, people tell us it’s their dream to retire ‘Up North’ but they never thought they’d be able to have a career here,” Ben Manthei said.

The Michigan 50 Companies to Watch Award, sponsored by Michigan Celebrates Small Business, honors growth-oriented businesses based on market expansion, job creation, technological innovation, and community impact. Companies represent a wide variety of industries. To be considered, companies must be privately held and headquartered in Michigan, have between six and 99 employees and generate between $750,000 to $50 million in annual revenue. The other Michigan 50 Companies to Watch are listed onlinehere.