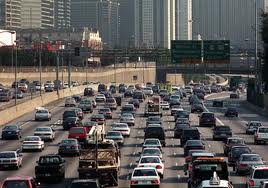 The new data reaffirm projections made by U.S. Transportation Secretary Anthony Foxx in “Beyond Traffic,” his 30-year vision for transportation, which shows significant increases in gridlock nationwide unless changes are made in the near-term.

“Americans are driving their cars at near-record levels, and being stuck in traffic is costing drivers an average of nearly five days a year,” said Secretary Foxx. “To ensure this problem doesn’t get worse, greater innovations and investments are needed. We can’t keep treating America’s 21st-century traffic needs with 20th-century solutions.”

Drivers in December 2014 logged 251.4 billion miles, the highest level for any December since data collection began in 1939. At 5 percent higher than the previous December, it was the year’s biggest single-month increase and the nation’s tenth consecutive month of VMT growth.

Traffic in the South Gulf – a block of eight states including Texas and Kentucky – rose to nearly 49.1 billion vehicle miles traveled (VMT), a gain of 6.4 percent over the previous December and the tenth consecutive month of increased traffic for the region.

All states recorded traffic increases in December. At 10.5 percent, Indiana led the nation with the largest single-state traffic increase compared to the same month a year earlier, followed closely by Oklahoma at 9.3 percent and Montana at 8 percent.

“Data like these are critical to helping federal and state transportation leaders understand the challenges facing American drivers,” said Deputy Federal Highway Administrator Gregory Nadeau. “The nation’s growing demand on roads and bridges underscores what we have been saying – increased investment is needed if we are to keep our roads from becoming parking lots.”

To review the VMT data in FHWA’s “Traffic Volume Trends” reports, which are based on information collected from more than 2,000 road-mounted sensors nationwide, visithttp://www.fhwa.dot.gov/policyinformation/travel_monitoring/tvt.cfm.