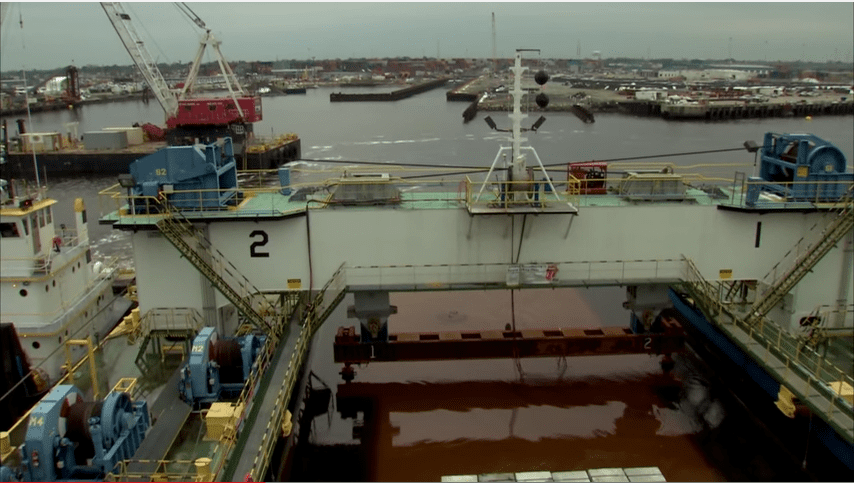 PORTSMOUTH, Va., March 12, 2015—This week the Elizabeth River Tunnels (ERT) Project team immersed the sixth of eleven tunnel elements that will make up the new Midtown Tunnel, successfully joining it to the five previously placed elements. Element six bears the distinction of being the element placed at the deepest point for the new tunnel – approximately 90 feet below the surface.

A large, specially designed, pontoon-style boat, known as a lay barge was used to move Element 6 into position in the river and lower it to the prepared river bed. This completes immersion of the first litter of elements floated down the Chesapeake Bay from the element fabrication site in Sparrows Point, Maryland last spring.

The Project team has made significant progress on fabrication of the remaining five tunnel elements in Sparrows Point, Maryland. Now that all the structural concrete pours for Elements 7 to 11 are complete, remaining work continues on outfitting the elements with ballast tanks, pumps and controls, drainage pipes, bulkheads and push-pull knees, Gina gaskets, fenders, and waterproofing in preparation for float out.

Once the final litter of Elements 7 to 11 reaches Portsmouth later this spring, they will be placed across the Elizabeth River at the rate of approximately one every five weeks continuing from the Portsmouth side moving eastward to Norfolk. The new Midtown Tunnel will become the westbound tunnel, carrying traffic from Norfolk to Portsmouth and is scheduled for completion in December 2016.

Headquartered in Portsmouth, Virginia, Elizabeth River Crossings OpCo, LLC, is the private partner of the Virginia Department of Transportation for the design, construction, finance, operations and maintenance of the Elizabeth River Tunnels Project, with SKW Constructors, JV as design-build contractor. Located in Norfolk and Portsmouth, Virginia, the Project is comprised of a new two-lane tunnel under the Elizabeth River parallel to the existing Midtown Tunnel; fire, life and safety modifications and upgrades to the existing Midtown Tunnel and Downtown Tunnels; interchange modifications in Norfolk and Portsmouth; and extending the MLK Freeway in Portsmouth from London Boulevard to I-264. More information can be found at www.DriveERT.com.