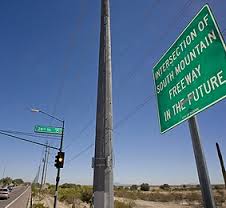 PHOENIX, March 10, 2015—The Valley’s Loop 202 South Mountain Freeway, proposed by regional planners since the 1980s, has received final approval from the Federal Highway Administration, paving the way for the Arizona Department of Transportation to move the project forward.

The Record of Decision, signed March 5 by the Federal Highway Administration, grants the final approval necessary for ADOT to begin the process of acquiring right of way, complete the design and begin construction of the 22-mile-long freeway to serve the metro Phoenix region.

The Record of Decision will allow ADOT to begin final design and subsequent construction of the South Mountain Freeway. Acquisition of right of way is expected to begin immediately. ADOT has determined that, pursuant to an unsolicited proposal submitted to construct the freeway, construction will follow a public-private partnership path, helping to speed construction and reduce overall costs. The freeway would not be tolled under any public-private partnership proposal, but would include a private group involved with final design, construction and a 30-year agreement to maintain the freeway.

“The South Mountain Freeway has been approved as a part of two elections that have provided the region with additional transportation funding. Voters recognized the need and the benefits of this project to provide connectivity, travel reliability and route options for a growing region,” said ADOT Director John Halikowski. “Both ADOT and the Maricopa Association of Governments agree this is a critically needed project, and ADOT is breaking new ground by moving it forward under a public-private partnership agreement to more closely involve the private sector, helping to save money and speed construction.”

The proposed South Mountain Freeway has been a critical part of the Maricopa Association of Governments’ Regional Freeway Program since it was first included in funding through Proposition 300, approved by Maricopa County voters in 1985. The freeway was also part of the Regional Transportation Plan funding passed by Maricopa County voters in 2004 through Proposition 400.

The South Mountain Freeway is the last piece to complete the Loop 202 and Loop 101 freeway system necessary for high-quality regional mobility, according to regional planners.

“This is a great day and an important milestone in the history of the Valley’s transportation system,” said Maricopa Association of Governments Chair Michael LeVault, mayor of Youngtown. “It has been a long time coming, and we look forward to the improved mobility and economic opportunities that this freeway facility will bring to our region.”

The Federal Highway Administration has decided to identify the Preferred Alternative (a combination of the W59 and E1 Alternatives) as the Selected Alternative for the South Mountain Freeway project. This decision along with supporting information, including responses to public comments received on the Final Environmental Impact Statement, is documented in the Record of Decision.

The freeway will be constructed with four lanes in each direction – three general-use lanes and one HOV lane – and modern features that have made Arizona freeways stand apart from other states for a generation, including rubberized asphalt and aesthetics designed in partnership with the community. The $1.9 billion project is expected to take about four years to construct.

For more information, or to view the Record of Decision, visit azdot.gov/SouthMountainFreeway.