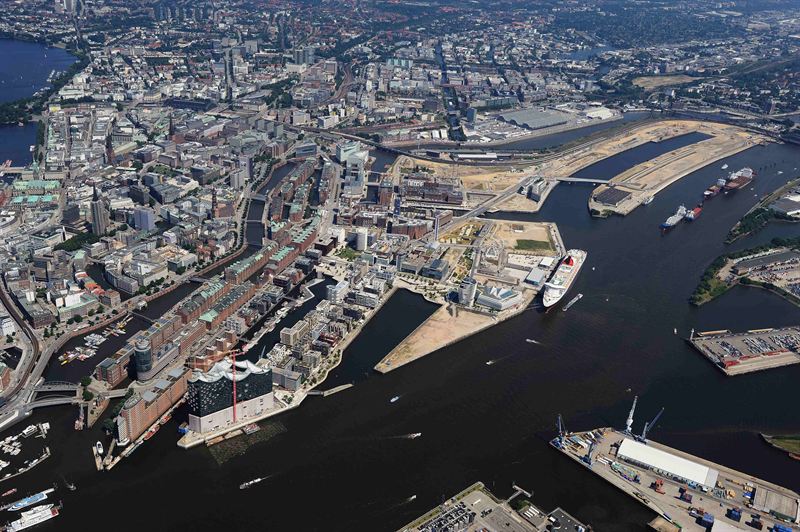 Lying on the seafront, Überseequartier is the commercial heart of HafenCity (Europe’s largest urban development project) and a rapidly growing area. On an area of 10.5 hectares, Überseequartier is a complex urban quarter. Up to 6,000 people will be employed and around 2,000 live here eventually. When the neighborhood is finished, 40,000–50,000 visitors a day are expected. In 2015, the architecture of Southern Überseequartier is being defined.

Unibail-Rodamco, Europe’s leading listed commercial property company, has signed an agreement with the City of Hamburg to acquire and develop land in the southern area of Überseequartier. Working in partnership with the City of Hamburg, Unibail-Rodamco will create (through its German subsidiary, mfi AG) an exceptional destination on the banks of the Elbe, in the heart of a unique cultural and tourist area. The project will see the creation of shops and restaurants, a multiplex cinema and cruise terminal, as well as offices, homes and hotels. Construction is provisionally scheduled to begin in 2017, with the main part of the project due to open to the public in the second half of 2021. Total investment stands at €860 million.

The site will give visitors a new shopping experience with 190 stores, including the world’s leading premium brands. Unibail-Rodamco will offer outstanding service quality with its 4-Star label, as well as its latest innovations, such as iconic “The Designer Gallery” shop fronts and the Dining Experience™ (with a stunning dining plaza overlooking the Elbe). The project will also include next-generation offices designed by world-renowned architect Christian de Portzamparc, winner of the 1994 Pritzker Architecture Prize.

Mixed-use: In planning the built-up area, tertiary and residential use have been carefully balanced. Roughly half of Überseequartier’s built-up area will be devoted to offices, leisure and retail, with the remaining 92,700 m2 occupied by housing.

A transport hub: The future cruise terminal will occupy a floor area of 4600 m2 spread over two levels, part of a larger complex—including a hotel and shops—which will be perfectly integrated into the surroundings. Once complete, the project will provide 2950 extra parking spaces, a U-Bahn and bus station, and an underground taxi rank, to handle the increasing number of visitors disembarking cruise ships and to improve transport links with the city centre.

Focus on retail: Retail will be bigger and more diversified in Überseequartier. For both Überseequartier and HafenCity, the successful location of shops will play a key role, not just in bringing to life the district itself, but also in its integration with the rest of the city centre.

To this end, there will be 80,500 m2 of retail space, considerably increasing shopping diversity. The presence of strong brands will ensure greater shopper footfall, even midweek, with positive knock-on effects for visitors to small- and medium-sized shops, as well as street-level stores in HafenCity.

Überseequartier will also increase pedestrian traffic between the Elbphilharmonie Opera, Speicherstadt and buildings planned for Strandkai, Shanghaiallee and the Baakenhafen district. Growing numbers of tourists to Hamburg mean that, as part of this new approach, retail can be combined with entertainment, boosting the overall number of visitors, particularly during the evening.

Urban development in keeping with the city

The new urban development initiative for Überseequartier Sud retains aesthetic elements found in existing buildings, such as the use of brick, giving the entire central area of HafenCity a distinct, shared identity. The north-south orientation of Überseeboulevard will provide an attractive route between Speicherstadt and the Elbe. Überseequartier Sud will remain an open urban space offering effective shelter from inclement weather, while at the same positively impacting the overall development of HafenCity and its links with the existing city centre.