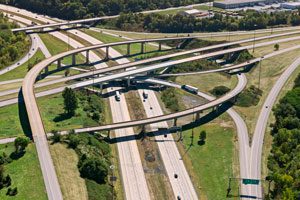 Harrisburg, Pa., March 6, 2015— The I-81 River Relief Route Emergency Design Project in Harrisburg, Pennsylvania, has won the American Council of Engineering Companies of Pennsylvania (ACEC/PA) Grand Conceptor Award in the organization’s 2015 Diamond Awards for Engineering Excellence competition. The Grand Conceptor is the top award of the competition, which recognizes outstanding achievements of Pennsylvania’s engineering firms. Gannett Fleming served as lead design consultant for the project.

On May 9, 2013, a tanker truck carrying 7,500 gallons of diesel fuel overturned on the I-81 northbound ramp to U.S. Route 22, and a massive fire halted traffic on one of the busiest sections of the interstate. The Pennsylvania Department of Transportation (PennDOT) teamed with Gannett Fleming to coordinate a rapid response to alleviate traffic and begin the reconstruction process immediately.

“We’re proud to have worked alongside PennDOT, District 8-0, to successfully handle this emergency project, and are honored to receive the Grand Conceptor Award,” said Scott Zeevaart, PE, Gannett Fleming vice president and transportation division director. “The responsiveness and coordination between the District and the various project team members ultimately led to its successful completion.”

Given the 134,000 vehicle average daily traffic and economic importance of this stretch of I-81, the reconstruction project required Accelerated Bridge Construction techniques to help PennDOT repair and reopen the interchange as soon as possible. The most critical aspect from the moment of the accident to the completion of the project was the ability of the design engineers to work directly with the contractors, fabricators, and suppliers.

Working with the demolition contractor allowed the damaged structures to be removed in four days and I-81 to be reopened.

Through close coordination with High Steel Structures Inc. (HSSI), Gannett Fleming was able to review and approve the shop drawings for fabrication of the new steel superstructure in a matter of days. The two companies’ past experience helped in this process. Gannett Fleming designed the almost 40-year old interchange, and HSSI had done the steel fabrication in 1973; both firms also had the original project drawings, which expedited the design.

The interchange complex consists of three levels and directional curved ramp alignments, limiting access points to reconstruct the damaged structures. The design team responded by not only repairing the structures, but improving their safety characteristics. Through a highly coordinated process, the interchange was repaired and reopened seven months after the fire.

The Grand Conceptor Award was presented to the project team on March 2, 2015, at the ACEC/PA Engineering Excellence Awards Gala in Hershey, Pennsylvania.