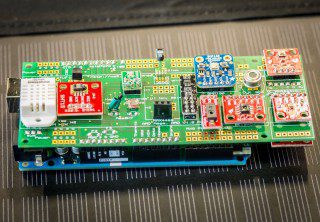 March 6, 2015—As urban populations increase, so too does the complexity involved in maintaining basic services like clean water and emergency services. But one of the biggest barriers to making cities “smarter”—for example, comprehensively monitoring sources of waterway pollutants in real time—is quick and easy access to data.

Future scenarios like these depend on technology not yet widely available. Future “smart” cities would have to feature hundreds, maybe thousands, of strategically placed sensors. These devices would record everything from air pressure and temperature to microbial content, and the data would be relayed instantly to the laptops of people who can make decisions based on what they are seeing.

Researchers at the U.S. Department of Energy’s Argonne National Laboratory are laying the groundwork for that future now. Their newly developed Waggle platform outfits researchers with a next-generation data collection experience. Featuring the same type of circuit board and real-time processing speeds inside your smartphone, “Wagglers” can add their own mix of sensors, specific to what they’re researching, and install programs onto a single low-power “system on a chip” (SoC) computer board, complete with a Linux-based operating system to control them.

“Waggle can gather the data, send it up to the cloud and get a really fantastic picture of whatever physical processes the researcher wants, whether it’s city or climate data or even hyperspectral data from plants,” said Argonne senior computer scientist and project leader Pete Beckman. “This is the equivalent of a microscope looking at a cell, except we’re using sensors, turning them towards the environment and getting the most comprehensive picture yet of what is actually happening.”

Waggle began as a small project characterizing heat and temperature fluctuations inside a supercomputer’s machine room. Simple devices lined the computer racks, recording and transmitting data from air flow and temperature. Soon, though, researchers realized that what they really needed was a computing platform for sensors to process the data they were receiving.

Once a sensor is placed in its environment, “the data just sits there isolated,” said Argonne materials scientist and 1851 Royal Commission Design Fellow, Jacqueline Cole.” And if anything goes wrong during this period of testing, then you’ve got nothing to come back to. With Waggle, you can monitor the project website, and if something looks kind of screwy you can go in and correct it.”

Another Waggle feature is in-situ processing.

“Waggle includes advanced management features that constantly monitor power use and can be programmed to respond to specific conditions like temperature and light intensity or a data signature from a camera or other sensor,” said Argonne assistant computer scientist Rajesh Sankaran. “Very few people are experts in embedded computer systems, so we’ve provided a framework for writing Waggle code that can run in-situ and have taken the guesswork out of the data-collection process, providing researchers with a way to automatically plug, play and retrieve safe and secure data from the cloud.”

Environmental scientists have begun to take notice and plan to use the Waggle platform to collect their data for future projects.

Jack Gilbert, an Argonne microbial ecologist, is part of a team working with the City of Chicago to create a dynamic microbiome map of Chicago-area waterways. His research goals include understanding how sewage and human activity affect the microbial quality of urban environments and waterways.

“Waggle can help us with environmental context and give us the ability to create an automated sensing grid,” said Gilbert. “We can then draw maps of how those parameters vary, so we can explore areas of greater or lesser activity inside a space. It’s incredibly valuable for us to have that continuously connected grid for data generation.”

From city buildings to neighborhoods, Argonne computational climate scientist Rob Jacob worries about “heat islands.” This is a phenomenon where an urban area is warmer than the countryside surrounding it. This is also what contributed to the death toll of the 1995 Chicago heat wave. When Jacob begins working with the Waggle platform, he and his team will be working to understand the data, but he can envision a future where the types of sensor networks Waggle allows can be used to predict urban heat waves, flooding and other weather hazards.

“There’s a lot of temperature and meteorological variability within a city—basically because the buildings, parks and other materials store heat differently and it’s difficult to measure all the variability,” said Jacob. “But Waggle’s low price point and scalability make it possible to get very dense coverage throughout different areas and ultimately a better understanding of where and how these heat islands will occur.”

Argonne’s scientists are also working with the City of Chicago to use Waggle as a platform to increase the spatial and temporal data available for a range of scientific and “smart city” applications. From climate studies to understanding the dynamics of particular types of air pollution to identifying trends in noise or increases in pedestrian traffic—the Waggle system can effectively move the city towards data-driven policy.

Led by Charlie Catlett, work done by the Computation Institute’s Urban Center for Computation and Data (UrbanCCD) has fostered partnerships with industry, the city of Chicago, and the School of the Art Institute of Chicago. UrbanCCD leads this effort on behalf of Argonne and the University of Chicago in order to design and secure an urban sensor platform for initial deployment in 2015. Charlie, also a key part of the Waggle team, said “leveraging the Waggle platform allowed us to co-engineer a versatile new platform for the Array of Things and the city of Chicago.” To date, over a dozen cities in the U.S., Europe, and Asia have requested Array of Things deployments, extending the impact of the Waggle project worldwide.

Beckman and his team began collecting data in the field for the first time in October. New installations will soon be placed on the campuses of DePaul University, the University of Chicago and the School of the Art Institute. In addition to adding new sensors and improved cloud computing support, the team’s next steps includes plans to offer Waggle kits to scientists to support evaluation and hack-a-thons, allowing projects to extend and modify the platform for their own science project.

Lessons learned in the initial Chicago deployment, and by 2016 in other cities, will provide important design feedback as the systems are deployed in many settings with respect to geography and climate.

Argonne National Laboratory seeks solutions to pressing national problems in science and technology. The nation’s first national laboratory, Argonne conducts leading-edge basic and applied scientific research in virtually every scientific discipline. Argonne researchers work closely with researchers from hundreds of companies, universities, and federal, state and municipal agencies to help them solve their specific problems, advance America’s scientific leadership and prepare the nation for a better future. With employees from more than 60 nations. Argonne is supported by the Office of Science of the U.S. Department of Energy. The Office of Science is the single largest supporter of basic research in the physical sciences in the United States, and is working to address some of the most pressing challenges of our time. For more information, please visit science.energy.gov.