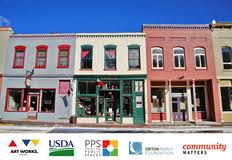 Beginning July 1, 2012, the Citizens’ Institute on Rural Design (CIRD) will be a partnership among the National Endowment for the Arts (NEA), the U.S. Department of Agriculture, and Project for Public Spaces, along with the Orton Family Foundation and the CommunityMatters Partnership.

CIRD does this through design workshops that gather local leaders together with experts in planning, design, and creative placemaking to assist with locally identified issues. Since the program’s inception in 1991, CIRD has convened more than 60 workshops in all regions of the country, empowering residents to recognize and leverage their local assets to build better places to live, work, and play.

“The future of many rural towns will be shaped by how well they can create vibrant communities where people want to be,” said USDA Deputy Under Secretary of Rural Development Doug O’Brien. “Arts investments in small towns can be an integral component of driving economic vitality by attracting residents and visitors alike to the main streets which are an enduring symbol — and critical to the future — of rural communities.”

“As I travel around the country, I see more and more evidence of how creative assets can stimulate local economies,” said NEA Chairman Rocco Landesman. “In rural areas there is a particular need to bring people physically together, and the arts and good design can be the catalysts for that. In its new configuration, CIRD will build on 20 years of experience and expand its work in rural settings by creating a strong knowledge network, providing access to innovative tools, and disseminating best practices.”

The new group of partners leading CIRD offers a depth and breadth of expertise along with additional initiative components that together will allow CIRD to help more American towns find better design solutions to the challenges of growth and development. Those new program components include pre-workshop training calls, post-workshop follow-up, and online resources.

Project for Public Spaces (PPS) is a planning, design, and educational organization dedicated to helping people build stronger communities by creating attractive and vital public spaces. Their mission of supporting placemaking meshes closely with the NEA’s emphasis on helping communities shape their physical and social character through the arts.

The Orton Family Foundation’s pioneering Heart & Soul Community Planning approach puts people and their attachment to place at the center of the planning process, and gives towns the knowhow to steer their future. The Foundation’s success building capacity in rural communities will enhance CIRD’s ability to create lasting change.

The CommunityMatters Partnership, initiated by the Orton Family Foundation, is a network of programs and experts working to support community development. The partnership champions the idea that people have the power to solve their community’s problems and shape its future.

The Department of Agriculture will use its staff, in particular its rural development network across the country, to increase the number and quality of applications to the program and to serve on panels to select communities for workshops.

“Rural communities across the country are expressing demand for new models for planning, design, community engagement, and creative placemaking. By supporting local capacity-building on an ongoing basis, we can help CIRD evolve as the network that rural communities need,” said President of Project for Public Spaces Fred Kent.

“Over recent decades too many small towns have gone from unique to uniform, subject to cookie-cutter design and development,” said Bill Roper, president and CEO of the Orton Family Foundation. “But people have the power to weave a new community narrative, one that enhances their town’s own heart and soul. We are excited to bring together all the resources of this partnership to help America’s rural communities thrive.”

Prior to Project for Public Spaces, CIRD was managed in partnership with the State University of New York at Syracuse and the school’s landscape architecture faculty led by Richard S. Hawks and Shelly S. Mastran. The NEA extends its sincere thanks to SUNY Syracuse and Mr. Hawks and Ms. Mastran for their leadership, and for strengthening the program and extending its reach.

On June 29, 2012, Hawks and Mastran will give a presentation on CIRD to the National Council on the Arts, the NEA’s advisory body. That presentation will be webcast live at 9:00 EDT at arts.gov and archived on the NEA website by July 12 also at arts.gov.

Over the summer of 2012, CIRD partners will assemble a task force to develop guidelines for communities to apply to host a workshop. Guidelines will be distributed in Fall 2012 with a deadline expected in December 2012.  A panel will review the applications and selected communities will be announced in early January 2013.

In addition, on July 12 the NEA will announce the recipients of Our Town 2012 grants to support creative placemaking projects across the country. This is the second year of the program.

About the National Endowment for the Arts

The National Endowment for the Arts was established by Congress in 1965 as an independent agency of the federal government. To date, the NEA has awarded more than $4 billion to support artistic excellence, creativity, and innovation for the benefit of individuals and communities. The NEA extends its work through partnerships with state arts agencies, local leaders, other federal agencies, and the philanthropic sector. To join the discussion on how art works, visit the NEA at arts.gov.

About Project for Public Spaces

Project for Public Spaces (PPS) is a nonprofit planning, design, and educational organization dedicated to helping people create and sustain public spaces that build stronger communities.  Through a Placemaking approach we help citizens transform their public spaces into vital places that highlight local assets, spur rejuvenation and serve common needs. Founded in 1975, PPS has completed projects in over 2,500 communities and all 50 US states.  PPS has become an internationally recognized center for resources, tools, and inspiration about Placemaking. pps.org

About the Orton Family Foundation

The Orton Family Foundation, founded in 1995, helps small cities and towns harness the inherent ability of citizens to imagine and achieve a culturally and economically vibrant future for their community. The Foundation’s Heart & Soul approach supports citizens in steering their town’s future by discovering the characteristics and attributes valued most in their communities and, then, by placing those shared values at the center of local decision making. orton.org